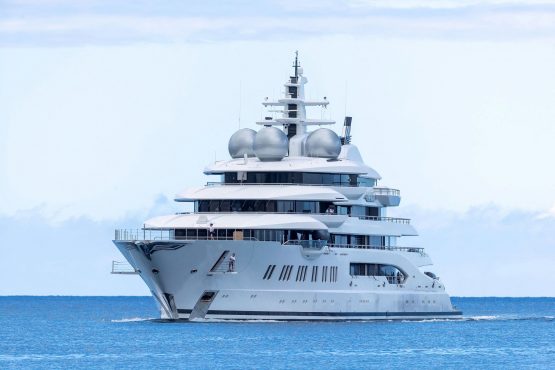 The yacht Amadea of sanctioned Russian Oligarch Suleiman Kerimov, seized by the Fiji government at the request of the US, arrives at the Honolulu Harbor, Hawaii, June 16, 2022. Image: Eugene Tanner/AFP/Getty Images

When the $325 million Amadea superyacht that’s been linked to Russian billionaire Suleiman Kerimov sailed into Fiji in April, the captain may have figured he had found a safe haven.

The laid-back South Pacific island nation hadn’t joined in a global push to impose sanctions on Russia and many of President Vladimir Putin’s wealthy supporters, and had just a few weeks before abstained from a United Nations resolution supporting Ukraine’s territorial integrity.

Yet a week after the Amadea arrived, Fiji authorities detained the luxurious yacht at the request of the US government, which argued that Kerimov — who has been sanctioned for his ties to Putin — was the true owner of the ship. The US eventually won a series of legal challenges and seized the vessel, sailing it to Honolulu last week.

The costly episode shows how Russian tycoons are running out of places to park their floating palaces, four months after their country’s invasion of Ukraine. The US and Europe are going after their superyachts, villas and other assets because of their ties to Putin. Already, more than a dozen boats worth more than $2.25 billion have been seized by the US, EU nations and willing allies — such as Fiji. 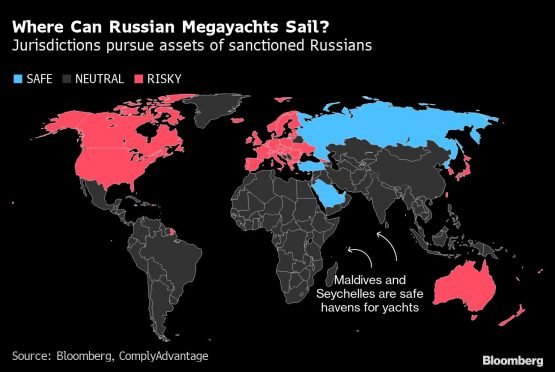 The US has formed a taskforce dubbed KleptoCapture to pursue the assets of Russian oligarchs. The unit, along with the Federal Bureau of Investigation, the US Marshals Service, and Coast Guard, sent agents to Fiji to pursue the Amadea. In Europe, Germany, Italy, Spain and other governments have seized ultra-luxurious vessels, with the biggest prize so far Russian billionaire Alisher Usmanov’s Dilbar, which is valued at as much as $750 million.

After the Amadea was first seized, US Deputy Attorney General Lisa O. Monaco issued a warning to Russian tycoons, saying the Justice Department “had its eyes on every yacht purchased with dirty money.”

“This seizure should tell every corrupt Russian oligarch that they cannot hide — not even in the remotest part of the world,” she said.

Fearful of having their yachts seized, owners have sent them to a small number of locales still considered friendly — allowing the vessels to dock or hang around unbothered — including Dubai in the United Arab Emirates, Turkey and the Maldives, according to Spire Global Inc., a data and analytics firm that uses satellite technology to track maritime activity.

Still, it can be challenging to predict how countries might react to a Russian megayacht in their waters, such as in the case of the Amadea, or how governments might change their approach to sanctions with political pressure or a change in administration.

“As supply chains continue to shift and both economic and food security concerns rise to the level of national crises, the willingness to either take action against Russian vessels or allow them safe haven may both shift,” said Ian Ralby, chief executive of IR.Consilium, a maritime law and security consultancy.

With the war in Ukraine dragging on, more so-called neutral countries that haven’t imposed sanctions may be drafted to help with seizures. Geopolitical considerations often carry more weight than maritime law when it comes to seizures, said Elizabeth Mendenhall, an assistant professor of marine affairs and political science at the University of Rhode Island

“It’s more about the relationship between the US or the UK and the country they want to get help from,” she said. “They can use carrots and sticks related to other issues to get states to cooperate.”

Send them to Saldanha.

We need a few more artificial reefs – 2kg of demolition is all that is needed if can’t gain access to seacocks. The local divers can strip gold taps and shower fittings for the next few weeks and then harvest crayfish by December. Crayfish thrive on excrement!

Ukraine latest: fire at Russian base in Crimea raises questions

Ukraine latest: fire at Russian base in Crimea raises questions