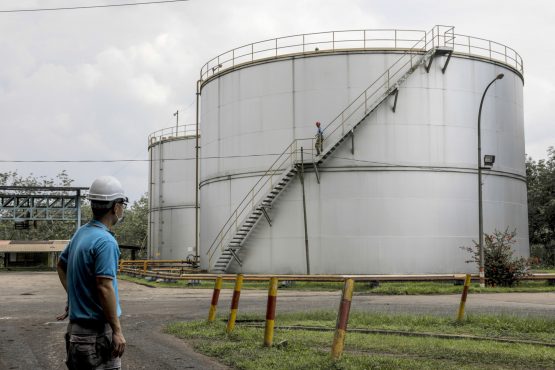 Brent oil declined from its highest level in seven years as a U.S. industry report pointed to an increase in crude stockpiles and China unleashed measures aimed at stabilizing its power supplies for the winter.

Futures in London fell below $85 a barrel amid a broader drop in raw materials including aluminum and copper. China is studying ways to intervene in the coal market to ensure reasonable prices, while the nation’s energy watchdog hosted a Tuesday meeting with refiners after oil prices soared.

The American Petroleum Institute reported crude inventories rose by 3.29 million barrels last week, according to people familiar, though the industry group reported another large decline at the key storage hub of Cushing, Oklahoma. Inventory draws there have seen the market structure of U.S. crude futures rocket higher, with the much-watched spread between the nearest two December contracts touching $10 a barrel this week, its strongest since 2013. Oil has rallied as an energy crunch — prompted by coal and natural gas shortages — coincided with rebounding demand from economies recovering from the pandemic. Wall Street has been steadily upping its estimates for oil prices in recent weeks, with Morgan Stanley the latest bank to do so, calling for $95 Brent in the first quarter of next year.

The market is currently seeing a “time for profit taking after the recent rally,” said Hans Van Cleef, senior energy economist at ABN Amro. “Also the sentiment in other energy markets has become a bit more relaxed, so this could also be a spill-over effect.”

The meeting between China’s National Energy Administration and oil refiners was meant to facilitate an exchange of views and help regulators stay abreast of market developments, said people with knowledge of the matter, adding that it ended without any policy decision.