Putin and Turkish President Recep Tayyip Erdogan will ‘100%’ discuss efforts to reach a deal on unblocking exports of millions of tons of Ukrainian grain from Black Sea ports, according to the Kremlin.
By Bloomberg News 19 Jul 2022  12:14 The leaders of Iran, Russia and Turkey are set to hold talks in Tehran on Tuesday, but the summit on enforcing a peace deal in Syria is likely to be overshadowed by President Vladimir Putin’s war in Ukraine.

Putin and Turkish President Recep Tayyip Erdogan will “100%” discuss efforts to reach a deal on unblocking exports of millions of tons of Ukrainian grain from Black Sea ports, according to the Kremlin. The US, meanwhile, has warned Iran is preparing to send Russia hundreds of drones, including ones capable of carrying weapons, amid significant losses by Putin’s military in Ukraine.

It is Putin’s first trip outside republics of the former Soviet Union since ordering the Feb. 24 invasion of Ukraine.

Russia struck Odesa region with seven missiles overnight, one of which was shot down by air defense, while six hit a village, according to the Ukrainian military’s southern command. Six people, including a child, were injured. Russian forces are trying to create conditions for resuming the offensive toward Slovyansk, Ukraine’s General Staff said in a statement. In addition, Russian forces shelled the Kramatorsk and Bakhmut axis, as well as areas in Chernihiv and Sumy regions. Ukrainian troops repelled several assaults in Donetsk region, according to the statement. Russia also fired at Nikopol and Kryvorizka district in the Dnipropetrovsk region, local governor Valentyn Reznichenko said on Telegram.

Russians were evenly divided over the need to hold peace talks or continue what the authorities call a “special military operation” in Ukraine, The Bell reported, citing a non-public June survey by state pollster VTsIOM.

The VTsIOM poll found 44% in favour of each option, with 12% declining to answer the question, The Bell said, citing an unidentified person close to the Kremlin who was familiar with the survey of 1,600 Russians conducted in late June. In another question, 57% said they favored continuing the war compared to 30% supporting ending it as soon as possible, The Bell said.

VTsIOM did not immediately respond to a request for comment.

The European Union is proposing a 500 million-euro ($508 million) investment tool to incentivize a minimum of three member states to buy weapons jointly, including artillery, air defense systems and anti-tank missiles.

“This initiative will make it possible to replenish part of the stocks following Europe’s united and supportive response by way of transfer of arms to Ukraine,” EU Internal Market Commissioner Thierry Breton said, adding the project would “boost our European industrial base.”

The measure would draw from the bloc’s budget for the next two years, and only European companies based in Europe will be able to benefit.

Ukraine appointed a new head of the anti-corruption prosecutors’ office after months of delay, fulfilling a requirement from the European Union and other international financial donors.

The former Soviet state, which is seeking closer integration with the West as it fights off Russia’s military invasion, has agreed to a demand by the bloc and the International Monetary Fund to demonstrate progress in fighting endemic corruption as a condition to receiving financial aid.

The European Commission is set to warn that, in the event of an average winter, a cut-off of gas shipments from Moscow would reduce the bloc’s GDP by between 0.6% and 1%.

It’s also planning a set of recommendations to member states — including reductions to heating and cooling use and some market-based measures — to offset the impact of a possible full disruption by Russia, its biggest source of imports. That measure will be voluntary, and governments will be told to report back in September with specific steps. The Commission will also give itself the right to force consumption cuts if needed later on. 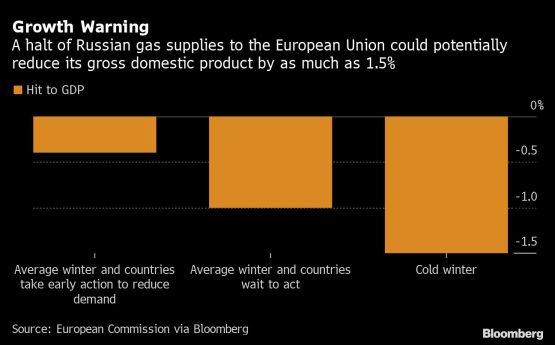 Ukraine’s military chief, Valeriy Zaluzhnyi, said Ukraine “has managed to stabilize the situation” in the country.

“It is complex, intense, but completely controlled,” Zaluzhnyi said on Facebook after speaking with General Mark Milley, chairman of the US Joint Chiefs of Staff. “An important factor contributing to our retention of defensive lines and positions is the timely arrival of M142 HIMARS, which deliver surgical strikes on enemy control posts, ammunition and fuel storage depots.”

Zaluzhnyi and Milley also discussed a meeting of the Ukraine Defense Contact Group, scheduled for Wednesday, where military needs will be discussed.

Olena Zelenska, the first lady of Ukraine and wife of President Volodymyr Zelenskiy, will accept a human rights award at the Victims of Communism Museum on Tuesday, according to a statement from the organization.

Zelenska, who met with US first lady Jill Biden during an unannounced visit to Ukraine in May, was invited to address the US Congress on Wednesday by Speaker Nancy Pelosi.