Russia’s president set his nuclear arsenal on a ‘special regime of high alert combat duty’ in the midst of his invasion of Ukraine.
By Marc Champion, Bloomberg 1 Mar 2022  08:09 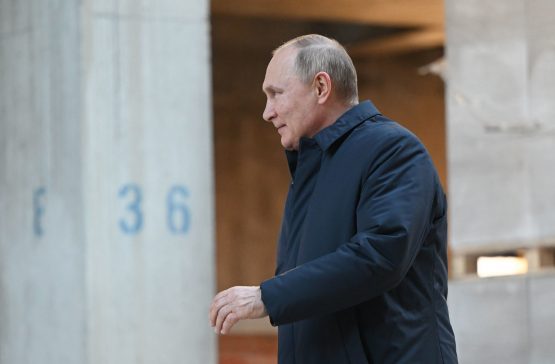 The world is having to ask a question that’s become familiar of late: is Vladimir Putin bluffing?

Russia’s president set his nuclear arsenal on a “special regime of high alert combat duty” in the midst of his invasion of Ukraine. Citing “aggressive statements” from the opposing nations, he gave the order live on national television on Sunday after the US and European Union dramatically stepped up their response to the attack.

Nuclear specialists are debating what exactly that would mean in practice because Russia does not publish its nuclear procedures. But the threat seemed clear after Putin’s warning — made as he ordered Ukraine’s invasion on February 24 — that any attempt to interfere would suffer “consequences you have never encountered in your history.”

“Unfortunately we need to take everything seriously given what we’re going through,” Clement Beaune, France’s secretary of state for European affairs, said on Monday, ahead of a security council meeting to be headed by President Emmanuel Macron. “But we need to take this with sangfroid and not react to all provocations, because there are certainly provocations organized by Russia, and yesterday’s speech is part of it.”

Five days into the assault on Ukraine, Russian troops have taken the port city of Berdyansk on the Sea of Azov and on Monday were attacking Mariupol. That puts them just 20 kilometers (12 miles) from the southernmost point of the so-called line of contact, where about 30 000 Ukrainian soldiers are dug into trenches as they hold off Russian forces pressing from the eastern separatist regions mired in conflict since 2014.

Russian forces remained held up in the north around Chernihiv near the border with Belarus, and around the country’s second largest city, Kharkiv, where the Ukrainian defense ministry reported intense shelling on Monday.

A US defense official said Russia still had not attained air dominance and that on the ground its military remained blocked about 40 kilometers from Kyiv. The official said 75% of the force Putin assembled around Ukraine has now been committed.

Meanwhile, the round of damaging economic sanctions against Russia, including on the central bank, and increase of arms transfers to Kyiv are taking effect. The ruble was down 22% in offshore trading and 16% in Moscow on Monday. The Bank of Russia imposed some capital controls, blocked foreigners from selling securities and more than doubled interest rates to 20%.

Russia retains overwhelming advantages in the field and its identification on Monday of a safe passage corridor from the capital raised fears a much larger assault may be imminent.

Still, the failure to achieve a quick victory against a determined resistance, together with an unexpectedly unified response from Europe and the US, has led to a growing narrative that Putin miscalculated and is lashing out.

The US on Sunday had described Putin’s nuclear decision as “escalatory.” UK Secretary of State for Defense Ben Wallace said the move was “about distracting the world” from Russia’s setbacks in Ukraine and that it made no change to Russia’s actual nuclear posture.

Those changes are usually signals designed for opposing defense and intelligence agencies to pick up, according to Jeffrey Lewis, director of the East Asia Nonproliferation Program at the Middlebury Institute for International Studies at Monterey, in California.

Small changes of alert happen routinely, Lewis said. What makes the Russian move unusual is that for the first time since the 1970s that signal was made on live TV for public consumption. The aim, he said, might be to spook Germany in particular into losing its resolve to confront Russia. German Chancellor Olaf Scholz ordered a sharp increase in defense spending just hours before Putin’s TV appearance.

“I think that helps reveal his motivation: He has made a series of misjudgments, about the Ukrainians and NATO, and the West more broadly in its unity,” Lewis said. “My guess is that his goal here is to divide Europe.”

Russia has just under 4 500 nuclear warheads, according to the Bulletin of Nuclear Scientists. Of those, 1 588 are deployed with the remainder held in reserve. Those warheads are carried by 336 land-based nuclear missile launchers, 11 nuclear armed submarines and 137 strategic nuclear aircraft, according to the International Institute for Strategic Studies, a London think tank.

The “special regime” the Russian leader talked about probably involves a switch from the peacetime sequence for a nuclear launch to a wartime sequence, according to Pavel Podvig, a Geneva-based specialist in Russia’s strategic forces and senior researcher at the United Nations Institute for Disarmament Research. That would reduce requirements for firing nuclear missiles to account for the possibility of a first strike.

Such a change would be harder for outsiders to see than the physical dispersal of additional nuclear-armed submarines and other measures that would come with a major change in alert status.

Following up on the threat wouldn’t necessarily mean firing a nuclear missile at a NATO country, Podvig said. Other possibilities include the use of a tactical battlefield nuclear weapon to end the war in Ukraine. One cause for concern is Russia’s strategic doctrine, which now appears to give wide scope for interpretation as to when it can be used in response to a conventional attack.

Equally, Putin could make a conventional challenge to the western security alliance backed by his nuclear threat, aimed at exposing the conditional nature of its Article 5 commitment to collective defense, according to Francois Heisbourg, a former official in the French foreign and defense ministries.

“We should be very concerned,” said Heisbourg, now adviser to the International Institute for Strategic Studies, a London security think tank. If Putin’s Ukraine gambit succeeds, he will have Russian forces not just on NATO’s shared frontiers with Russia and Belarus, but also Ukraine and potentially Moldova, he said.

“When was the last time analysts thought that Putin was bluffing? It was five days ago,” Heisbourg said. “ I don’t think he does bluffing. He telegraphs what he wants to do.”