The first in-person meeting in the Swiss Alps of the WEF in two years starts on Sunday after Covid-related interruptions.
By Andrea Dudik, Bloomberg 21 May 2022  08:55 The rich and powerful flocking to Davos this year won’t be forced for once to bear the icy winter wind, but the frostiness toward Russia, whose oligarchs have thrown some of the most famously glitzy parties at the World Economic Forum, will be palpable.

The first in-person meeting in the Swiss Alps of the WEF in two years starts on Sunday after Covid-related interruptions. Even this gathering was delayed from the usual late January schedule, meaning the snow is confined for once to the peaks.

The forum is different in other ways, too. Hanging over the panels, speeches and evening soirees is the reality of a war raging hundreds of miles to the east. President Vladimir Putin’s decision to invade Ukraine has put an abrupt end to decades of Russian presence and influence in Davos. There will likely be a more subdued tone as a whole, with the WEF attended by a clutch of Ukrainian officials seeking to keep global attention on their plight with the war in its third month. A keynote address (via video conference) will be given by President Volodymyr Zelenskiy.

It will be the first WEF in Switzerland since the fall of communism without a single Russian official or business leader. Russian companies have been nixed as strategic partners, a group of international businesses that play a prominent part in the calendar of events at a cost of 600,000 Swiss francs ($615,000) per year. Russia House —  renown for its chilled vodka — won’t even be set up.

That’s a far cry from the heyday of Moscow’s largess in Davos, when vodka and caviar-fueled parties sponsored by Russians were notorious for hosting large groups of young women without accreditation who claimed to be translators.

Putin’s war has seen unprecedented sanctions slapped on Russia from its political leadership to its oligarchs and biggest companies. International firms have pulled out of the country en masse. Trade and investment from the Europe and the U.S. with Russia has evaporated.

Sanctioned billionaires have been seeking safe haven in various pockets of the world, sending their massive yachts hopping from one port to the other to stay ahead of the law. All of a sudden anything “Russian” is seen as taboo.

The WEF is no exception.

At the last meeting in Davos in 2020, Russian tycoons were the third-best represented by billionaire count. But their future in Davos started to crumble just three days after Moscow attacked Ukraine, when WEF founder Klaus Schwab and President Borge Brende issued a statement condemning “the aggression by Russia against Ukraine, the attacks and atrocities.”

It’s a contrast to the treatment of Russia after Putin annexed Crimea from Ukraine in 2014. Even though Russia’s official presence at Davos dwindled, its billionaires and business leaders didn’t downgrade their profiles.

While some business relations were hit by sanctions, “that doesn’t affect personal relationships,” Kostin, a frequent Davos attendant, said at the time.

That year VTB threw a soiree at the ski resort’s InterContinental Hotel, where visitors were greeted by women in conical, gold-flecked outfits with strips of neon-LED lights wrapped around them. Caviar was served and party-goers serenaded by guitarist Al Di Meola, Russian crooner Leonid Agutin, plus Emir Kusturica & The No Smoking Orchestra.

While the party didn’t match the extravagance of events hosted by metals tycoon Oleg Deripaska over the years (one was styled after a Russian log house), it drew a strong crowd, one that included Schwab. While he usually shies away from private events, he said at the time he attended to show “our Russian friends that they are welcome in Davos” and that, “after all, Russia is a very important European country.”

For Russia’s post-communist history, the WEF has played an important role.

The conference cemented its reputation as an essential event for the Russian elite in 1996, when several tycoons agreed to pool their media resources and financial power to back Boris Yeltsin’s flagging re-election campaign in what became known as the “Davos Pact.”

The Russian delegation grew in size and visibility for nearly two decades, attracting heavyweights like then-President Dmitry Medvedev and, in 2009, Putin during his stint as prime minister. 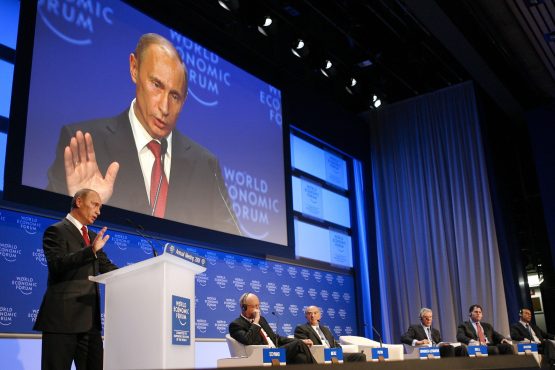 Vladimir Putin during day one of the World Economic Forum in Davos, 2009. Photographer: Adam. Berry/Bloomberg

In 2011, a Russian investment bank put on what it called a “spectacular ice show” performed by figure-skating stars.

In 2018 Russia threatened a boycott after the U.S. sanctioned businessmen Viktor Vekselberg, Deripaska and Kostin. The Kremlin said organizers backed off a plan to ban them from attending.

Putin addressed the stripped down Covid-era virtual forum last year, drawing parallels between current international tensions and the 1930s in the run-up to World War II. He used his speech to warn the world risked sliding into an “all against all” conflict.

Now his attack on Ukraine has brought conflict to the European Union’s borders, killed untold thousands and seen millions flee their homes.

Some Russian tycoons have toed the Kremlin’s line, while others have sought to separate themselves from the president’s warmongering.

Deripaska, whose connections to Putin have put him on sanctions lists, called the war “insanity” in late March. He warned fighting could continue for “several more years.”

That’s not going to be enough to get him invited anywhere like Davos again soon. Meanwhile multiple breakfasts, panels and evening events featuring Ukrainian officials are booked out.

As for Russia House, the plan is to rebrand it. The Victor Pinchuk Foundation, a philanthropic group named after its tycoon backer, intends to turn the site into a “Russia War Crimes House,” including an exhibition on war crimes allegedly committed by Russian troops in Ukraine.

I see no one questioning Switzerland’s neutrality and how they are aiding and abetting wrongdoing through holding Oligarchic money, be they Russian, African or other.