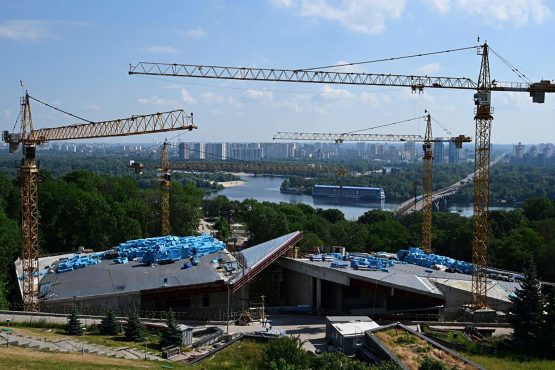 President Vladimir Putin’s forces closed in on their goal of capturing Ukraine’s eastern region of Luhansk as Ukrainian troops withdrew from the city of Lysychansk, the last Kyiv-controlled redoubt in the area.

The Russian leader made a public display of the seizure, telling his defense minister, Sergei Shoigu, in televised remarks to give soldiers who had captured the city a rest and rely on other units to continue offensive operations. The Ukrainian military said holding Lysychansk would have led to “fatal consequences” against Russia’s advantage in artillery, aviation, ammunition and personnel.

Ukraine plans to present a blueprint for reconstruction following Russia’s invasion, which has destroyed cities, displaced millions and devastated the economy. The plan, which will be unveiled at a two-day conference in the Swiss city of Lugano, includes investments in infrastructure, climate and digital. Separately, European Commission President Ursula von der Leyen will present a platform to coordinate European Union donations to mobilise what could amount to more than 500 billion euros ($522 billion).

With Lysychansk under its control, Russia is switching its focus further west into Donetsk, intensifying shelling of the region, according to Ukrainian officials. Moscow’s forces also hit residential areas, leaving nine civilians killed and 25 wounded there over the last 24 hours. Russia is attempting to blunt a counteroffensive by Kyiv’s forces in the Kharkiv region in the northeast as well as the Kherson and Mykolayiv regions in the south, the Ukrainian military said.

The Russian leader congratulated Defense Minister Sergei Shoigu after Russian forces took control of a Lysychansk. Speaking in televised comments, Putin told Shoigu to give the units involved in the latest offensive time off to rest and to shift responsibility for continuing operations to other forces.

Shoigu had reported to Putin on Sunday that Russian forces had taken control of the city, a fiercely contested industrial center that was one of the last major targets outside Moscow’s control in Luhansk.

The Ukrainian military said the nation’s jurisdiction over Snake Island, a strategically significant outpost off the Black Sea coast, had been recovered. Natalia Humeniuk, a spokeswoman for the military’s southern command, said in a video briefing that the national flag had been planted on the territory.

Russian forces took control of the island in the western Black Sea early in the war but struggled to hold it as Kyiv ordered a series of missile and artillery attacks. Russia confirmed last week that its troops had left the island.

The US ambassador to China called on the Foreign Ministry in Beijing to stop spreading Russia’s “lies,” in an unusually direct and public rebuke by the top American diplomat in the country.

Ambassador Nicholas Burns made the “request” in response to a question at a government-backed forum Monday about what China could do to resolve the crisis over Russia’s invasion of Ukraine. Burns reiterated President Joe Biden’s call for Beijing to avoid helping Moscow carry out the war, before pivoting to a simmering point of contention between the world’s two largest economies.

The European Investment Bank will propose a new 20 billion-euro fund to help finance the reconstruction of Ukraine when donors gather in Lugano.

The fund would aim to mobilize as much as 100 billion euros of investment from other sources over the next 10 years and could potentially be scaled up, according to people familiar with the matter.

That’s just a fraction of what Ukraine will need when the war is over. The EIB has estimated that the costs of rebuilding the country could surpass 1 trillion dollars and the has EU has acknowledged that it will cover the bulk of the costs.

A Russian Navy vessel joined a warship from China in sailing near islands in the East China Sea early Monday, Japanese public broadcaster NHK said citing government officials. Japan earlier expressed “grave concerns” to Beijing over one of its warships on Monday passing near the uninhabited islands — known as Senkaku in Japan and Diaoyu in China — that are at the center of a territorial dispute between Japan and China.

In May, Russian and Chinese warplanes conducted a joint drill near the airspace of US allies Japan and South Korea, in a show of power by the long-time partners that came as President Biden wound down an Asian trip to seek support over Putin’s invasion of Ukraine.

Australia will prohibit imports of Russian gold, joining partners including Canada, Japan, the UK and the US in a measure that will reduce Russia’s ability to fund its war, Prime Minister Anthony Albanese’s office said in a statement following his visit to Kyiv on Sunday.

Plans for the four Group of Seven countries to ban imports of new Russian gold were announced before last week’s summit of G-7 leaders in Germany. Australia isn’t part of the group.