Russian missiles struck an apartment building and a recreation center near the Black Sea port of Odesa early Friday.
By Bloomberg News 1 Jul 2022  17:02 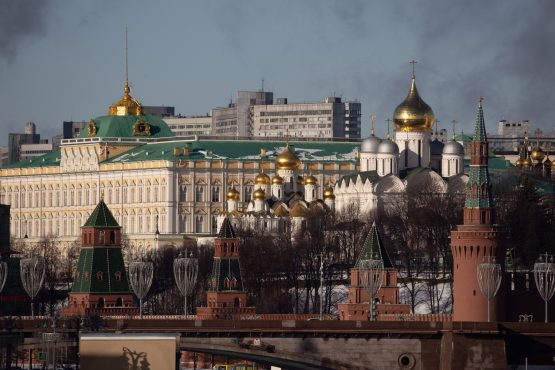 The European Union will propose 1 billion euros in short-term financial relief for Kyiv’s urgent cash needs. Russia is easing labour rules in a bid to boost arms production in the face of Western sanctions.

Russian missiles struck an apartment building and a recreation center near the Black Sea port of Odesa early Friday, killing at least 20 people and injuring dozens more after Moscow’s forces withdrew from a strategic island about 100 miles to the south.

Ukrainian President Volodymyr Zelenskiy used his nightly address to praise the departure of Russian forces from Snake Island. Moscow painted it as a gesture toward easing grain shipments in the southern waterway, but Kyiv said they were forced out Ukrainian shelling.

As the largest-scale military operation in Europe since World War II continues in its fifth month, Russia kept up its push to capture Ukraine’s Donetsk and Luhansk regions. Kremlin forces are closing in on Lysychansk, Ukraine’s last major foothold in Luhansk. Russian missiles also struck the northeastern city of Kharkiv and Mykolayiv on the Black Sea overnight. Near Odesa, a Russian missile hit a nine-storey apartment building at 1 a.m. killing at least 16 people, said Serhiy Bratchuk, the military spokesman for the region. Another missile killed at least four people at a recreation center early Friday. More than 40 people were wounded. There was no comment from Russia on the deaths.

The European Union will propose 1 billion-euros ($1.04 billion) in short-term financial relief for Ukraine to address urgent cash needs, as Germany continues to hold up talks on a larger package, said people familiar with the matter.

EU officials prepared the option on after the European Commission, the bloc’s executive arm, failed to secure Berlin’s blessing for a package that would entail 8.8 billion euros in loans.

Russia’s government would ease labor and other regulations to allow defense companies to repair weapons and produce goods for the military under a new draft law submitted to parliament.

Citing the “short-term increased need to repair weapons and military equipment and ensure supplies” amid sanctions imposed by the US and its allies, the document would give the government the power to impose “special measures,” including night shifts and overtime work, if needed.

The war effort “requires the temporary concentration of efforts in certain sectors of the economy,” the document says. Officials have said Moscow has adequate weapons supplies, but Western governments have claimed that supplies of some are running short as the campaign drags on.

The global wheat market, with values pushed higher by Russia’s invasion of key producer and exporter Ukraine, will soon be confronted by harvests rolling in across the Northern Hemisphere.

Attention now turns to how the war will affect the new season’s shipments, and how well other countries can plug gaps in supplies. 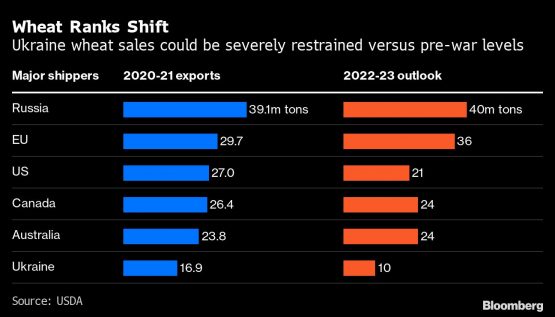 Russia “remains a reliable producer and supplier of grain, fertilizers and energy,” including to India, Putin told Prime Minister Narendra Modi on Friday, according to a Kremlin readout.

On a phone call the pair “exchanged ideas on how bilateral trade in agricultural goods, fertilizers and pharma products could be encouraged further,” an Indian press statement said. They also discussed decisions taken during Putin’s visit to India in December. India has sharply boosted purchases of fuel from Russia since the invasion of Ukraine began, emerging as a key lifeline for Moscow.

Russia’s envoy to Bulgaria said she’ll raise the issue of shutting the mission in the Balkan country with the Russian leadership after the government in Sofia refused to withdraw a decision to expel 70 diplomats and embassy officials.

Euro-area inflation surged to a fresh record in June, rising a higher than expected 8.6% year on year.

The European Central Bank blames Europe’s woes on a post-lockdown spike in energy costs that snowballed when Russia attacked Ukraine. While that relentless advance in prices has broadened, a gauge of underlying inflation, excluding energy and food, inched down in June. The European Union is working on new sanctions to target Russian gold, matching a move by the Group of Seven nations aimed at further choking off Moscow’s revenue sources, according to people familiar with the matter.

Russia is the second largest gold mining country in the world, and its gold exports were estimated to be worth £12.6 billion in 2021. When the UK, the US, Japan and Canada unveiled their plans to ban new gold imports from Russia earlier this week, Britain said the measure would have a “huge impact” on Vladimir Putin’s ability to fund his armed forces and oligarchs’ attempts to avoid the impact of financial sanctions by buying bullion.

The government is working to secure the remaining permits from the state’s nuclear authority, which would allow the construction phase to begin, Szijjarto after meeting Rosatom CEO Alexey Likhachev in Istanbul.

Rosatom is providing the necessary documentation for the paperwork to be cleared. The two new blocks should be online by 2030, expanding the plant’s capacity.

Japan’s Government Pension Investment Fund said Friday that it’s been selling Russian assets since March following the invasion of Ukraine, marking down some values to almost zero in the process.

The world’s biggest pension fund has substantially reduced holdings of Russian bonds, which can still be traded over-the-counter. The fund has been largely stuck with the country’s stocks, as foreign investors face trading restrictions, its chief investment officer said.

The European Commission approved a five billion euro French program to support energy-intensive companies hit by rising bills in the wake of Russia’s invasion of Ukraine.

The aid will take the form of direct grants for additional costs due to severe increases in natural gas and electricity prices, the commission said in an emailed statement.

Margrethe Vestager, the EU’s competition commissioner, said the aid “will enable France to mitigate the impact of the rising input costs on those companies, which play a key role for the French economy.”

Citigroup is in discussions with Expobank and Reso-Garantia for a potential sale of its Russian operations, the FT reported, citing people familiar with the matter.

Rosbank has also expressed interest in buying Citi’s assets, the Financial Times said. Citi declined to comment to the London-based newspaper, while Expobank, Rosbank and Reso-Garantia didn’t respond to requests for comment.

Ukraine is seeking to reboot its agricultural land market s, reopening sale registers disabled for about three months because of Russia’s invasion.

More than 51,000 land sale deals have collapsed since the Feb. 24 invasion, partly due to fields being contaminated with land mines, Deputy Agriculture Minister Markiian Dmytrasevych said in a video briefing.

The weighted average price of 1 hectare of agricultural land is 37,000 hryvnia or about $1,300 according to the official central bank rate.

Russia’s economy is shrinking under sanctions, but the data show a gradual, uneven contraction in GDP — not a sharp crash. Bloomberg Economics’ latest nowcast suggests output is down about 3% since the start of Vladimir Putin’s war against Ukraine, with signs of a small rebound in June. Uncertainty remains high, and BE expects a further pullback in activity as sanctions ripple through supply chains. 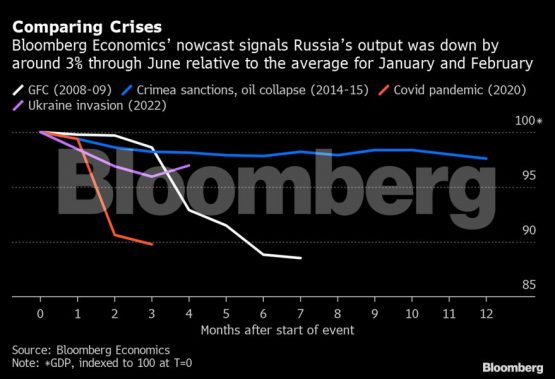 Budapest will still oppose any sanctions on natural gas imports, Orban told public radio in his weekly interview on Friday. However, it can’t constantly “go against the flow of traffic” in the bloc on non-energy issues.

Hungary is Russia’s closest ally in the EU and Orban has had personal disputes with Zelenskiy. The Hungarian premier has also managed to get EU sanctions packages watered down. The EU has retained clout by threatening to withhold billions of euros in aid from Hungary over Orban’s domestic policies.

Putin offered to have Russian Railways invest in Indonesia’s new capital, in a sign of warming ties with Southeast Asia’s biggest economy as the US and its allies seek to isolate Moscow.

Putin said Moscow could take part in President Joko Widodo’s plan to move Indonesia’s capital to the island of Kalimantan from Jakarta, according to a statement by the Russian Embassy in the country. He made the comments during Jokowi’s visit to Moscow on Thursday, it said.

Indonesia has come under pressure by the US and other countries to prevent Putin from joining the Group of 20 summit, which is set to take place in Bali. The Russian leader made no comment on whether he’ll attend in person.

The decree to transfer rights to the Sakhalin-2 natural gas project cites threats to Russia’s national interests and economic security, according to a statement dated June 30, issued by the Kremlin and signed by Putin. Stakeholders have one month to say whether they’ll take a holding in the new company, and those who opt out may not be fully compensated, the statement said.

The move could prove complicated for Shell, which holds a 27.5% stake in the liquefied natural gas facility in Russia’s far east. Japanese trading houses Mitsubishi Corp. and Mitsui & Co., which fell in early trading Friday on the news, own a combined 22.5% of the project, and a majority of the gas produced there supplies Japan.

The Kremlin said there was no threat to LNG supplies from the Sakhalin-2 project. 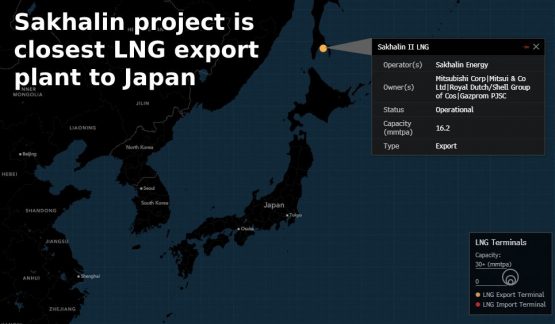 Zelenskiy said the departure of Russian forces from Snake Island “significantly changes” the situation in the Black Sea, while urging caution about how much it will really affect the course of the war.

“It does not guarantee safety yet, it does not yet guarantee that the enemy will not return,” Zelenskiy said in his nightly address to the nation. “But it already limits the actions of the occupiers significantly. Step by step, we will drive them out of our sea, our land and our sky.”

At the same time, Zelenskiy said the fighting in the Donbas region “remains the toughest” in the conflict, adding that Ukraine is outgunned by Russian forces.

It is well past time for Ukraine to destroy a dozen pipeline spots in the Russian oil and gas pipelines that cross Ukraine. cut off the cashflow that
funds the cowardly missile attacks. Hungary and Italy are casualties – both are dubious democracies anyway