And may face additional constraints as it looks for resources to defend the rouble and fund its war effort.
By Eric Martin and Saleha Mohsin, Bloomberg 3 Mar 2022  06:55 Russia’s narrow path for turning its $24 billion in International Monetary Fund reserves into cash hinges on Chinese authorities and may face additional constraints as it looks for resources to defend the rouble and fund its war effort.

All members of the IMF receive an allocation of reserve assets, known as special drawing rights, that’s roughly proportional to the size of a country’s economy. Those assets can be exchanged for five currencies deemed “freely usable” by the IMF: dollars, euros, pounds, yen and, as of 2016, yuan.

Severe sanctions imposed on Russia by the US, UK, European Union and Japan have essentially shut the door to the first four currencies. That leaves China, which hasn’t joined in the penalties, as an avenue for Russia to obtain hard currency. 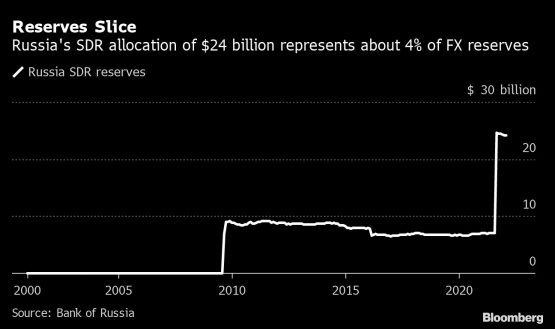 Even China may be unwilling to help Russia circumvent sanctions put in place by its largest global peers, said David Andrews, who spent almost a decade at the IMF, including as deputy director of one of the departments that deals with the reserve assets.

“They’re basically stuck with their SDRs, unless China is prepared to come in,” said Andrews, now a consultant with the Center for Global Development, a Washington-based think tank. “I can’t really see the incentive for China to do it. It’s one thing to not be taking part in sanctions. It’s another thing to overtly break them.”

If the People’s Bank of China agrees to any request by Russia to exchange its SDR assets for yuan, such a transaction would have “limited value in protecting the rouble’s value in global markets,” said Eswar Prasad, a former IMF official and China analyst who’s a Cornell University professor of international trade policy.

That’s because the yuan isn’t as easily bought or sold as tenders from the advanced economies in the IMF’s “freely usable” basket, making it less useful for trade, he said.

“It would be easier and more straightforward for the Russian central bank to activate its bilateral swap line with the PBOC and swap roubles for yuan,” Prasad said, referring to the agreement that the two nations have to lend to each other’s central banks.

The war is testing Chinese President Xi Jinping’s commitment last month to a “no-limits” relationship with Putin, as the US and its allies pile on sanctions and press Beijing to take a stand against military aggression. In recent days, Xi has urged Putin to pursue negotiations and China’s United Nations ambassador abstained from, rather than opposing, a Security Council resolution condemning the attack.

China is “extremely concerned” about the harm to civilians in Ukraine, Foreign Minister Wang Yi told his Ukrainian counterpart in a call this week, in the latest indication of Beijing’s desire to prevent the war’s further escalation.

The IMF assets amount to about 4% of Russia’s $643 billion in reserves. President Joe Biden said during his State of the Union address Tuesday night that Russian President Vladimir Putin’s “war fund” of those total reserves is now “worthless,” though officials in the US and Europe say that sanctions freeze roughly half of the stockpile.

The US is committed to taking all measures to prevent Russia from benefiting from its IMF reserve holdings, a Treasury official said. If the Russian central bank were able to acquire any of the four other major currencies as a result of an SDR transaction, those funds would be effectively frozen due to sanctions, the official said.

Russia’s position now is similar to the one that Iran has faced due to sanctions over its nuclear program, and the Biden administration has seen no indication that Iran has been able to exchange its reserve assets for yuan from China, according to a person familiar with the situation, who asked not to be identified without permission to speak publicly.

The Treasury Department declined to comment on whether Iran has exchanged SDRs with China.

The IMF press office said that the institution doesn’t decide how individual countries use SDRs because transactions involving the reserve assets are arranged between member nations. A fund spokesman declined to comment when asked about willingness among other countries to buy Russia’s reserves.

The IMF-issued reserves typically sit on the balance sheet of a central bank and add to their reserves unless authorities find partners to exchange them for usable currency. Russia received $17.6 billion last year as a result of the IMF’s creation of $650 billion for its 190 member nations to fight the global pandemic.

A group of 41 Republican representatives and senators in the US Congress on Monday wrote to Treasury Secretary Janet Yellen, urging the Biden administration to advocate that IMF member countries formally agree to not facilitate any exchange with Russia’s SDRs, and oppose any additional allocations that would boost the country’s reserves.

GOP lawmakers including Arkansas Representative French Hill opposed the creation of the IMF reserves last year because fund rules required them to be distributed in proportion to each country’s share in the institution.

That meant handing reserves equivalent to billions of dollars to US adversaries including Iran, Syria and Venezuela, resources that critics warned would be used to fund oppressive regimes and human-rights abuses. But Venezuela also has faced constraints using the assets since there isn’t broad agreement among IMF members on recognising the nation’s government.