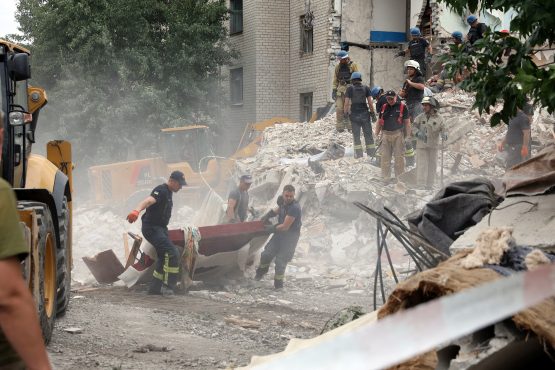 A US Treasury official and Ukraine’s finance minister discussed the plan to put a price cap on Russian oil being explored by several of the world’s leading economies, which is aimed at preventing another global price spike and limiting the Kremlin’s ability to finance its war.

The United Nations secretary-general cited progress after talks with Ukraine and Russia in Istanbul on ways to resume grain exports from Black Sea ports blocked by Russian troops in the effort to ease pressure on global food markets.

At least 20 people, including three children, were reported dead and dozens wounded after a Russian strike on Vinnytsia, about 250 kilometers (155 miles) southwest of Kyiv, Governor Serhiy Borzov said on Telegram. Several Kalibr missiles — including two intercepted by Ukraine’s air defense — were said to be launched in late morning from the Black Sea; residential buildings and a medical center were among the buildings destroyed, along with dozens of cars. Russian forces continued shelling the Slovyansk area, according to Ukraine General Staff statement. Russia also struck the Dnipro region further west overnight, the regional governor, Valentyn Reznichenko, said on Telegram.

Three russian missiles hit a business centre in the city of Vinnytsia. Casualties among civilians are reported.
Ukraine has already suffered almost 3,000 missile strikes. The supply of sufficient amount of the Western anti-missile systems is long overdue. pic.twitter.com/JghxLuewvO

European Union Economy Commissioner Paolo Gentiloni warned that the risk of a full shutdown of gas from Russia “has become more than just a hypothetical scenario for which we need to prepare.” Speaking in Brussels on Thursday, he said that “a storm is possible — but we are not there at the moment.”

Ukraine’s grain exports are running 40% below last year’s pace as the 2022-23 season kicks off, the latest figures from its agriculture ministry show. The downturns highlights the logistical constraints from the war, which has blocked the major Black Sea ports that typically account for the bulk of its crop sales abroad.

There have been some signs of improvement recently, with Ukraine accessing an additional route tapping ports on the Danube River and Romania reviving a railway link sooner than expected. Negotiations this week in Turkey with Russia and the United Nations also made progress, Ukrainian President Volodymyr Zelenskiy said. Still, a deal has yet to be reached.

Shares in Ukrainian agriculture producers Kernel Holding and Astarta soared for the third day, as traders were encouraged by signals of progress in negotiations over unblocking grain exports by Russia. Kernel jumped 15% in Warsaw to 27.30 zloty per share to the highest since June 9. Astarta rose 12% to 27 zloty per share, the highest since June 7. An impasse on how to characterize the economic fallout from Russia’s invasion is hanging over prospects for an agreement on it and related issues as finance chiefs gather for the Group of 20 meetings in Bali.

Disagreements on the causes and ways to alleviate supply-chain and inflation crises stemming from the war are set to complicate efforts to settle on a communique at the end of the gathering on Saturday, according to people familiar with the matter.

US Deputy Treasury Secretary Wally Adeyemo and Ukrainian Finance Minister Serhiy Marchenko discussed progress made toward implementing a price cap on Russian oil, according to a White House readout.

The price cap would restrict revenue for Russia’s military while dampening the impact of the war on global oil and energy prices. The aim is an arrangement to ban, by the end of this year, the insurance and transport services needed to ship Russian crude and petroleum products unless the oil is purchased below an agreed price.

Jessica Lewis, US assistant secretary of state for political-military affairs, said Ukraine’s use of US-provided Javelin anti-tank systems and Stinger anti-aircraft weapons — considered asymmetric because they can help a smaller force battle a stronger opponent — hold lessons for the defense of Taiwan, which China has threatened with invasion.

“One of the things that everyone is thinking about when it comes to Taiwan, and I think a lesson learned from this war, is that asymmetric works,” she said at a Center for International and Strategic Studies event on US security assistance to Ukraine.