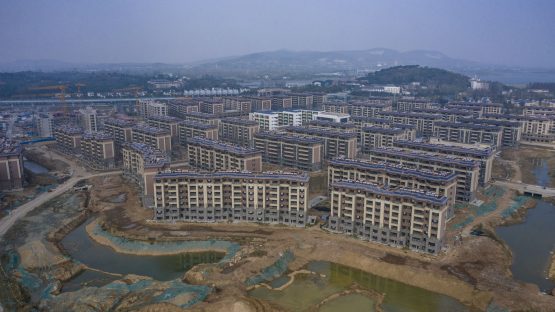 China’s stressed developers face nearly $1.3 billion of bond payments in December, including a unit of China Evergrande Group, which will see a grace period end in the middle of next month. Fantasia Holdings Group Co. meanwhile won approval to delay early redemption of a local bond by two years.

Evergrande plunged 8.8% in Hong Kong Monday, extending the biggest two-day drop in more than four months, after its billionaire chairman sold shares last week at a discount. The developer’s 8.75% note maturing in 2025 was indicated little changed at 23.9 cents on the dollar. A gauge of real estate stocks slipped 1.6%, extending losses this year to 31%.

Ronshine China said it has remitted $140 million into the designated bond-repayment account of Citicorp International for the payment of outstanding senior notes due Friday, according to a Hong Kong stock exchange filing.

The dollar bond has an outstanding amount of $136.6 million, plus $3.58 million in interest.

China’s economy is facing multiple risks heading into next year, with a property slump lingering and a new virus variant possibly upending the global recovery.

Economists expect Chinese authorities to boost fiscal and monetary support next year after a relatively restrained approach for most of this year. The People’s Bank of China last week signaled an easing bias, while the State Council, China’s cabinet, urged local governments to speed up spending. Fantasia received investor approval to delay early redemption of a 7.8%, 730 million yuan local bond by two years to November 29, 2023, according to a company filing to the Shanghai stock exchange. The early repayment of principal demanded by bondholders was originally due on Monday, according to a November 25 filing.

China Aoyuan will extend repayment on its 5.6% onshore private bond due December 3, Jiemian.com reported, without citing anyone. Aoyuan didn’t immediately respond for comment when reached by Bloomberg.

Trading of shares in Fantasia and its unit Colour Life Services Group Co. was halted pending inside information announcements, according to separate filings. On Friday, Fantasia said a winding-up petition was filed against its major subsidiary Fantasia Investment Holdings Co. on November 24 in connection with an alleged outstanding loan of $149 million, according to a filing to the Hong Kong exchange.

China’s property developers face nearly $1.3 billion of bond payments in December, after a month in which investor sentiment toward the property sector showed signs of stabilizing despite fresh signs of liquidity pressure.

The total payments were $2 billion in November, and there have been no defaults reported according to Bloomberg-compiled data as of Friday, after multiple instances in October. Still, investor scrutiny persists regarding principal and interest payments as a cash crunch engulfs the real estate industry. Center stage is Evergrande and Kaisa, two of the country’s biggest dollar-bond issuers. An Evergrande unit and Kaisa have grace periods ending by mid-December on a combined $170.9 million of coupons. 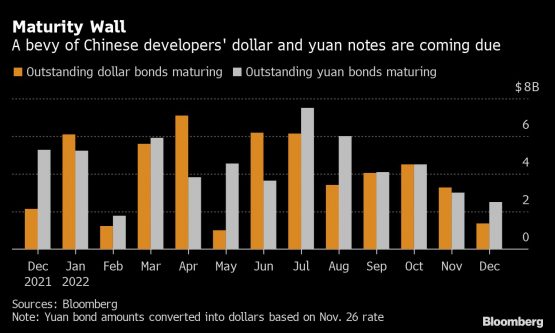 China Overseas Land’s subsidiaries agreed to sell a 30% stake in Kai Tak project for about HK$1.35 billion ($173 million), according to a Hong Kong Exchange filing. The buyer is Haijian I Investment, which is wholly owned by Haijian Fund LP.