After the company said it may not have enough cash to meet debt payment obligations next month, raising concerns about other stressed developers.
By Patrick Winters, Bloomberg 21 Feb 2022  08:14 Zhenro Properties Group Ltd. shares fell as much as 17% in Hong Kong after the company said it may not have enough cash to meet debt payment obligations next month, raising concerns about other stressed developers.

The builder’s sudden and mysterious slide into distress may undermine efforts by the Chinese government to stem financial contagion in a sector that accounts for about a quarter of the country’s economic output. A Bloomberg Intelligence gauge of real estate developers fell as much as 2.8%, with Sunac China Holdings Ltd. slumping 11%.

DaFa Properties Group Ltd. said a winding-up petition was filed against the company and its subsidiary in relation to certain outstanding senior notes in the principal amount of $15 million, according to a filing to HKEX. The outstanding amount includes accrued and unpaid interest, and the company said it will oppose the petition vigorously.

Only seven weeks ago, Zhenro looked like a rare beacon of strength in a Chinese real estate industry reeling from an unprecedented stretch of defaults.

The company had just announced plans to redeem a perpetual bond and boasted that one of its units had secured a 9.14 billion yuan ($1.44 billion) credit line from state-owned Bank of China Ltd. Zhenro’s short-dated bonds were trading near 80 cents on the dollar, compared with 17 cents for embattled property giant Evergrande.

Now Zhenro has become the latest developer to warn it may not meet its obligations, an about-face that’s extreme even by the standards of an industry where negative surprises have multiplied over the past year. 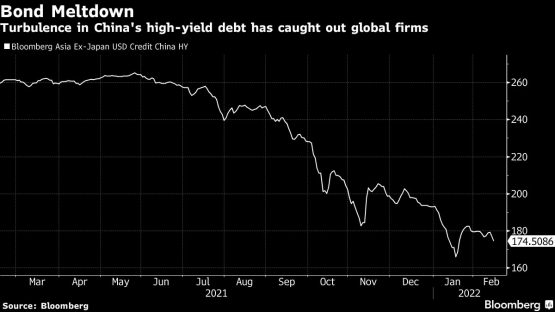 The returns are all the more surprising as turbulence in China’s real estate sector caught out global asset managers including arms of Prudential Plc and UBS Group AG. And as firms like T. Rowe Price Group Inc., Allianz Global Investors and Goldman Sachs Asset Management seek to tap opportunities from the stressed sector, top performing fixed-income hedge funds in the nation are now turning more cautious because they see risks rising further.