Solar pushes aside coal as the cheapest fuel for power, IEA says

Solar photovoltaics are now cheaper than plants fired by coal and natural gas in most nations.
By William Mathis and Jeremy Hodges, Bloomberg 18 Oct 2020  09:33 Renewables are set to overtake coal this decade as the world’s favorite fuel to generate electricity, the International Energy Agency says.

Solar photovoltaics are now cheaper than plants fired by coal and natural gas in most nations, the Paris-based researchers concludes in its annual report on global energy trends. Those cheaper costs along with government efforts to slash climate-damaging emissions will increasingly push coal off the grid and give renewables 80% of the market for new power generation by 2030, the IEA says. 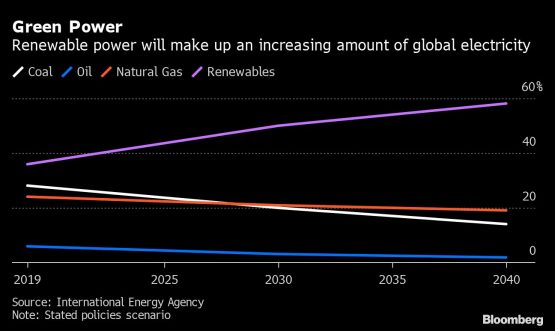 The findings mark a profound shift away from fossil fuels in the world’s energy supply at a time when governments everywhere are looking for ways to rein in the greenhouse gases blamed for global warming. While hydro-electric plants will continue to be the biggest source of renewable power, solar is catching up quickly because the cost of manufacturing and installing panels has come down so much.

“I see solar becoming the new king of the world’s electricity markets,” Fatih Birol, executive director of the IEA, says in a statement with the report on Tuesday. “Based on today’s policy settings, it’s on track to set new records for deployment every year after 2022.” The IEA’s projections are based on what it calls the Stated Policies Scenario, which assumes Covid-19 is gradually brought under control next year and the global economy returns to levels seen before the outbreak. The scenario includes currently announced policy intentions and targets that the IEA considers to be backed up by detailed measures for the plans to be enacted.

It also anticipates natural gas demand slowly easing in developed nations, especially Europe, and coal dropping everywhere. About 275 gigawatts of coal-fired capacity worldwide, 13% of the 2019 total, will be shut off by 2025, mostly in the US and European Union. That will more than offset increases in coal demand in developing economies in Asia.

Coal’s share of the global power supply is set to fall to 28% in 2030 from 37% in 2019. By 2040, the fuel that once was a staple of utilities will fall below 20% for the first time since the industrial revolution, the IEA concludes. That decline could be even sharper if governments pick up the pace on decarbonisation. The assumptions require a massive investment in power grids, which need upgrades to absorb supply from more diverse sources that only work when the sun shines or the wind blows.

Investment to modernise, expand and digitise the grid will need to reach $460 billion in 2030, two thirds more than the cost last year. That spending will help roll out 2 million kilometres of new transmission lines and 14 million kilometres of distribution networks, 80% more than was added in the last 10 years, according to the IEA.

The human brain is supposed to be the most sophisticated 1.3kg of meat in the universe and yet it has taken us a few thousand years to work out that we could use the heat from that big red thing in the sky that comes up every day (unless you live in the Polar Circle) and instead of digging thousands of feet down into the earth, we could actually use the energy from the big red thingy in the sky.

Sigh … there may yet be hope for the human species.

The problem not mentioned is that solar cannot directly replace coal. You need energy storage too with solar (batteries or pump storage) or gas turbines on stand by.

When you add the cost of pump storage / batteries / gas turbines to the solar cost then coal is still much cheaper.

We apparently want the lights on all the time. Not just when sun is shining.

Eventually, renewable energy systems will be more financially Cheaper than fossil fuel power generation systems. However, I believe it will be a very long time before we are 100% off fossil fuels.

Agreed, but batteries have become exponentially more efficient in the last decade and will improve more.

Battery technology is improving substantially. I can tell you this simply from the point of view of the humble torch, which has changed exponentially in the last decade, both in terms of the LED bulbs now being used and the lithium batteries powering them.

Have a look at what Tesla is up to for a better idea of how batteries are improving.

The problem (for solar) unfortunately, being the cheaper, cleaner future alternative, is that (in SA) coal has more scope to pay bribes to our politically connected elite.

So we’ll continue to ‘pay the price’ for coal, sorry I mean the ‘cost of corruption’.

100% correct … Eskom pays execessively to transport coal from A to B …. all rigged tenders.

As for Gwede Mantasha…. he has his eyes on the 1 Trillion Rand Nuclear plant….

I had a meeting with the Minister of Minerals and Energy Mr Gwede Mantashe on 6 March 2020 informing him of Renewable Energy HY-DROME. WE can give S.A 40 000 MW by Dec. 2021, GUARENTEE no more Load shedding with 100% Renewable Energy from the Sea but President Cyril Ramaphosa is being kept in the dark by his own chief of Staff Roshene Singh and Minister of Energy Minister Mantashe to move S.A completely away from Coal. The HY-DROME IS the ONLY Solution that will take S.A forward in the Energy World. With Renewable Energy HY-DROME S.A and the WORLD has no need for Wind, Solar, HYDRO, MINISUBS, Nuclear or Fossil FUELS. But Government restrains the President to know of THIS. and I have PROOF. WE NEED HELP FROM CITIZENS AND THE PRESS TO PUSH THIS THROUGH AND STOP Mantashe Nuclear ideas.