The biggest problem the fund faces is figuring out how much pollution it’s responsible for in the first place.
By Akshat Rathi and Saijel Kishan, Bloomberg 27 Apr 2022  00:01 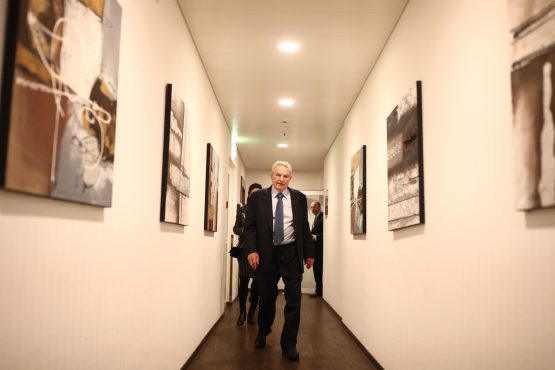 Investors managing $130 trillion have committed to reach net-zero emissions by 2050. But lots of questions remain: How should financiers count their share of responsibility for the warming impact of the companies they support? Is it better to urge businesses to take stronger climate action, or to stop funding them entirely?

That matters because finance behemoths like BlackRock Inc. can have as much emissions on their books as the auto giant Volkswagen AG. The climate plan from billionaire George Soros’s investing firm Soros Fund Management — among the most detailed and transparent roadmaps to have emerged from the industry yet — illustrates just how complicated those issues are.

SFM manages $28 billion and aims for its investments to reach net zero by 2040, according to a report published April 14 on its website. The fund mainly oversees money for the Open Society Foundations, a network that’s already given thousands of grants to groups promoting democracy and human rights.

Hilary Irby, the New York-based fund’s head of impact strategy, is well aware that big investors have been criticized for setting vague climate promises that aren’t backed up by enough detail to hold them accountable. That’s why SFM set its net-zero target in 2019, but only quietly went public earlier this month with the little-noticed post on its new website.

The company needed time to make sure it was properly evaluating the emissions it finances and how it could go about cutting them, Irby said. “We wanted to be able to speak with results, rather than just say, ‘this is what we’re going to do,’” she said.

The biggest problem the fund faces is figuring out how much pollution it’s responsible for in the first place. Only half of SFM’s assets are made up of companies that disclose emissions data (and that itself is patchy) or whose emissions data can be easily modeled. The other half is made up of financial assets, which spans everything from currencies to sovereign bonds, and there aren’t yet standard methodologies to calculate emissions for some of them.

So SFM had to create its own models to estimate emissions for all its assets in order to set targets to cut them. Those goals cover not just direct emissions from the businesses it invests in and carbon generated by their energy suppliers – known as Scope 1 and 2 – but also Scope 3 pollution, which is caused by customers and suppliers. That last category often takes up the biggest share of a company’s total emissions and can be harder to reduce.

Scope 3 emissions data aren’t reliable, said Irby, though she expects that to improve in the next few years. SFM knows that errors are inevitable. “We are giving ourselves the permission to make mistakes because we are dealing with a lot of unknowns,” said Irby.

That means building in buffers. Before getting to net zero in 2040, SFM aims to cut its carbon intensity by a quarter by 2025 and by 60% by the end of the decade from 2019 levels — without using carbon offsets. The fund has already met the mid-decade goal, which means it may actually increase its carbon intensity for the next few years before the 2025 deadline. But it’s choosing to keep that extra breathing room instead of strengthening its targets. The flexibility allows it to account for the differences between its models and reality, as well as hurdles it might encounter with less cooperative companies it invests in.

For a financial institution like SFM, success in cutting emissions depends both on choosing the right companies to invest in, and also the decisions those companies make — something investors can influence but can’t completely control.

SFM’s Scope 1 and 2 carbon intensity, a measure of tons of emissions per dollar invested, rose from 78 tons for every $1 million in 2019 to a high of 154 tons in 2020. Then last year it fell to as low as 52 tons. The swings underscore one of its challenges. The emissions surge in 2020 was due to just two businesses, said Irby, who declined to identify them.

Aside from trying to persuade companies to do more to cut emissions, SFM’s other tool is divestment. The fund has pledged to stop funding, by 2025, all fossil-fuel extraction companies that don’t have a plan to rapidly cut all greenhouse-gas emissions. But it’s a threat that may not have much impact on those companies because SFM’s share in them is quite small. Its investments in companies including Shell, BP, Halliburton and Energy Transfer account for only 0.2% of its total holdings, or $61 million.

Giel Linthorst, executive director of the Partnership for Carbon Accounting Financials, which has one of the most widely accepted methodologies to count financed emissions, said he appreciates transparency in climate strategies. But he emphasized that PCAF requires financial institutions to set absolute emission targets, not just goals based on intensity.

Irby defended SFM’s decision to set targets based on emissions per $1 million invested, saying that ultimately the fund plans to get to net zero, which will require getting to zero both on intensity and absolute emissions. She added that the fund is tracking its absolute emissions and making sure they aren’t going in the wrong direction.

Still, the biggest unknown for SFM is how the broader corporate world will fare on climate change.

While some large technology companies have set goals to reach net zero as soon as 2030, there isn’t yet a big enough pool of companies committed to reaching that target before mid-century. After starting in 2021 to vote against board directors of public corporations that aren’t disclosing their emissions, SFM said it will this year require businesses to have “credible” plans to transition to cleaner fuels.

Beyond that, it will have to figure out new strategies to reach its ambitious climate goal. “In the years to come, we think there will be some companies in our portfolio that may not reach net zero by 2040,” said Irby. “We aren’t 100% sure yet how we’ll deal with them.”