A nationwide emergency, that allows military and police sweeping powers to arrest and detain people, remains in place.
By Muneeza Naqvi and Anusha Ondaatjie, Bloomberg 22 Jul 2022  08:41 The oceanfront Galle Face camp was swarmed by hundreds of soldiers and police officials who detained some protesters and tore down the makeshift tents. A nationwide emergency, that allows military and police sweeping powers to arrest and detain people, remains in place. 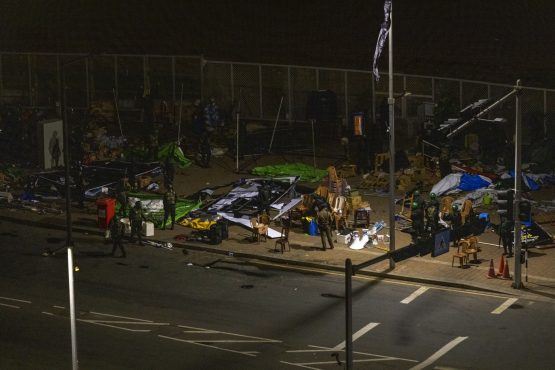 Wickremesinghe appointed Dinesh Gunawardena, an ally of former premier Mahinda Rajapaksa, as prime minister. He will name his cabinet later in the day, as he moves to set up an all-party government to revive bailout talks with the International Monetary Fund. Wickremesinghe was sworn in as president on Thursday after winning a three-way race in parliament.

Sri lanka’s economic crisis, the worst since it gained independence in 1948, has spiraled into a political crisis as well. Soaring inflation and acute shortages of everything from food to fuel to essential medicines have brought thousands of citizens to the streets.

A cowardly assault against PEACEFUL protestors, who agreed to vacate the sites today; A useless display of ego and brute force putting innocent lives at risk & endangers Sri Lanka’s international image, at a critical juncture. https://t.co/E6g9lEUgV1

A new prime minister and cabinet will be sworn in today at 10 a.m., Wickremesinghe’s personal secretary Saman Ekanayake said.

Local media have reported that Dinesh Gunawardena, a close associate of Wickremesinghe, is tipped to become prime minister.  He is a lawmaker with a nationalist group aligned with the Rajapaksa’s party.

The armed forces and police removed protesters from around the presidential secretariat and cleared the area, police spokesman Nihal Thalduwa, told a television news channel.

Protest leaders took to social media to say that government troops assaulted them with batons while the cleared out demonstrators from the protest site in Colombo.

US Ambassador Urges for Restraint by Authorities (5:38 a.m.)

Julie Chung, the US Ambassador to Sri Lanka, has urged for restraint by authorities and immediate access to medical attention for those injured. More than a day ago, she said in a tweet looked forward to working with Wickremesinghe as the new president.

Deeply concerned about actions taken against protestors at Galle Face in the middle of the night. We urge restraint by authorities & immediate access to medical attention for those injured.

Sarah Hulton, the UK’s envoy in Colombo tweeted to say she was “very concerned” about the reports from the Galle Face protest area.

Very concerned about reports from the Galle Face protest site. We have made clear the importance of the right to peaceful protest

Wickremesinghe has called in the country’s military — the army, navy and air force — to maintain public order across the island nation.