Japanese equities reversed losses, while technology shares jumped in Hong Kong. China’s shares advanced as the capital took a step closer to returning to normal. Australian stocks bucked the trend, dropping ahead of an expected second consecutive interest-rate increase Tuesday. S&P 500 and Nasdaq 100 futures rose along with their European counterparts.

Treasury yields stabilised. Stronger-than-forecast US hiring data for May suggested the Federal Reserve won’t waver from its pace of hiking rates to rein in price pressures. The next focus is US consumer-price data due on Friday, which may help indicate whether inflation is peaking. A dollar gauge edged lower.

Crude oil traded near $120 a barrel after Saudi Arabia signaled confidence in demand with a larger-than-expected price increase in Asia. Meanwhile, the US was said to be considering allowing more sanctioned Iranian oil onto global markets to counter the decline in Russian supplies. Copper rose to the highest level since April on China’s easing of virus restrictions. 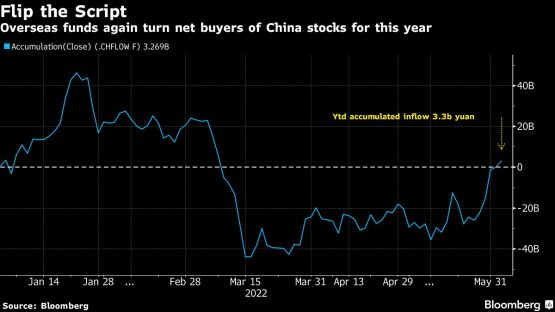 Investors are fretting that a restrictive Fed may plunge the US economy into recession, while China’s lockdowns to control virus outbreaks have choked economic activity and snarled supply chains, adding to concern over accelerating inflation.

The easing of Chinese lockdowns will help abate supply-chain pressures, while ramped up policy measures also boost optimism over China, according to Diana Mousina, a senior economist at AMP Capital. Still, the nation’s services activity contracted more than expected in May amid the restrictions, she said.

“Positive news around Chinese economic activity and cheaper equity valuations could offer value from a long-term investment perspective, but volatility will remain high in the short-term,” Mousina said in a note.

The US jobs report quelled some concern the world’s biggest economy is slowing too sharply, but also strengthened the view that the Fed will keep hiking rates to combat inflation. Cleveland Fed President Loretta Mester said she would back a half-point hike in September if inflation isn’t retreating. Market-derived odds for a third 50-basis-point increase in September are about 85%.

The European Central Bank is set to announce an end to bond purchases this week and formally begin the countdown to an increase in borrowing costs in July, joining global peers tightening monetary policy in the face of hot inflation.

“Liquidity is going out of the market and what that means is it will have an impact on the equity markets,” Charu Chanana, Saxo Capital Markets market strategist, said on Bloomberg Television. “We do expect that the drawdown in the equity markets still has some room to go.”