Pushing the annual trade surplus to a new high and providing support to an economy being dragged down by a property-market slump and sporadic Covid outbreaks.
By Bloomberg News 14 Jan 2022  07:33 China’s record-breaking export strength continued into December, pushing the annual trade surplus to a new high and providing support to an economy being dragged down by a property-market slump and sporadic Covid outbreaks. The data confirms the picture seen all year — strong demand for Chinese goods of all kinds as the nation’s factories pumped out everything from electronics to garden furniture. But trade growth is expected to be weaker in the new year, as demand for work-from-home technology and health care equipment slows and consumption shifts toward services as the rest of world starts to live with Covid.

“Last year’s growth of 30% is clearly hard to sustain. So export growth this year will decline sharply,” partly because global growth is likely to slow down, according to Ding Shuang, chief economist for Greater China and North Asia at Standard Chartered Plc. China’s domestic restrictions and lockdowns aimed at containing virus outbreaks may also cause some delays, but “the key remains how external demand may evolve.”

The omicron outbreak in China is sending jitters through supply chains, as the nation’s production and shipping face disruptions from virus containment measures. While there hasn’t been widespread damage to industrial output or trade so far, some factories have shut down or slowed output in Xi’an and elsewhere, and the capacity of ports in Ningbo, Shenzhen, Tianjin and Shanghai have been affected.

Shipments were stronger than expected for a fifth month in a row, rising to a fresh record. So long as external demand holds up in the face of omicron outbreaks, China’s role as a global manufacturing center should continue to support export.

There will be more uncertain, unstable and unbalanced factors in foreign trade this year, Li Kuiwen, a spokesman for the customs administration, said at a briefing in Beijing. Even though there’s likely to be some pressure on the data, including from a higher base of comparison, the long-term positive fundamentals for trade won’t change, he said. 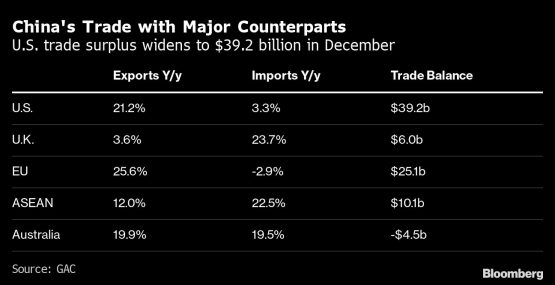 Global dependence on Chinese production may be reduced if places like Southeast Asia recover from their virus outbreaks. That would allow companies to move orders back to that region after some businesses shifted production to China recently to take advantage of the nation’s zero-Covid policies.