IAA has been rebranded to a ‘mobility’ showcase of electric scooters and e-bikes, electric buses and trams, transportation pods, and oh, yes some cars, too.
By Hannah Elliott, Bloomberg 11 Sep 2021  00:28 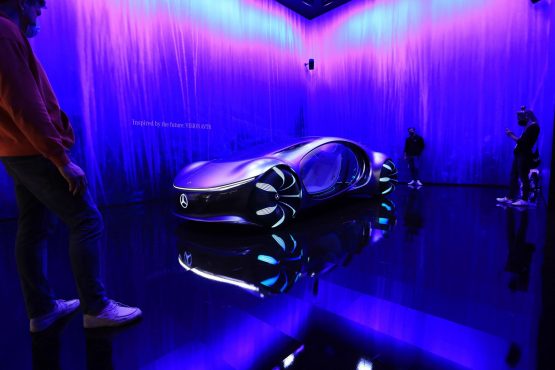 Munich is currently hosting the IAA Mobility, a reinvention of the car show that for seven decades occurred annually in Frankfurt, until the Covid-19 pandemic forced its cancelation in 2020.

Set amid environmental protests that shut down roadways and the buildup to a September 26 election that will see German Chancellor Angela Merkel replaced after 16 years, IAA has been rebranded to a “mobility” showcase of electric scooters and e-bikes, electric buses and trams, transportation pods, and—oh, yes—some cars, too. Luca de Meo, chief executive officer of Renault SA, unveils the Megane E-Tech electric vehicle on opening day. Most brands showing vehicles are based in Germany; the bulk of the rest were, like Renault, based in greater Europe or Asia. (Hyundai, for instance, committed to achieve carbon neutrality by 2045.) Detroits Big Three brands Ford, General Motors, and Chrysler did not officially debut any vehicles. Photographer: Alex Kraus/Bloomberg

It was the first major automotive show to be held since pandemic cancelations brought Germany’s trade show industry a $47 billion loss, according to the Association of the German Trade Fair Industry.

Auto brands were already questioning the relevance of car shows before the novel coronavirus arrived. Ferrari, Aston Martin, McLaren, and Bentley opted to skip this one, too. But several major original equipment manufacturers thought it worth their while to be a part of the confab, which was staged at Munich’s gargantuan convention hall and some of the city’s most significant and beautiful historical sites, including the Bayerische Staatsoper opera house. Merkel and Formula One Champion Nico Rosberg were among the attendees.

Mercedes-Benz unveiled five new electric vehicles (plus a hybrid) to kick off a budgeted $47.5 billion on pushing its electric batteries deeper into consumer land. Foremost among them is the EQE, the follow-up to the stately EQS sedan that Mercedes started selling last month. The EQS’s smaller, less-expensive sibling is expected to bolster the company’s sales volume, revenue, and margins. Attendees view the Mercedes-Benz EQG electric SUV concept on Sunday, before the shows official opening. As the latest take on Mercedess iconic Gelaendewagen, the electric G-Wagen loses the grille of the gas-powered G-Class for a black panel with an illuminated three-pointed star and brilliant, round LED headlights. Protective strips run the length of its body, and a squared-off rear box will hold the spare tire and charging cord. The company has not yet confirmed it will make the EQG but has said this ones design is near production level. Photographer: Alex Kraus/Bloomberg

The AMG EQS, AMG GT 4-Door Coupe, and EQB also joined the group, which was then highlighted by the Mercedes-Maybach design concept SUV, a rounded, two-tone rig with Maybach logos repeated across its nooks and crannies like the stamping of the Louis Vuitton “LV” on a handbag. During a roundtable with reporters, Mercedes-Maybach head Philipp Schiemer said such an expensive vehicle is crucial to Mercedes-Benz’s long-term goals.

“New technology for the luxury customer is always interesting,” Schiemer told the reporters. “There will be more confidence [in electric power] as we move into the new era, so it’s absolutely logical for us to put our efforts toward electrification.” The all-electric, 516-horsepower BMW iX SUV offers 300 miles of range and a battery capacity of up to 113 kilowatt-hours, thanks to dual electric motors and electric all-wheel drive. It is reasonably fast, with a zero to 60 mph sprint time of 4.6 seconds. BMW is currently taking preorders with deposits. Photographer: Krisztian Bocsi/Bloomberg The BMW i Vision Circular Concept vehicle is made using primary materials and is 100% recyclable, according to BMW. Image: Krisztian Bocsi/Bloomberg

Meanwhile, hometown hero BMW announced it would its double orders for battery cells as it unveiled the production versions of its iX and i4 electric cars, as well as a number of electric motorcycles. The BMW i4 sedan is like an electrified BMW 4 Series vehicle, with an estimated 300-mile range and a starting price of just over $55 000.  Image: Krisztian Bocsi/Bloomberg Chief among the BMW proposals was the iVision Circular pod made from recycled, unpainted aluminum, steel, and other reused materials. The conceptual hatchback was intended to show what a BMW could be like in the year 2040. It most notably elongated the shape of the signature kidney grills on the front and gained digital surfaces along its window trims and undulating lights along the rear.

Stuttgart, Germany-based Porsche showed an electric vehicle that’s decidedly not about recycling and more about driving—fast. The Porsche Mission R concept is the company’s hypothetical take on what a customer “cup car” racer would be like if powered by electric batteries. Roughly the size of a Porsche Cayman, with a single seat and a roll cage integrated directly into its roof, the Mission R is neither road-legal nor cleared for FIA-sanctioned racing. If given the go-ahead, the car is likely to be produced in 2024 or so and would comply with whatever regulations are in place, Porsche CEO Oliver Blume tells Bloomberg.

Along with e-fuels, fast-charging networks, hybrids, and the successful electric Taycan sedan, the car is part of Porsche’s goal to become carbon-neutral by 2030. “We see ourselves as pioneers in investing and developing this technology,” Blume says.

As for Audi, the Ingolstadt, Germany-based VW brand unveiled the second in its series of three “sphere” conceptual cars, the Grandsphere, just weeks after it showed the Skysphere coupe concept in Los Angeles.

The electric precursor to a sedan set for production in 2025, Grandsphere has an autonomous mode that tucks away the steering wheel and pedals; it has a total driving range of 466 miles and can charge for 186 miles of driving in 10 minutes when needed, using a special charger.

Audi brass have promised to make all new vehicles electric from 2026 on. Annual deliveries of Audi cars will double to 3 million by 2030, they said.

Judging from the week in Munich, the German automakers may fare well with their fast-approaching gamble on electric mobility—at least in Europe. German sales of electric cars are expected to reach 3.4 million annually in 2040, according to Bloomberg NEF’s long-term electric vehicle outlook. The figure would amount encompass more than 90% of the country’s entire new-car sales. While many electric cars unveiled at the Munich show fall into the luxury segment, the Volkswagen ID. Image: Alex Kraus/Bloomberg

Here is a (cynical) business opportunity for SA, with our vast open spaces, and cheaper living costs:

…3rd world countries like SA may become the global dumping ground of automotive electric battery components. A new wave of “e-waste”.
But SA stand to gain US$ and Euro foreign currency earnings.

(….just motivate your corrupt local ANC-controlled towncouncil to join the initiative to become a battery dumping ground, to boost the town’s dire finances. All these ‘new’ towns I cannot pronounces the names of…here’s your chance. Think of today…don’t worry of tomorrow’s consequences) 🙁