Rent collection day last Wednesday looked like a disaster for mall landlords in the UK Reeling from the coronavirus lockdown, tenants including JD Sports Fashions, Boots drugstores and Primark withheld some payments pending negotiations with landlords. Estimates vary widely as to how much was paid of the 2.5 billion pounds ($3.1 billion) due — from 10% to 50%.

Whatever the final tally, the balance of power between retailers and their landlords has indelibly shifted. The days when well-known retail chains signed 25-year leases dictating that rents only rose were already largely consigned to history. But the retail apocalypse wrought by Covid-19 means that landlords have no choice but to accept even shorter leases and far more flexible terms with a good dose of the right services thrown in.

As I have argued, the pain from the pandemic must be shared between retailers and property owners on both sides of the Atlantic. The future of the mall depends on it.

Brick-and-mortar outlets were already facing existential questions from the rise of Amazon.com Inc. and other online retailers, and many traditional retailers had started to embrace e-commerce too. Covid-19 is accelerating this shift. At the end of last year, digital accounted for about 30% of UK retail sales excluding food. This could increase to more than 40% over the next year or so, according to independent retail analyst Richard Hyman.

The trend makes store economics even more challenging. Moving sales online has its own costs, from stock management to processing returns, which can’t be offset with a commensurate reduction in store expenses. And now retailers have to invest to adapt their shops to social-distancing rules.

With such pressure on profits, some stores will inevitably have to close. Those that don’t will have to cut costs, and that includes rent. In order to better manage cash flows, it’s imperative they be allowed to move to monthly rent payments from quarterly ones. 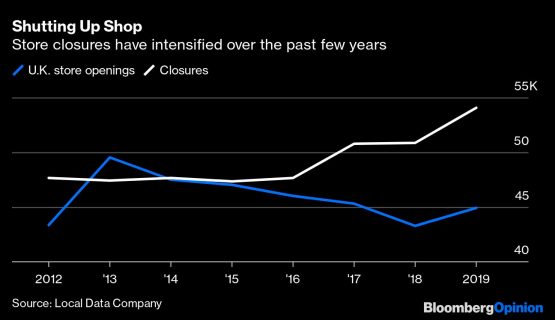 Another option is for landowners to offer so-called turnover rent deals based on a proportion of in-store sales, usually underpinned by a minimum fee. This model, already common in off-price retail parks, aligns everyone’s interests. It gives mall owners an incentive to make their properties as appealing to customers as possible, with a pleasant environment, concierge services and a good mix of tenants covering retail, food and leisure. And retailers would be more inclined to sign for a longer period.

The downside for property companies is more uncertainty because they cannot count on a guaranteed income stream to pay down their debt. Still, this is probably better than an empty unit. 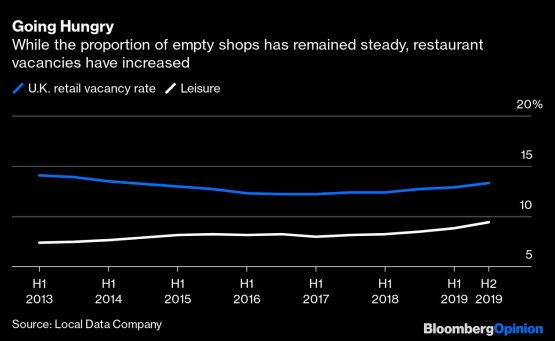 As push comes to shove, it’s best relations stay cordial. After all, retailers have promised to pay their landlord, and rent that hasn’t been collected during the pandemic isn’t written off. Yes, there’s a case for leniency when chains are clearly in distress. But it’s harder to justify withholding what’s due when retailers have remained largely open, such as Boots, or are in good shape financially, such as JD Sports.

There are good reasons to encourage constructive dialogue. Store chains that take an aggressive stance may be exposing themselves to legal action. In the US, Gap is facing suits from Simon Property Group and Brookfield Property Partners. Plus, now that leases are much shorter, discussions over the proper rent come around much more frequently. When they do, companies that paid in full during the crisis may be able to secure better terms than those that reneged.

With no let up in the ferocity of retail competition, it’s smart to strike more favourable deals in the future. But any tense moments should be saved for the contract negotiations, not quarter day.

This has been evident for years now. The UK economy is sucking up South African money!!!!! When will everybody catch a wake up. America, parts of Europe, Asia and Africa are the places to invest. The Free Trade agreement is the biggest game changer in the world and South Africa is finally back as the place to invest!!!

Invest to have your money looted.

Drop the rent and it might go better.An acquaintance of mine had a business and the rent was R75k a month, the landlord didn’t wanted to give him 1 cent discount during lockdown so he closed down.

I assume this is related to the SA space and not the UK. I think dropping rents sounds attractive but the challenge is that property valuations are not going to drop overnight. The government wants their tax and rates based on valuations.

Mall valuations must be plummeting.

All depends on who’s doing the valuation…

True. But there is only so long that that skullduggery can be pushed.