There are signs that the food inflation that’s gripped the world over the past year, raising prices of everything from shredded cheese to peanut butter, is about to get worse.

The Covid-19 pandemic upended food supply chains, paralysing shipping, sickening workers that keep the world fed and ultimately raising consumer grocery costs around the globe last year. Now farmers — especially ones raising cattle, hogs and poultry — are getting squeezed by the highest corn and soybean prices in seven years. It’s lifted the costs of feeding their herds by 30% or more. To stay profitable, producers including Tyson Foods Inc. are increasing prices, which will ripple through supply chains and show up in the coming months as higher price tags for beef, pork and chicken around the world.

Feed prices “go up and down, and you tend to take the rough with the smooth,” said Mark Gorton, managing director at the British chicken and turkey producer Traditional Norfolk Poultry. “But when it rallies as much as it has, it starts to impact massively on the business.”

The last time grains were this expensive was after the US drought of 2012, and meat prices saw a dramatic run-up. Now, meat is again poised to become a driver of global food inflation, and part of the intensifying debate over the path of overall inflation and exactly what central banks and policymakers should do to aid economies still working to recover from the pandemic.

Vaccinations promising a return to normal life and fiscal stimulus programs amounting to trillions of dollars are already expected to unleash pent-up demand and drive a surge in consumer prices. US and European bond markets are sending signals that inflation is back. Americans’ one-year inflation expectations last week rose to the highest since 2014. 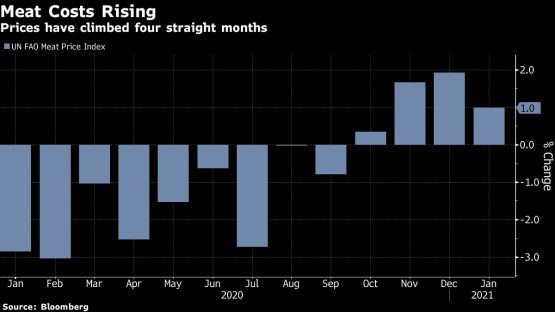 As for what’s driving the feed prices, that’s due to bad crop weather shrinking world harvests. Demand is also increasing. China, the biggest buyer of commodities, is scooping up record amounts of the available supplies to feed its expanding hog herds.

Meat producers across major exporting countries are feeling the impact of the higher grain costs. In Brazil, the biggest poultry shipper, the cost of raising chickens jumped 39% last year due to feed, according to Embrapa, a state-owned agricultural research agency. Costs rose again last month by around 6%, said Itau BBA bank.

In Europe profitability of livestock operations has plunged due to the combination of high feed expenses and stifled demand from Covid-19 lockdowns. Some smaller hog farmers may be forced to exit the market, according to Rabobank senior analyst Chenjun Pan.

“We definitely expect profit margins to be squeezed and then producers will have to somehow start thinking about how they’re going to cover that price,” said Upali Galketi Aratchilage, senior economist at the FAO.

Meat prices at retail grocery stores rise the most after farmers shrink their herds due to declining profits. That’s a process that takes time, which means there’s a lag between the feed-cost inflation and rising consumer prices, said Will Sawyer, animal protein economist at farm lender CoBank ACB.

In the US, livestock and poultry operations have already started contraction due to slim profits amid the pandemic. The American hog herd in December fell 0.9% from the previous year and the cattle herd in January by 0.2%, according to government data. Cattle profits are already down. CRI Feeders in Oklahoma, a feedlot with 42 000 animals bulking up on corn, is breaking even, said co-owner Scott Anderson. Expanding drought is withering pastures and feed prices have shot up 30%.

The market and weather challenges likely will prompt ranchers to scale back, according to Clayton Huseman, executive director of the Kansas Livestock Association.

“Over the next couple of years, we do expect the supply to get tighter,” Huseman said.

Ah OK! The grain price went up in Brazil, hence the increase in meat prices. Note to farmers. Please start feeding your grazing animals grass again, since that is free. If you plan your farming well, there should not be shortages, except in extreme drought situations.

These grain fed animals are anyway part of our obesity syndrome experienced everywhere in the Western world.

Sad part of the modern world is that grass fed animals take at least twice as long to weigh enough to slaughter and the meat is not going to be marbled with fat, tender and tasty like that from feedlot animals.

C-suite in the knoe 3 months ago

Henry666, have you ever reared anything other than a pet or maybe a child. Do you have a herd of cattle, flock of sheep, chickens.

Those animals that you breed and rear on grassonly is called organic – PS grass is not for free. The premium of that carcass delivered to market roughly 25% more expensive than those in feeding lots. Food scarcity and land shortage is real. In your model 25% of all South Africans wont it meat.
1) Price
2) Time to market

Farming has become a science, not a cottage industry. We can tell you how many kgs of grass converts into 1kg of protein on the hoof.

Free cattle farming lesson are presented over weekends in the Free state. We start work at 04:30 and finish at six pm (calving season excluded then it is 24/7).

Hope to see you soon and wear Khaki’s