Donald Trump’s attempt to avoid testifying in a civil probe of his real estate business triggered a flood of early revelations from New York Attorney General Letitia James in a court filing seeking to justify her investigation.
By Erik Larson, Bloomberg 22 Jan 2022  00:37 Donald Trump’s attempt to avoid testifying in a civil probe of his real estate business triggered a flood of early revelations from New York Attorney General Letitia James in a court filing seeking to justify her investigation.

The Democrat late Tuesday night offered the court a detailed preview of her findings so far to push back on Trump’s claim that the investigation is political theater and bolster her request for a court order forcing the former president and two of his children, Donald Trump Jr. and Ivanka Trump, to sit for depositions and hand over documents. 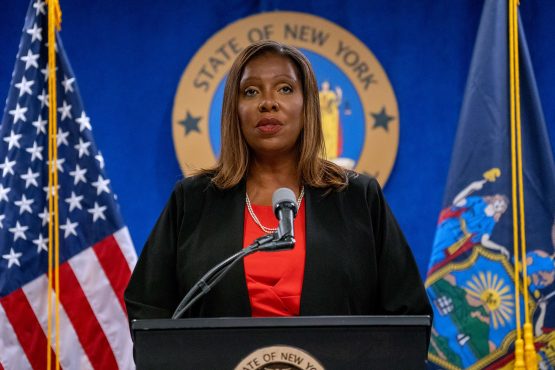 The filing, in state court in Manhattan, doesn’t accuse Trump of breaking any laws or suggest that criminal charges will be brought. But the evidence shows “significant” examples of “fraudulent or misleading” valuations that helped Trump win better terms for loans, insurance coverage and tax deductions, James told the court. She said the discrepancies cover a wide variety of assets, from undeveloped lots for luxury homes to improper markups for the value of Trump’s brand.

Alina Habba, a lawyer for Trump, reiterated in an email his claim that James started the investigation to advance her political career, calling the filing “merely the latest in a long line of unfounded attacks against my client.”

Here are highlights of the filing.

This 212-acre property in Westchester County, near Manhattan, was purchased by the Trump Organisation in 1995 and has been at the centre of James’s probe since it started in 2019. Trump valued Seven Springs at $80 million in 2004, at $200 million in 2007 and at $291 million in 2012, James said. The last jump in value was based on the questionable claim that Seven Springs was zoned for nine luxury homes worth $161 million in profit, she said.

“Two separate, professional appraisers valued the lots that were supposedly going to be developed at mere fractions of the prices used in the Trump Statement of Financial Condition,” James said.

Evidence uncovered in the probe so far shows the Trump Organisation overvalued Trump’s massive Manhattan triplex apartment in Trump Tower, which at one point jumped in value by $127 million, James said. Former Trump Organisation chief financial officer Allen Weisselberg admitted the value of the apartment was overstated by “give or take” $200 million, according to the attorney general.

Trump International Golf Club Scotland, purchased by the Trump Organisation in 2006 for $12.6 million, was valued at about $161 million in 2011 for Trump’s financial statements, James said. But the valuation wasn’t prepared by a professional and was instead based on an email “to provide information to Forbes magazine for a quote,” according to the attorney general.

Trump’s 2014 financial statement valued the Scotland property at $435 million, in part “by assuming the right to build 2 500 luxury homes on the property despite approval to build fewer than 1 500 holiday apartments and golf villas,” James said.

The former president’s financial statements falsely represented that they didn’t include any brand value, even though an “undisclosed added brand premium” had been tacked on to most of the listed properties, James said. Trump was “personally aware” of the alleged brand value discrepancy, which contradicted the expectations of financial institutions that provided loans and insurance for the properties, James said in her statement

The Trump National Golf Club Westchester was valued at $68.7 million on Trump’s 2011 financial statements, James said. That was based in part on the projected value of initiation fees of $150,000 each for 67 unsold memberships, a figure that was expected to “only rise,” according to the attorney general.

“But the investigation determined that the $150,000 number was false,” James said. “Many new members paid no deposit at all in 2011, and Trump Organization records showed no members paid an initiation fee in 2012.”

James said evidence uncovered in the probe shows that for years Weisselberg misrepresented the source of valuations on Trump’s financial statements in order to secure favourable terms for insurance coverage. For example, Weisselberg falsely claimed on several occasions that valuations in Trump’s personal financial statements were prepared by professional appraisal firms, she said.

One such appraisal “substantially overstated” the value of land donated at the Los Angeles property by giving an unrealistic timeline for developing the site and “failing to account for a reduction in affordable housing requirements that the donation enabled,” according to James’s filing. One appraiser wrote that Trump was “fighting for every $1,” she said.

James said the evidence indicates a similar problem with 158 acres donated at Seven Springs in 2015 after Trump’s effort to develop the property failed. The attorney general said she found evidence that the number of lots Trump used to calculate the value of the so-called conservation easement “was more than double what was permitted by development restrictions imposed by a locality — restrictions that the Trump Organization was long aware of.”

We already know that this obnoxious representation of the average American, with his immature behavior patterns, is fake. His hair, choice of women, and impolite demeanor have given him away since day one. People identify with him to such an extent that he became president of the mightiest nation on earth.

This same Kewpie doll who controlled the key to the arsenal of atomic bombs antagonized China and the rest of the world with all kinds of profanities.

I agree with his economic policies but he presents himself as a hooligan with a chip on the shoulder. What is wrong with these Americans? They need some culture.

What amazes me with Trump disciples is that they are so desperate for somebody, anybody, that is also anti climate change, pro racism that they ENTIRELY ignore the many personal aspects of the man that should fundamentally offend these generally religious and conservative people.

Their greatest disappointment with Trump not is that he is a wife cheating, chauvinist, narcissistic tax cheating con man, but that he is vaccinated.

so many down votes! Over a 100 on three comments! The mostest muchest amazingly beautifulest down votes (waves little hands and smirks)

what is unusual is there are no replies about mass media fake news woke cancel libtards. Strange

Johan, one thing is clear – the local Trump supporters are from the same demographic group as his American supporters. He is an actor that positions himself to get the support of the swing vote. That is the working class without a college education. This particular group identifies with a “successful businessman” who promises to act against the immigrants and foreigners who threaten their job security. They compete with a Mexican immigrant for the same job. Building a wall is the logical solution to sell to them.

Trump is an astute businessman all right – He sells the product that his support base eagerly buys. He knows his clients. He does not necessarily identify with them. The ratio between upvotes and downvotes here indicates the difference in the levels of education and perceptions of readers. It displays the demographic position of readers.

Such is the way of the Narcissist … I know all, am surrounded by idiots and only I can see it.