The UK has focused its attention on liberalising trade with the US on a state-by-state-level since federal-level trade negotiations were frozen when Biden became president.
By Ellen Milligan, Bloomberg 19 May 2022  07:45 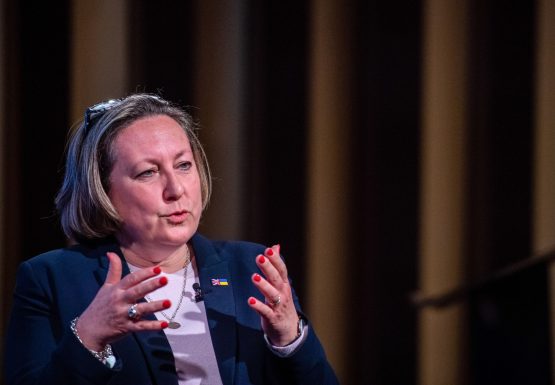 The UK expects to secure about six trade deals with US states by the end of the year, as discussions with President Joe Biden’s administration over a wider free trade agreement remain frozen.

The lower-level accords will likely aim to loosen barriers through memorandums of understanding covering measures such as mutual recognition of professional qualifications and improved access to procurement contracts, UK Trade Secretary Anne-Marie Trevelyan said on Wednesday in an interview.

“There will be about half a dozen probably across the course of the year as we crystallise what the different states are looking to release with us through MOUs,” Trevelyan said. “It’s mostly around services but there will be some opportunities for procurement to access.”

While Trevelyan declined to specify which states deals may be struck with, her ministerial team has been in talks with states including California, Georgia, Tennessee, Oklahoma, Indiana and South Carolina. Last month, trade minister Penny Mordaunt said she hopes to do a state-level agreement with Texas by October.

The UK has focused its attention on liberalising trade with the US on a state-by-state-level since federal-level trade negotiations were frozen when Biden became president. Prime Minister Boris Johnson had held up a US deal as one of the great prizes of Brexit, and Trevelyan signaled she still thinks a wider deal is possible.

“In terms of how we pull the FTA together, the wider piece, that’s a conversation that we will hopefully be able to have by the end of the year,” Trevelyan said. “Don’t say we can’t do the US — of course we can do it, there’s so much opportunity and we’re really looking at it piece by piece.”

The comments come a day after Foreign Secretary Liz Truss announced plans to introduce legislation within weeks to unilaterally override parts of the post-Brexit settlement for Northern Ireland that it negotiated with the European Union. US legislators have warned that approach risks undermining the British push for a trade deal.

“If this occurs, moving forward with a UK-US trade agreement will be scuttled,” Bill Keating, a congressman with Biden’s Democrats, told Times Radio on Tuesday. “That’s just the reality of what will happen here — not a threat but a reality check.”

The US Congress would need to approve any trade agreement that significantly lowers tariffs. For his part, Biden, who is of Irish descent, has repeatedly warned that tensions over the deal, called the Northern Ireland Protocol, mustn’t jeopardise peace in the region. Truss has insisted that the legislation would help restore stability to the 1998 Good Friday Agreement.

Trevelyan said that “where there is a US anxiety” that the British approach is undermining peace, she’s happy to explain the position to her American counterparts.

In a a question-and-answer session and interview after delivering a speech on green trade at Bloomberg’s London headquarters, Trevelyan also: