Both Javid and Hunt have promised to cancel a planned increase in corporation tax and reduce it to 15% from 25%.
By Joe Mayes and Kitty Donaldson, Bloomberg 11 Jul 2022  07:25 The race to replace Boris Johnson as UK prime minister is intensifying, with Conservative Party contenders muscling in and clashing over their tax plans.

Sajid Javid, the former health minister whose resignation helped spark Johnson’s abrupt downfall, and former Foreign Secretary Jeremy Hunt, who lost to Johnson in the 2019 leadership runoff, both set out their priorities on BBC TV on Sunday, putting tax-cutting at the center of their campaigns. The pledge is a red-meat topic for the Conservative Party core, who ultimately decide the leader.

Both Javid and Hunt have promised to cancel a planned increase in corporation tax and reduce it to 15% from 25%. Javid went a step further, pledging to reverse a payroll tax that was introduced by his successor as Chancellor of the Exchequer Rishi Sunak.

“You must start with the tax cuts to kick-start growth,” Javid said on the BBC. “I am really worried that we as a country are at risk of falling into a slow-growth, low-growth trap.”

Hunt defended his offer, which doesn’t include cutting personal taxes, by saying he wants to avoid fueling rising prices in the UK.

“Cutting business taxes won’t stoke inflation,” he said. “Tackling inflation has to be the main challenge.”

Trade minister Penny Mordaunt also officially entered the contest on Sunday, bringing the total number of contenders in the race to be Britain’s next prime minister to 10. The other candidates include Nadhim Zahawi, who replaced Sunak as chancellor after he resigned on July 5, Foreign Secretary Liz Truss and Transport Secretary Grant Shapps. Tom Tugendhat, the centrist chair of the House of Commons foreign affairs committee who was often critical of Johnson, is also running.

Our leadership has to change. It needs to become a little less about the leader and a lot more about the ship.

Conservatives organizing the contest are keen to whittle down the crowded field to a final two before Parliament goes on its summer recess on July 21. Over the next few days, barbs both political and personal will fly, and alliances will develop as candidates seek to short up support from their fellow Members of Parliament, who decide who goes through to the runoff.

In announcing his run in the Times newspaper, Johnson loyalist Shapps took a swipe at Sunak, who resigned about the same time as Javid on Tuesday.

“I have not spent the last few turbulent years plotting or briefing against the prime minister,” Shapps told the paper. “I have not been mobilizing a leadership campaign behind his back.”

Sunak declared his candidacy Friday in a slick video that raised eyebrows among Tory MPs who suggested plans had been in the works for longer than a few days. And in what the Sun newspaper called the kind of dirty trick likely to sully the contest, a clip from 2007 resurfaced online showing Sunak making a dismissive comment about the working class.

Truss will launch her bid by pledging that she’ll advocate “classic Conservative principles,” the Mail on Sunday reported. Zahawi began his campaign with his own low-tax pledge and seemed to garner endorsements even before he announced, including from former Northern Ireland secretary Brandon Lewis.

Truss ranked just behind Sunak in an Opinium poll for Channel 4 News. He was backed by 25% and Truss by 21% in the survey of Conservative Party members, who will pick from the final two candidates.

Other declared candidates from outside Johnson’s cabinet are pro-Brexit Attorney General Suella Braverman and Kemi Badenoch, minister of state for equalities.

Defence Secretary Ben Wallace, initially seen as a favorite to succeed Johnson, said Saturday that he decided not to run.

The 1922 Committee of rank-and-file Tory MPs is drawing up plans for an accelerated leadership contest. The two finalists will then embark on a six-week tour of the UK, and more than 100 000 Conservative party members will decide who moves into 10 Downing Street.

Meanwhile, Johnson will stay on until his successor is announced, which the party said will be in September. He’s appointed a caretaker government which he insists will not “make major changes of direction.” 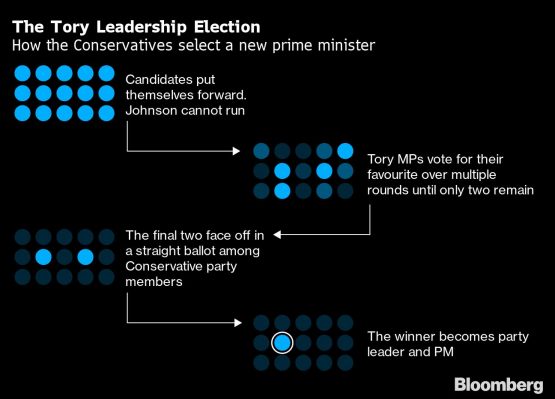