A formal move by EU leaders to grant candidate status to Kyiv expected at the bloc’s summit.
By Bloomberg 23 Jun 2022  10:07

The timeline for Ukraine to achieve EU membership will hinge on the country’s ability to enact reforms, as well as the course of the war, a top aide to President Volodymyr Zelenskiy said.

A formal move by European Union leaders to grant candidate status to Kyiv after intense lobbying is expected to come at the bloc’s summit in Brussels starting Thursday.

German Economy Minister Robert Habeck will trigger the second stage of the country’s three-phase gas-emergency plan later on Thursday, according to a person familiar with the plan.

On the ground
Fighting continued in the eastern city of Sievierodonetsk, and the vicinity of the Azot chemical plant, where more than 550 civilians are sheltering, was hit by shelling, according to Serhiy Haiday, the governor of the Luhansk region. Zelenskiy said the situation in Luhansk was “the toughest” in the country. Russian troops seized two more villages south of Lysychansk, a stronghold Kyiv relies on in its defense in that area. In neighboring Donetsk, fighting raged along the entire front line. Residential buildings, a school, railway tracks and other facilities were damaged, with one person killed and 15 injured, according to Ukraine’s military, which also reported heavy fighting in the southern region of Kherson.

“Ukraine should become a candidate country for EU membership and then move further on the path to the integration with the European Union,” Zhovkva said. He warned that negotiations might be tough and difficult. While much depends on the course of the war, the pace of reforms will also be critical, he said.

Zhovkva said Moscow would need to withdraw its troops to the lines of Feb. 23 to resume diplomatic talks. There are no talks planned between Ukraine’s Zelenskiy and Russian President Vladimir Putin.

Germany to Trigger Phase Two of Emergency Gas Plan (8:53 a.m.)
German Economy Minister Robert Habeck will trigger the second stage of the country’s three-phase gas-emergency plan  on Thursday, according to a person familiar with the plan.

Habeck warned Wednesday that Europe’s biggest economy should brace for a further cut in Russian gas flows after Moscow last week slashed deliveries on its main pipeline to Europe. An official familiar with the government’s plans, who asked not to be identified, said the second phase of the three-stage crisis plan could come as early as this week.

Enacting stage two — the “alarm” phase — could mean a change in the law to allow energy companies to pass on cost increases to homes and businesses. It may also involve firing up more coal-fired power plants to minimize gas consumption.

Russia Faces Fresh Bond Deadline (6:00 a.m.)
Another pressing Russian bond deadline looms Sunday night on previously missed payments from late May. Those funds — about $100 million of bond coupons — are stuck due to international sanctions and the grace period to find a solution expires at the end of June 26. At that point, Russia will effectively be in default, unless it somehow gets payments through to sufficient holders of the debt.

Billions of dollars of energy revenue pour into Kremlin coffers each week but the country has failed to meet the deadlines because mounting sanctions are cutting off avenues to transfer the cash. 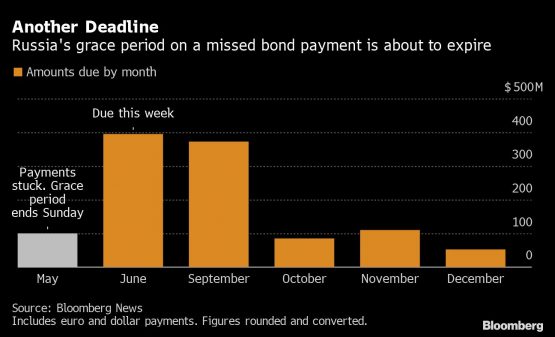 Megayachts Running Low on Safe Harbors (1:00 a.m.)
Russian tycoons are running out of places to park their floating palaces, four months after their country’s invasion of Ukraine. The US and Europe are going after their superyachts, villas and other assets because of their ties to Russian President Vladimir Putin. Already, more than a dozen boats worth more than $2.25 billion have been seized by the US, EU nations and willing allies — such as Fiji.

Fearful of having their yachts seized, owners have sent them to a small number of locales still considered friendly — allowing the vessels to dock or hang around unbothered — including Dubai in the United Arab Emirates, Turkey and the Maldives, according to Spire Global Inc., a data and analytics firm that uses satellite technology to track maritime activity. Von der Leyen Praises Ukraine Before Council Decision (5:15 p.m.)
Ukraine implemented about 70% of EU rules, norms and standards, European Commission Ursula von der Leyen said in a speech in the European Parliament. She praised the “immense progress that Ukraine’s democracy has achieved,” but emphasized that more work is needed to fight corruption and loosen the grip of oligarchs on the Ukrainian economy.

Expressing her support for Kyiv’s EU candidacy status, von der Leyen said that “it is now up to the European Council to decide, and live up to the historic responsibility we are confronted with.”

Ukraine is going through hell for a simple reason: its desire to join the EU.

The @EU_Commission answered this desire explicitly.

Our opinion acknowledges the immense progress that

Germany Plans Conference to Set Up Ukraine Marshall Plan (4:20 p.m.)
Chancellor Olaf Scholz said Germany and the EU will jointly host an international conference with donors and experts later this year to discuss a multibillion-euro reconstruction plan for Ukraine.

“We have to agree on this — also with the advice of experts and scientists — how such a Marshall Plan for Ukraine can look like, how we coordinate it internationally, how we will decide together on which investments help Ukraine to move forward the most quickly on its European path,” Scholz told lawmakers in Berlin.