Ukraine latest: Lavrov in no rush to respond to Blinken request

The US State Department approved the sale of as much as $8.4 billion in weapons to Germany, including F-35 fighter planes and munitions.
By Bloomberg News 29 Jul 2022  10:49 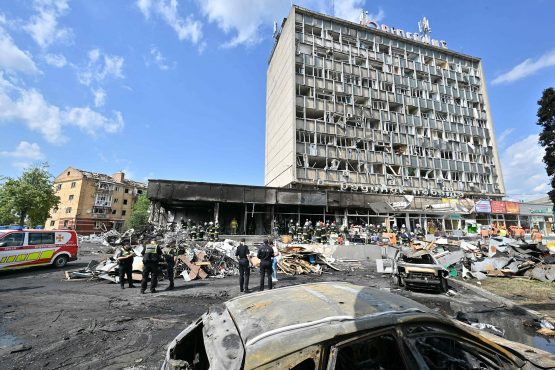 European data offering a snapshot of the economic impact on the rest of the continent of Russia’s war on Ukraine showed a surprising resilience in France, Italy and Spain. Germany, though, stagnated, as curbs in Russian gas supplies and the threat of a total cutoff overshadowed the region’s biggest economy.

Norway donated 14 armoured patrol vehicles to Ukraine that were requested by the authorities in Kyiv. The US State Department approved the sale of as much as $8.4 billion in weapons to Germany, including F-35 fighter planes and munitions. Local authorities reported missile strikes in Kharkiv, while the city of Mykolaiv was shelled overnight. Russian forces also shelled parts of the Chernihiv and Sumy regions, according to Ukraine’s general staff. It added that Russia was attempting offensives in the districts of Novoluhanske and Soledar, and that hostilities were ongoing. Ukrainian troops struck Russian munition depots in Ilovaysk and Brylivka, located in the seized areas of the country’s east and south respectively, Ukrayinska Pravda reported, citing the military staff’s Telegram channel.

Russian Foreign Minister Sergei Lavrov will reply to US Secretary of State Antony Blinken’s request for a phone conversation when he has time, Interfax cited his spokeswoman as saying.

Blinken on Wednesday said he expected to discuss a potential prisoner exchange and a deal to unlock Ukraine grain exports by phone with Lavrov. The Kremlin said no agreement had yet been reached on the Russian-American detainee swap.

My fellow G7 ambassadors and I are in Odesa with Turkey to reiterate the importance of the UN-brokered deal allowing food to be shipped out of Ukraine.

Russia must respect the deal. #FoodIsNotAWeapon

Germany’s economy stagnated as the rest of Europe smashed expectations, showing the continent is on an uneven footing. Spain and Italy both reported second-quarter growth of 1% or more from the previous three months, buoyed by an influx of post-lockdown tourists. Germany failed to grow, and a recession is becoming more likely.

France’s economy returned to growth with faster expansion than expected, putting it on a firmer footing as surging inflation and energy woes threaten recession in Europe.

Swiss exports to Russia of turbojets, air pumps and other machinery surged in the past two months as manufacturers raced to fill any orders signed before sanctions over Moscow’s invasion of Ukraine render some of the sales illegal.

Bloomberg Intelligence finds in a new report that projections of a $50 billion loss in the Russian banking sector may be too high. Key datapoints used to track the impact of sanctions suggest that the response of Russian policymakers aimed at averting a banking crisis has been effective, with Russia’s control of gas flows to Europe the main lever to ease economic pain.

It’s Getting Easier for India to Buy Russian Oil (8 a.m.)

India is set to get more channels to buy cheap Russian oil, with a new wave of smaller, international traders muscling into its vast market by offering barrels shunned by rivals after the invasion of Ukraine.

F-35 fighter planes built by Lockheed Martin Corp., the newest extended-range air-launched cruise missiles and dual laser-GPS-guided smart bombs are among $8.4 billion in American-built arms sought by Germany and approved by the US State Department.

Although the department’s announcement Thursday made no direct mention of the war in Ukraine, it said that “this proposed sale will support the foreign policy and national security of the United States by improving the security of a NATO ally that is an important force for political and economic stability in Europe.”