Oil fluctuated as investors weighed a pledge by the Group of Seven to ban imports of Russian crude against a cut in official prices by Saudi Arabia and the impact of China’s energy-sapping lockdowns.
By Bloomberg News 9 May 2022  10:18

President Vladimir Putin said in his annual Victory Day address that Russian troops in Ukraine were fighting to ensure there wouldn’t be a repeat of a global conflict like the Second World War.

He called the conflict with Ukraine and NATO inevitable and repeated claims that it was a response to preparations to attack areas controlled by pro-Russian separatists and to invade Crimea.

The speech came as Russian troops marched through Red Square in an annual display of military might marking the defeat of Nazi Germany in World War II. The event’s taken on additional significance as Russia’s military struggles to make gains 10 weeks after its invasion triggered repeated rounds of sanctions.

Sweden’s ruling party, the Social Democrats, will announce its stance on membership in the NATO defense bloc on Sunday, May 15, according to a report by state broadcaster SVT.

Finland is expected to apply for entry before May 17, while Sweden’s stance has been less clear. Both Nordic nations have in past days been winning assurances of help if threatened by Russia in the interim period between an expected application to join the bloc and an eventual entry.

About 11 000 troops marched across Red Square in Moscow, with nuclear missile launchers, tanks and air-defense systems due later, as cities across Russia marked the end of World War II with parades and pageantry.

“Today, you’re defending what our fathers, grandfathers and great grandfathers fought for,” Putin told the troops at the beginning of the Moscow parade.

A Russian missile hit a Jewish cemetery in Hlukhiv near the Russian border on Sunday as residential areas in the south and east of Ukraine continued to face attack, the Ukrainian General Staff said.

Seven people were killed and 11 wounded in Luhansk and Kharkiv over the past 24 hours, it said.

Luhansk Governor Serhiy Haiday said on Telegram there would be no evacuations from Luhansk Monday as Russian forces were shelling the Lysychansk-Bakhmut highway. He said fighting was also hindering rescue efforts in Bilohorivka, with no new bodies recovered from the rubble of a destroyed school in the area.

German Chancellor Olaf Scholz defended his government’s efforts to support Ukraine in a bid to revive his flagging popularity after voters delivered a bruising defeat for his party.

The 63-year-old Social Democrat is struggling to regain momentum after getting battered at home and abroad for dragging his feet on supplying Ukraine with heavy weapons and halting Russian energy imports. The fallout of a disjointed approach to the conflict became clear on Sunday, with the SPD suffering its first defeat since he took office in December.

Scholz’s party slumped to third in Schleswig-Holstein, tumbling by about 11 percentage points compared with the previous election in 2017.

Oil fluctuated as investors weighed a pledge by the Group of Seven to ban imports of Russian crude against a cut in official prices by Saudi Arabia and the impact of China’s energy-sapping lockdowns.

West Texas Intermediate traded near $110 a barrel after earlier losing as much as 1.7%. The US and the UK have already moved to ban imports of Russian fuel in response to the assault, but the weekend pledge by the G-7 will increase the pressure on Moscow further. 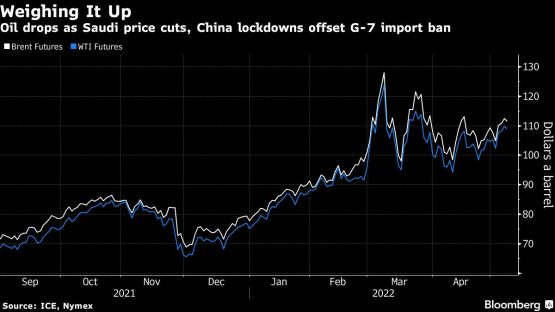 The US banned American accounting and consulting firms from working with Russia and imposed its first sanctions on Gazprombank.

The latest penalties include new export controls on industrial goods, limits on three of Russia’s top state-controlled television stations and additional visa restrictions, according to a White House statement.

The impact of the ban is likely to be limited, as the world’s third-largest economy imported only 3.6% of its crude oil from Russia in March, compared to 10.8% of its coal and 8.8% of its gas in 2021. Still, the move threatens to add to surging gasoline costs that have stoked inflationary fears ahead of an upper house of parliament election two months away. 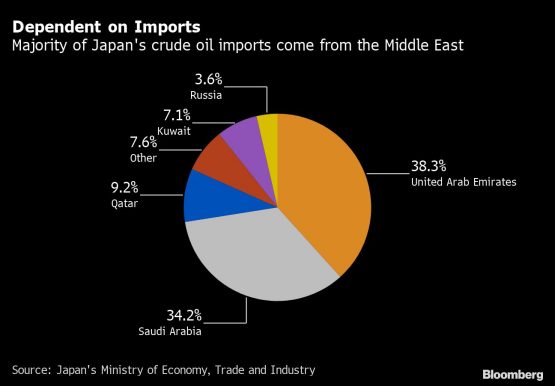 one key difference from WWII : russia has lost the Ukraine war