Japan is also looking to curb imports, in what could be a shift in policy from one of the world’s largest energy buyers.
By Bloomberg News 8 Apr 2022  07:51 European Union countries agreed to ban coal imports from Russia, the first time the bloc’s sanctions have targeted Moscow’s crucial energy revenues. Japan is also looking to curb imports, in what could be a shift in policy from one of the world’s largest energy buyers.

US officials warned the war in Ukraine may last for weeks or even years, as Kyiv’s foreign minister pleaded for urgent military assistance while it can still make a difference. Australia said it would provide anti-armor weapons, ammunition and combat vehicles.

The United Nations General Assembly voted to suspend Russia from the Human Rights Council, the first country to be kicked off since Libya in 2011, though many countries abstained.

Australia will donate 20 Bushmaster armored combat vehicles to Ukraine following a direct request from President Volodymyr Zelenskiy for the locally made equipment. Canberra will also provide a further A$26.5 million ($19.8 million) package that includes anti-armor weapons and ammunition.

The first four vehicles, which have been refitted and repainted with the Ukrainian flag, will be dispatched from the state of Queensland to Europe on Friday, according to a statement. The blast-resistant vehicles are built to carry 10 people and can sustain themselves for up to three days.

Japan is considering curbing imports of Russian coal, signaling a potential shift of policy in one of the world’s biggest energy importers.

The Asian nation “will aim to stop importing coal from Russia” as a longer-term goal, and will over time use energy conservation, other power generation and alternative country supply to reduce its dependency on Russia, Trade Minister Koichi Hagiuda said Friday. Japan had previously drawn a line at cutting energy ties to Russia because of its heavy dependence on fuel imports.

Refugees will be integrated into Germany’s social security system and have easier access to health care, job centers and German-language courses, according to the public broadcaster. About 316,000 Ukrainian refugees are currently registered in Germany, it said.

The bloc’s fifth sanctions package, which also includes a ban on most Russian trucks and ships from entering the EU, was signed off by diplomats on Thursday, France announced. After negotiation, the phase-in period was extended to four months. Germany will make use of the transition period, Scholz said.

The EU’s executive arm told member governments that it will start work on an embargo on Russian oil, gas and nuclear fuel, according to Poland. Preparations are due to begin tomorrow, Poland’s ambassador to the EU told reporters.

The United Nations General Assembly voted to suspend Russia from the Human Rights Council, with 93 nations backing the measure and 24 opposing it. There were 58 abstentions.

It’s the first time a nation has been suspended since Libya in 2011. Ukraine’s UN envoy, Sergiy Kyslytsya, said the vote would be a defining moment for the global organization, which he has criticized for not doing enough to stop Russia’s invasion.

While Moscow was backed by longtime allies including Syria, Iran and North Korea, many nations — including Brazil, India and Mexico — said they wanted to see the results of an independent investigation into the killing of civilians before a decision on Russia’s membership was made. 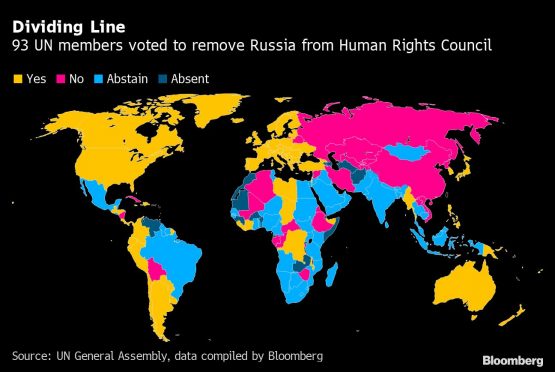 The war in Ukraine is “going to be a long slog” and a diplomatic solution isn’t an immediate possibility, General Mark Milley, chairman of the Joint Chiefs of Staff, told the US Senate Armed Services Committee.

“It’s an open question now on how this ends,” he said.

Defense Secretary Lloyd Austin acknowledged at the same hearing that guidance on intelligence-sharing hasn’t been clear and that he’s clarifying that the U.S. will share intelligence with Ukraine to conduct offensive operations in the disputed Donbas region.

Russian troops have retreated from around Kyiv and will try to seize the eastern regions of Luhansk and Donetsk, but a “re-offensive” on the capital should be expected, said Oleksandr Gruzevych, the deputy chief of staff for land forces.

Gruzevych said that while the Ukrainian army eliminated about a third of Russian troops near Kyiv, the rest were re-located across the border – with a third deployed to the east, and another third remaining in Belarus. “That is quite a powerful group,” which may be mobilised again to attack Kyiv, he said.

The war in Ukraine may last for years, according to the chief of NATO. He said foreign ministers from the alliance had agreed to step up support for the country.

Secretary General Jens Stoltenberg told reporters after the meeting in Brussels that allies need to work for a quick end to the war “but at the same time be prepared for a long haul. This war may last for weeks, but also months and possibly also for years.”

Ukrainian Foreign Minister Dmytro Kuleba said his nation needs urgent military assistance before it’s too late to make a difference in its fight against Russian forces.

“Either you help us now — and I’m speaking about days not weeks — or your help will come too late,” he said after meeting with NATO foreign ministers in Brussels. He said he will be following up on specific timelines for his country’s request for more weapons to fight Russian forces. “I have no doubts that Ukraine will have weapons necessary to fight. The question is the timeline.”

“You provide us with everything that we need and we will fight for our security, but also for your security so that President Putin will have no chance to test Article 5,” he added, referring to a provision of the NATO treaty in which countries pledge to defend all alliance members from attack.

Several European Union countries say the fifth package of sanctions against Russia is being watered down too much, according to people familiar with the matter.

EU ambassadors are meeting Thursday with the aim of approving the package, which contains a coal embargo. But Poland is resisting a change in the draft sanctions plan, sought by Germany, that extends the phase-in period for the ban by a month to four months. Poland also wants to remove all remaining exemptions to the already existing ban on the sale of weapons, as well as military-related technologies and components, to Russia, the people said.

Estonia and Finland plan to jointly rent a liquefied natural gas terminal vessel as part of an effort to lower dependence on Russian gas.

The floating storage and regasification unit would have possible berths on both sides of the Gulf of Finland, according to statements from the countries, which are connected by the Balticconnector gas pipeline. The project’s timetable is “extremely urgent,” Finland’s economy ministry said.

These will be the first commodity shipments paid for in yuan since the US and Europe penalized Russia and cut several of its banks off from the international financial system.

Hungary reiterated that it can’t back sanctions against Russia that would threaten its natural gas supplies. Despite efforts at diversification Hungary “is still heavily dependent on Russian gas,” Dora Zombori, ambassador-at-large for energy and climate, said at an industry conference in Budapest. “We cannot change this situation overnight.”

Russian Railways informed the issuer, RZD Capital Plc, that it’s applied for a license from the Office of Financial Sanctions Implementation in the UK for the purposes of facilitating payments on outstanding debt obligations issued before March 24, which “may require a number of weeks processing time,” according to a statement.

Envoys are poised to approve a ban on Russian coal that would become fully effective from mid-August, a month later than initially proposed, Reuters reported, citing a person in the EU familiar with the matter who it didn’t identify.

Shell Plc said its withdrawal from Russia will result in $4 billion to $5 billion of impairments, and warned investors that extreme energy price volatility in the first quarter could hit cash flow.

While western energy companies leaving Russia are likely to take massive financial hits, they are attempting to minimise the reputational damage of investing in Moscow-backed projects following the war on Ukraine.