Oil soared to just shy of $140 a barrel after the White House said it was considering an embargo on Russian supplies.
By Bloomberg News 7 Mar 2022  12:19 The US House is exploring a bill that would ban the import of Russian oil and energy products, a move that would add to economic pressure as more companies pull out of the country in response to Moscow’s invasion of Ukraine.

Oil soared to just shy of $140 a barrel after the White House said it was considering an embargo on Russian supplies. The Biden administration is mulling making the move on its own, if it can’t get its European allies on board initially, two people familiar with the matter said.

Chinese Foreign Minister Wang Yi on Monday defended his country’s ties with Russia, saying the discord was “sown by third parties.” Russian President Vladimir Putin reiterated over the weekend that the war will continue until Ukraine accepts his demands, dimming hopes for a negotiated settlement. Ukrainian President Volodymyr Zelenskiy reinforced his call for the international community to impose a boycott on Russian exports, including oil and petroleum products, as well as all imports into Russia.

“Let the war feed them,” Zelenskiy said in a televised address on Monday. Residents of towns near the capital Kyiv being shelled by Russia are being “held hostage,” he said. Nearly all economies are already seeing a drop in international trade tied to disruptions triggered by Russia’s war in Ukraine, according to the Kiel Institute for the World Economy.

The new report Monday from the German think tank shows Russia is being hurt the most by the sanctions — with a projected 11.8% drop in exports in February compared with a month earlier. The US saw a 3.9% decline in shipments abroad, the European Union a 2.8% fall and Germany a 3.8% slide, according to the report.

Ukraine rejected a Russian proposal overnight to evacuate people from war zones in Ukraine to Belarus and Russia, asking instead for humanitarian corridors to other areas in Ukraine.

“Our people from near Kyiv will not go to Belarus in order to fly to Russia,” Ukrainian Deputy Prime Minister Iryna Vereshchuk said in a video statement. “We demand Russia stop manipulating and abusing trust of world leaders,” she said, adding that Russia should “open routes that we have lined out.”

China Declines to Distance Itself from Russia Despite War (9:35 a.m.)

China declared ties with Russia to be “rock solid” despite Putin’s invasion of Ukraine, while repeating an earlier accusation that the US is trying to build a Pacific version of North Atlantic Treaty Organisation.

“No matter how precarious and challenging the international situation may be, China and Russia will maintain a strategic focus and steadily advance our comprehensive strategic partnership and coordination,” China’s Foreign Minister Wang Yi said Monday at his annual news briefing in Beijing.

Europe’s stock benchmark dropped almost 3% on Monday to the lowest in a year, and US index futures extended declines. Brent crude climbed more than 8%, closing in on $130 a barrel. Russia’s ruble was indicated more than 12% weaker in offshore markets at more than 138 per dollar, a record. Russia’s local markets are closed until at least Wednesday. 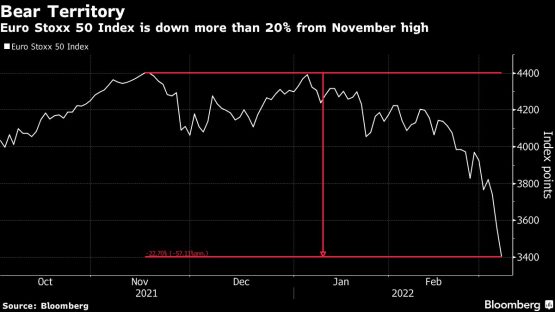 Europe may lack gas next winter if the continent decides to ban imports of the fuel from Russia, Engie CEO Catherine MacGregor said on France Inter radio Monday. Such a ban would result in “extremely high” energy prices, and volatility could disrupt markets, she said.

Governments would need to anticipate any ban with measures to curb demand, and with a ceiling on gas prices, she said. Longer term, Europe must increase its capacity to import gas from elsewhere, and accelerate its expansion in biogas and renewables, while using coal “must remain taboo as much as possible,” MacGregor said.

European gas and power futures jumped to fresh records after the US said it was mulling banning imports of Russian oil and the chief executive of French utility Engie SA warned that gas rationing could be needed in some ‘extreme’ circumstances. Dutch benchmark gas surged as much as 35% while German month-ahead power climbed 23%.

Any ban or cutoff of Russian gas flows to Europe could require “extreme” government measures to ration supplies for the industry and consumers, the head of Engie told Les Echos newspaper. Europe has enough supplies to get through this winter, problems would arise in building stocks over the summer, Catherine MacGregor said in an interview published on Monday. Gold jumped above $2,000 an ounce for the first time in more than 18 months, while copper and palladium hit all-time highs. Nickel spiked as much as 20%, while wheat slammed the daily upward limit for the sixth day in a row. Commodities already notched up a record-breaking week through to March 4, when prices of everything from energy to metals and farm products jumped 13% to a fresh record, according to the Bloomberg Commodity Spot Index.

Fast Retailing Co., Asia’s largest retailer, said all 50 of its Uniqlo stores will continue to operate in Russia. “Clothing is a necessity of life. The people of Russia have the same right to live as we do,” Chief Executive Officer Tadashi Yanai said.

His remarks run counter to moves by some of the world’s biggest brands to exit or suspend operations in Russia. Japanese carmakers Toyota Motor Corp. and Honda Motor Co. said they’re halting vehicle shipments to Russia, but Japan Tobacco Inc. continues to operate and says it is “fully committed” to complying with national and international sanctions.

Von der Leyen also said the bloc is taking steps to ensure more gas supplies. If Russian President Vladimir Putin were to halt all flows “then we are independent for this winter,” von der Leyen said. “That wasn’t the case six weeks ago.” The commission is set to unveil a new strategy this week to boost energy security, cushion the impact of soaring gas prices and accelerate the build-up of renewables.

The Biden administration is considering whether to prohibit Russian oil imports into the US without the participation of allies in Europe, at least initially, according to two people familiar with the matter.

The administration has yet to decide on a US import ban, with the timing and scope of any move still fluid, according to the people, who spoke on condition of anonymity. Administration officials have been in close contact with allies on a possible ban while also working to prepare for the domestic impact, the people said.