The government in Kyiv wants to agree with bondholders on a two-year payment freeze and changes to coupons on its so-called GDP warrants by the middle of next month.
By Volodymyr Verbyany, Priscila Azevedo Rocha and Irene García Pérez, Bloomberg 21 Jul 2022  07:28 The government in Kyiv wants to agree with bondholders on a two-year payment freeze and changes to coupons on its so-called GDP warrants by the middle of next month. It filed a formal request to restructure $22.8 billion in sovereign debt on Wednesday.

In a rare positive financial development for Ukraine, whose war-torn economy is set to shrink by a third this year, a group of governments in the Paris Club agreed to suspend the nation’s debt payments until the end of 2023 and urged other creditors to do the same. The price of the sovereign’s existing bonds ticked higher.

The Finance Ministry “received explicit indications of support” for the plan from a select group of its biggest debt holders, including BlackRock Inc., Fidelity International and Amia Capitaland Gemsstock Ltd, it said in a statement.

“Hopefully, the international community and ratings agencies also see this as a first step to a much-needed global discussion between public and private sector lenders on how best to support Ukraine,” said Simon Quijano-Evans, chief economist at Gemcorp Capital Management Ltd.

Ukrainian officials have for weeks explored debt restructuring as the country’s funding options dry up, with the war destroying industry and depleting foreign reserves. The junk-rated sovereign faces mammoth $1.4 billion foreign-debt redemption and interest payments in September, according to Finance Ministry data. 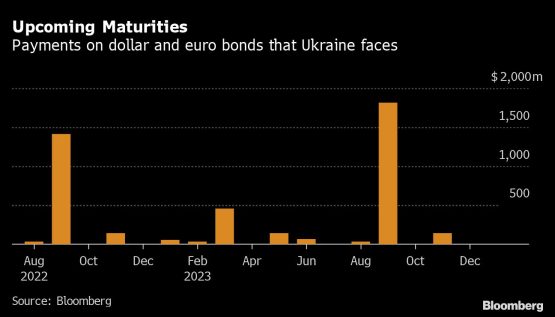 Ukraine’s consent solicitation offer covers $19.6 billion in bonds and $3.2 billion of GDP warrants. The move could save the country $5.5 billion in its eurobonds and between $750 and $800 million in the GDP warrants, depending on next year’s growth, a person familiar with the matter said.

“Given the circumstances, a term-out was inevitable,” said Viktor Szabo, a London-based money manager at Aberdeen Asset Management, who holds Ukrainian bonds. “It would make horrible PR for investors to reject the offer.”

Ukraine said that if it didn’t reach a deal with creditors, it would service and redeem its bonds and GDP warrants. But momentum appears to be building for bondholders to accept the offer.

The US, UK, France, Germany, Japan and Canada appealed to other creditors to reach an agreement with the government. The six countries will let Ukraine halt debt payments till the end of 2023.

Ukraine will need the consent of its bondholders to enact the moratorium on its external debt payments without this triggering an event of default, according to prospectuses of the sovereign Eurobonds.

Any modification to a series of notes will have to be approved by the holders of two-thirds of the aggregate principal across all debt concerned and holders of 50% for each of the issues, according to the documents. With about $25 billion of foreign debt outstanding, Ukraine’s dollar bonds due in 2033 are trading around 18 cents on the dollar, down from about 25 cents at the end of last month and more than 80 cents before Russia’s invasion in February.

“Most of these dollar bonds are already trading sub-20 cents on the dollar, effectively pricing in a debt restructuring premium,” said George Harvey, a London-based director at Icap. “Confirmation from officials that they are already engaging bond holders and not leaving them guessing is likely to support sentiment, especially given the general good will toward to the country in these challenging times.”