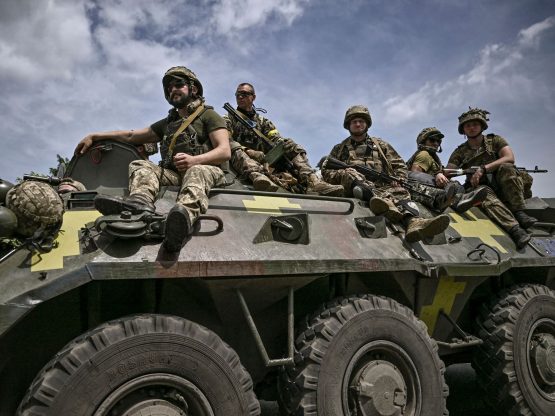 Ukrainian troops holding out in the ruins of Sievierodonetsk came under renewed heavy assault on Wednesday from Russian forces who see the capture of the industrial city as key to control of the surrounding Luhansk region.

In southern Ukraine, another major battleground in the war, authorities warned that Russian attacks on agricultural sites including warehouses were compounding a global food crisis that has stirred concerns of famine in some developing countries.

Russian forces have been focused for weeks now on seizing Sievierodonetsk, which was home to some 106,000 people before Moscow invaded Ukraine on Feb. 24, but the Luhansk region’s governor said Ukrainian forces would not surrender the city.

“Fighting is still raging and no one is going to give up the city, even if our military has to step back to stronger positions. This will not mean someone is giving up the city – no one will give up anything. But (they) may be forced to pull back,” Serhiy Gaidai told Ukrainian television.

Russian forces will further increase their shelling and bombardment of both Sievierodonetsk and its smaller twin city of Lysychansk on the west bank of the Siverskyi Donets River, he said.

Luhansk and the adjacent province of Donetsk form the Donbas, claimed by Moscow for Russian-speaking separatists who have held eastern parts of the region since 2014.

“The absolutely heroic defence of Donbas is ongoing,” Ukrainian President Volodymyr Zelenskiy said in a video statement on Tuesday.

“It is absolutely felt that the occupiers didn’t believe the resistance of our military would be so strong and now they are trying to bring in new resources towards the Donbas,” he said.

Reuters could not independently verify the situation on the ground.

Moscow says it is engaged in a “special military operation” to disarm and “denazify” its neighbour.

Ukraine and allies call this a baseless pretext for a war that has killed thousands, flattened cities and forced millions of people to flee.

Zelenskiy said Ukraine would launch next week a “Book of Executioners” to detail war crimes.

“These are concrete facts about concrete individuals guilty of concrete cruel crimes against Ukrainians,” he said.

Russia denies targeting civilians in Ukraine and rejects accusations that its forces have committed war crimes.

The conflict is having a massive impact on the world economy. Ukraine is one of the world’s biggest exporters of grain, and Western countries accuse Russia of creating a risk of global famine by shutting Ukraine’s Black Sea ports. Moscow denies blame and says Western sanctions are responsible for food shortages.

“Those who pretend to be concerned about the world food crisis are in fact attacking farmland and infrastructure sites where fires of considerable scale have broken out,” Ukraine’s southern military command said on Facebook on Wednesday.

The governor of the region that includes the port of Mykolaiv said weekend shelling had destroyed warehouses in one of Ukraine’s largest agricultural commodities terminals.

Russian Defence Minister Sergei Shoigu said the Russian-occupied Ukrainian ports of Berdyansk and Mariupol were ready to resume grain exports. Ukraine says any such shipments from territory seized by Moscow would amount to illegal looting.

The World Bank approved $1.49 billion in fresh funds to help pay wages for government and social workers in Ukraine as it and other countries deal with the damage to its economy.

More than two weeks since a siege of the southern city of Mariupol ended, TASS news agency cited a Russian law enforcement source as saying that over 1,000 Ukrainian soldiers who surrendered there have been transferred to Russia for investigation.

Russian forces turned their focus to the Donbas after failing to take the capital Kyiv in March.

Last month they were also driven back from the outskirts of Ukraine’s second city, Kharkiv. The city, near the Russian border, was hit by fresh shelling on Tuesday.

Viacheslav Shulga, an employee at a pizzeria in the north of Kharkiv that was hit, said there had been hopes the restaurant could reopen soon.

“Everything is destroyed. We are removing equipment, there will be no business here for now,” he said.

In Sloviansk, about 85 km to the west of Sievierodonetsk, women with small children lined up to collect aid while other residents carried buckets of water across the city as they prepared for advancing Russian forces.

“I am going to remain, I will not leave without my husband. He works here. That’s what we decided, we are staying,” said Irina, who did not provide her surname, as she waited with a child in a stroller outside an aid distribution centre.

Albina Petrovna, 85, described the moment her building was caught in an attack, which left her windows shattered and her balcony destroyed.

“Broken glass fell on me but God saved me, I have scratches everywhere…,” she said.