A senior US Treasury official said a proposal being explored by several of the world’s leading economies to cap the price of Russian oil exports would be crucial for preventing another global price spike to around $140 a barrel.
By Bloomberg News 12 Jul 2022  08:03 The Iranian government is preparing to provide Russia with as many as several hundred unmanned aerial vehicles including those that are weapons-capable, a top Biden administration official said.

A senior US Treasury official said a proposal being explored by several of the world’s leading economies to cap the price of Russian oil exports would be crucial for preventing another global price spike to around $140 a barrel.

Russian natural gas shipments to Europe via the Nord Stream pipeline to Germany stopped Monday for planned annual maintenance, and Western allies fear President Vladimir Putin will use the opportunity to cut off flows for good. The death toll mounted after Russian rockets hit an apartment building in Donetsk, killing at least 18 civilians, as the Kremlin’s forces were grinding their way through the region.

Ukrainian rescue workers recovered 18 bodies from the debris of the apartment block in Chasiv Yar, according to the State Emergencies Service. Russian rockets hit the five-story building near Kramatorsk in Ukraine’s eastern Donestsk region on Sunday. Ukraine sees signs of Russia preparing to renew military activity near Kramatorsk and Bakhmut as its forces continue to shell Ukrainian positions along the front line. Russian jets fired four missiles at Odesa region airspace of occupied Crimea, deputy Head of the President’s Office Kyrylo Tymoshenko said on Telegram.

A global squeeze on energy supplies that has triggered crippling shortages and sent power and fuel prices surging may get worse, according to the head of the International Energy Agency.

“The world has never witnessed such a major energy crisis in terms of its depth and its complexity,” IEA Executive Director Fatih Birol said at a global energy forum in Sydney.

The whole energy system is in turmoil following the February invasion of Ukraine by Russia, at the time the biggest oil and natural gas exporter and a major player in commodities, Birol said. 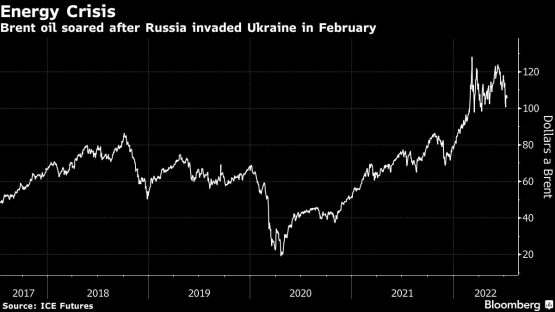 The senior official spoke to reporters in Tokyo where US Treasury Secretary Janet Yellen has begun a 10-day trip to Asia. At each stop, she’s planning to urge government officials to support the price cap plan. Group of Seven leaders agreed last week to explore the price limit plan.

Backers of the price-cap plan would like to set a limit for Russian oil just high enough to give Moscow an incentive to keep exporting. Estimates have put that in a range of $40-$60 a barrel. Closing the tap on Russian oil completely would also be economically and politically dangerous in a world beset with inflation.

National Security Advisor Jake Sullivan said during a White House briefing that US intelligence “indicates that the Iranian government is preparing to provide Russia with up to several hundred UAVs, including weapons-capable UAVs, on an expedited timeline.”

He didn’t detail the intelligence or its sources. “Our information further indicates Iran is preparing to train Russian forces to use these UAVs, with initial training sessions slated to begin as soon as early July,” Sullivan added.

“We paid the second and the last — for this year — coupon payment on Eurobonds,” he said. “This is $36 million.

EU Aims for Next Sanctions Package in Coming Weeks (5:20 p.m.)

The European Union plans to propose a new package of sanctions against Russia over its war in Ukraine in the coming weeks, according to people familiar with the matter.

Bloomberg reported earlier this month that the proposal could include restrictions on gold imports, measures to fix previous sanctions and further listings of individuals and entities.

Discussions on mechanisms to cap the price of oil are ongoing and unlikely to come in the near future, the people said. Some member states have been pushing to expand the bloc’s sanctions to hit gas, but there is little appetite among the vast majority of nations to go there.

Rinat Akhmetov exited his media businesses, including several influential TV channels, as he seeks to comply with legislation pushed by Zelenskiy before Russia’s invasion that treats businessmen as “oligarchs” if they meet criteria such as having influence on media.

To avoid being treated as an oligarch, Akhmetov ended up transferring his media licenses to the state because difficulties with market transactions due to the short period given under the law to reduce media holdings, as well as the effects of the war, his company said in an emailed statement.

The support, expressed by State Department spokesman Ned Price, gives a diplomatic boost to Prime Minster Justin Trudeau. His government has come under withering criticism from Ukraine and its large diaspora in Canada for agreeing to ship back gear that had been stranded in Montreal since fresh sanctions were imposed last month.

Putin and Turkish leader Recep Tayyip Erdogan spoke by phone ahead of a summit, which may take place “soon,” the Kremlin said in an emailed statement. They discussed measures to increase trade volumes and payments in national currencies, as well as continued uninterrupted supply of Russian energy.

The leaders exchanged “opinions on situation around Ukraine, including in the context of coordinating efforts to ensure safety of shipping in the Black Sea and grain exports to global markets,” according to the Russian statement.

Ukraine said it can use an additional route tapping ports on the Danube River to move exports after Russian forces withdrew from Snake Island in the Black Sea, a strategic position that had helped Moscow block the country’s shipments.

Russia’s current account surplus hit a record of $70.1 billion in the second quarter of the year, as surging revenues from energy and commodity exports helped offset the impact of US and European sanctions.

Grain crops are being destroyed in the southern Mykolayiv and Odesa regions of Ukraine as Russian shells hitting the fields ignite fires, Natalia Humeniuk, a spokeswoman for the military’s southern command, said during a video briefing.

“Their main aim is to destroy everything which they can’t capture and appropriate immediately,” she said, adding that grain depots and elevators are also being targeted. She didn’t elaborate on the size of fields being destroyed as result of attacks.

Do you see? There is some method to this madness.

The US will stop at nothing to maintain this cozy self enriching system.

This is why the world needs counter balances.