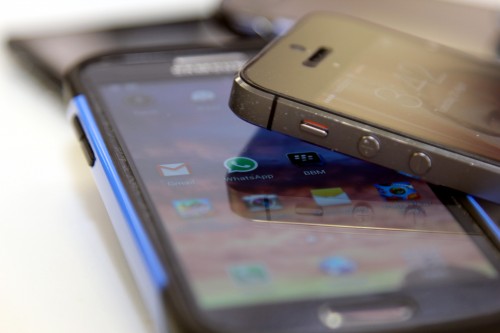 Two men were charged on Monday with helping to run a so-called “cramming” scheme in which they earned tens of millions of dollars by charging unsuspecting mobile phone users for unwanted text messages.

Darcy Wedd and Erdolo Eromo were expected to appear in federal court in New York and Los Angeles, respectively, later on Monday.

The charges were brought by the office of US Attorney Preet Bharara in New York, which previously charged six other men in May in connection with the scheme.

In 2013, the US Federal Trade Commission settled related civil charges with one of the six men,Lin Miao, and several corporate entities, taking more than $10 million in assets including a Beverly Hills, California, home and luxury cars.

Michael Proctor, a lawyer for Eromo, said, “We are disappointed in this decision by the United States Attorney’s office, we disagree with it, and we will do our talking in court.”

Wedd’s defense lawyer in New York could not immediately be reached for comment.

From 2011 to 2013, the defendants arranged for thousands of mobile numbers to be “auto-subscribed” to text messages containing horoscopes, celebrity gossip or trivia for $9.99 a month, prosecutors said.

Customers typically ignored or deleted the messages and did not notice the monthly charge on their bills, according to the indictment.

Wedd and Eromo were executives at a mobile aggregator, which functions as a middleman between text message companies and mobile carriers by aggregating monthly charges onto customer bills, prosecutors said.

In 2011, Wedd, who was chief executive, noticed the unauthorized charges and raised the issue with Miao, according to the indictment.

Wedd agreed to help perpetuate the scheme in exchange for $100,000 and a percentage of the proceeds, the indictment said. Eromo also met with Miao and agreed to participate for regular payments, according to the indictment.

Wedd and Eromo face charges of wire fraud and conspiracy to commit fraud and money laundering.

In a statement, Bharara said, “Although the text messages were often trivial, what the defendants allegedly did was far from a joking matter. Their criminal scheme allegedly fleeced hundreds of thousands of everyday customers from around the country out of millions of dollars.”

Miao, Yong Jason Lee, Michael Pajaczkowski and Christopher Goff were all previously arrested in May. Two other defendants, Michael Pearse and Yongchao Liu, live in Australia and are not in US custody.