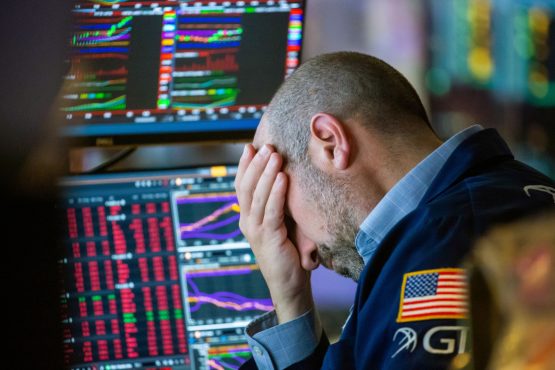 A selloff in stocks moderated on Tuesday as traders assessed risks from China’s crackdown on the real-estate sector and looked ahead to this week’s Federal Reserve meeting. Treasury yields edged up.

The Stoxx Europe 600 index advanced 0.6% at the open, rebounding from the biggest drop in two months.  US futures gained, suggesting some improvement in sentiment. Dip-buyers in the last hour of trading helped the S&P 500 pare some losses Monday, though the index still posted the biggest drop since May.

A Hong Kong gauge of real-estate firms steadied, after developers disputed a report of pressure from the Chinese government. China Evergrande Group slid deeper in equity and credit markets. Concerns remain about broader contagion after S&P Global Ratings said the developer is on the brink of default. China’s markets reopen on Wednesday after holidays.

Treasuries pared an advance and the dollar was steady. Aside from worries over Evergrande’s ability to make good on $300 billion of liabilities, Wednesday’s Federal Reserve meeting also looms. Policy makers are expected to start laying the groundwork for paring stimulus. China’s property-sector upheaval — part of President Xi Jinping’s broader clampdown on private industries under his “common prosperity” initiative to reduce inequality — is adding to the risks confronting investors. These include stretched equity valuations and slower economic reopening due to the delta virus strain amid price pressures stoked by commodities. Markets are also digesting an outlook of reduced central bank policy support.

“Markets are clearly having some angst on the potential spillover effects from Evergrande, along with some nervousness over the September FOMC meeting,” said Cliff Hodge, chief investment officer at Cornerstone Wealth. “We’ve been in the camp that we’re overdue for a correction, something in the 5%-10% range that is a buyable pullback. At the moment, we’re not worried about a market crash. The Fed and Evergrande are not new.”

Elsewhere, Bitcoin slid for a third day in volatile trading, tumbling as much as 7.6% before bouncing back to above $42 000.

In Canada, Prime Minister Justin Trudeau won a third term in a snap election but fell short of regaining a parliamentary majority. The nation’s currency was among the best performers in the Group-of-10 basket.