US recession is avoidable if Fed can ‘thread the needle’

Biden on Friday touted the latest sign of strength in the jobs market even as he acknowledged it’s likely to be overshadowed in American minds by the pain of sky-high inflation.
By Rich Miller, Bloomberg 6 Jun 2022  07:10 To hear some of the chatter in financial markets and corporate America’s C-suites, a US recession is imminent and inevitable.

While the danger of a downturn has risen as growth has slowed, most economists argue a contraction is unlikely in the immediate future, given the continued strength of the jobs market and the more than $2 trillion in excess cash on household balance sheets.

But even then, an economic decline isn’t a slam dunk. Ex-Fed official and Deutsche Bank AG economist Peter Hooper was among the first to forecast a recession, and puts the odds of one happening next year at 70%-plus. Yet he says he can still see some scenarios for avoiding one. 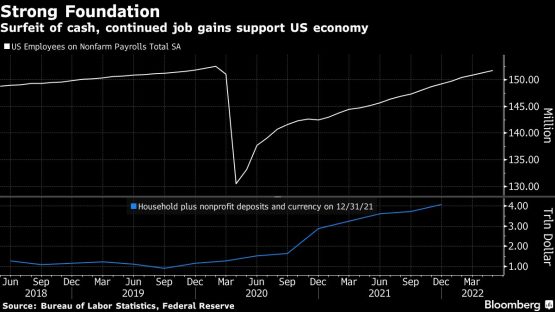 That would, to use the words of Treasury Secretary Janet Yellen, take luck and skill on the part of the Fed as it seeks to rein in surging prices. Success will also depend on forces beyond the central bank’s control — a point Fed Chair Jerome Powell himself has made, amid supply-chain shocks caused by the pandemic and Russia’s Ukraine war.

Based on the critical assumption that the worst economic effects of Covid-19 and the war are behind, Moody’s Analytics chief economist Mark Zandi is betting the Fed can pull it off.

“I still think we’re going to navigate through without a recession. But obviously it’s going to be very, very tight because risks are very high,” he said.

A lot is at stake. A recession would likely throw hundreds of thousands of Americans out of work and trigger another big downdraft in the stock market. It would also spell further trouble for President Joe Biden, whose Democrats are already on the back foot in defending thin congressional majorities in November’s midterm vote.

Biden on Friday touted the latest sign of strength in the jobs market even as he acknowledged it’s likely to be overshadowed in American minds by the pain of sky-high inflation.

Cracks are starting to show in an economy that’s coming off a growth rate that last year reached the highest since 1984. The housing market is buckling under the impact of a big jump in mortgage rates engineered by the Fed, with new home sales plummeting in April by the most in nearly nine years.

Technology companies that prospered during the height of the pandemic are retrenching and cutting staff. And retailers like Walmart Inc. and Target Corp. are trimming their earnings forecasts as they struggle with surging costs.

That’s set off alarm bells on Wall Street. The Nasdaq composite stock index has slumped into a bear market, while corporate bond spreads have widened to reflect a growing risk of recession. 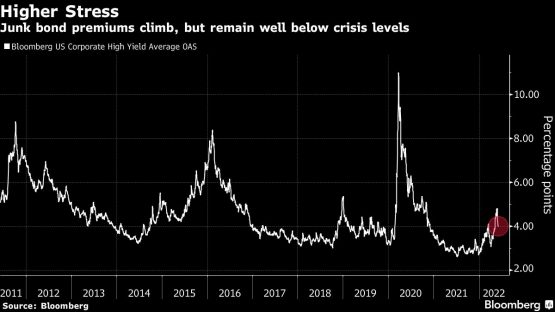 Some corporate chieftains are working the worry beads too. Bigwigs from JPMorgan Chase & Co. Chief Executive Officer Jamie Dimon and billionaire entrepreneur Elon Musk to Gary Friedman, the head of furniture retailer RH, voiced wariness this week about the possibility of a downturn.

In a tweet on Friday, Goldman Sachs Group Inc. senior chairman Lloyd Blankfein suggested that some of the gloom was overdone. “Dial back a bit the negativity on the economic outlook.” the former Goldman CEO said. While these are “riskier times,” the economy “may yet land softly.”

Megan Greene, global chief economist at the Kroll Institute, said recession concerns are premature. Consumers, the bulwark of the economy, still have a lot of financial firepower built up from earlier in the pandemic, when they were cooped up at home and showered with stimulus checks from the federal government.

And while the real estate market is turning, many are still benefiting from appreciated property valuations. Adding to collective consumer firepower is the rising number of employed people across the economy, with the May jobs report showing a 390 000 gain in payrolls and an unemployment rate holding close to a half-century low.

“Strong household and corporate balance sheets will keep growth positive for the next 12 months. Looking further out to late 2023, our model shows the risks of recession are elevated. A soft landing isn’t impossible. It’s tough to make it the base case.”

That’s all enabling consumers to keep on spending in the face of higher prices for food, gasoline and other necessities. After stripping out inflation, growth in consumer outlays actually accelerated in April, data showed May 27.

“Consumers are in good shape,” Bank of America Corp. CEO Brian Moynihan told Bloomberg Television on May 24. “What’s going to slow them down? Nothing right now.”

But inflation will continue to eat away at households’ nest eggs, making next year’s outlook more fraught.

“I don’t think we’re going into recession in the next 12 months,” Greene said. “It’s the 12 months after that, that I’m worried about.”

The fate of the economy in 2023 ultimately will depend on what happens with inflation and how high the Fed will have to raise interest rates to reduce it to acceptable levels. The Fed’s favorite inflation measure rose an annual 6.3% in April, more than triple the central bank’s 2% target.

Deutsche Bank’s Hooper says the Fed may need to push short-term interest rates as high as 5% to wring inflation out of the economy. That would be the highest since 2007 and well above the Fed’s current 0.75% to 1% target range.

“In order to relieve the inflation pressure in the labor market you’re going to have to see the unemployment rate rise,” Hooper said, sticking to his bet on a recession.

Oxford Economics chief US economist Kathy Bostjancic takes the other side of that trade. She puts recession chances at 35%, arguing that an unwinding of supply-chain strains and an influx of workers into the labor force will help alleviate inflationary pressures without requiring economy-breaking Fed tightening.

Another plus for the Fed: Investors, consumers and businesses seem convinced that, in time, it can get inflation under control, surveys and bond-market indicators show. That means policy makers might not require a “punishing recession” to squeeze inflationary psychology out of the economy, JPMorgan chief US economist Michael Feroli said.

It doesn’t mean the Fed’s task will be easy. Feroli sees growth slowing to a mere 1% in the second half of 2023 as tighter monetary policy ripples through the economy.

“The Fed has to thread the needle to keep growth subpar but still positive,” he said. “We can avoid a recession, but we definitely have an elevated risk of one.”