Spending by shoppers, drinkers and diners is vital to Britain’s effort to emerge from its deepest recession for three centuries.
By Deirdre Hipwell, Richard Vines and Manas Pratap Singh, Bloomberg 30 Aug 2020  00:53 Spending by shoppers, drinkers and diners is vital to Britain’s effort to emerge from its deepest recession for three centuries.

News last week that retail sales rebounded by more than forecast in July stood out against a backdrop of unprecedented job cuts at Marks & Spencer, a report that consumer confidence remains in the doldrums and the prospect of more local lockdowns after a spike in infections.

The UK economy relies on consumer spending more than most other countries in Europe, accounting for 63% of output compared with around half in Germany and France. The retail industry has been open for almost two months in much of the UK following a lockdown imposed in March, following similar reopenings across the continent. But people in Britain seem to be venturing back out to stores, restaurants and bars more slowly. Businesses that make up the backbone of the economy are struggling to navigate the next stage of the pandemic, based on interviews with people running supermarkets, restaurants, a hair salon and a clothing store.

Government rescue programs have kept many companies on life support during the pandemic, though many are now coming to an end. Pub chain JD Wetherspoon Plc said on Monday revenue was rising only because of subsidies for eating out. Businesses are having to quickly reduce costs and prepare for a potentially prolonged period of fragile consumer sentiment.

The pandemic is also accelerating structural changes in the way consumers behave with more people eating at home and shopping online. Supermarket chain Tesco is planning to create permanent roles for 16,000 new workers in its internet business. However, retail employment overall fell at the fastest rate since 2009 as sales declined in the year to August, with worse anticipated, according to the Confederation of British Industry.

The next step in the road to some semblance of normality is getting children back to school, a critical plank in the revival because it would allow more parents to return to work and potentially repopulate city centers. 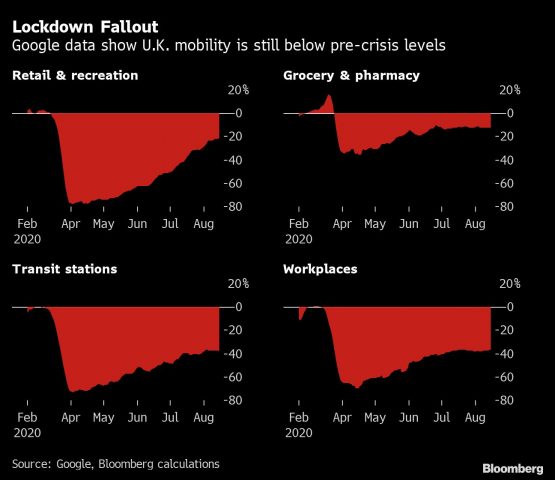 There is not “much momentum to get excited over,” Katie Cousins, an analyst at Shore Capital, said after the Office for National Statistics reported a 2% increase in retail sales in July from June. “The country remains in a fragile economic state and we see further struggles ahead. Both businesses and consumers are continuing to feel worried.”

The following is a snapshot of the concerns over consumer spending.

Asda, Britain’s third largest grocer, tracks family spending power and its latest figures show it decreased by 2.2% in the year to June, the steepest fall in seven years. Rob McWilliam, chief financial officer at the Walmart-owned supermarket chain, said that a survey of its customers revealed that half of them expect their household income to decline in the next 12 months.

“I don’t want to be part of talking the country down, but it is really clear we have got a tough few months ahead of us,” said McWilliam.

Pied-a-Terre, a Michelin-starred French restaurant in central London, won’t reopen until September because of the dearth of office workers, according to founder David Moore.

He is downbeat about the prospects, at least in the short-term, and expects a loss for the first few months after reopening. A building project to open up the front of the restaurant and give it a better profile on the street was due to take place this summer and has now been put on hold as the business focuses on preserving cash.

Pre-coronavirus, Pied-a-Terre would normally have between 45 and 55 daily covers during the early part of the week rising to more than 60 on a Saturday. Without tourism the restaurant will likely only get less than half that number when it opens its doors again. Moore said it may take until Valentine’s Day in February before consumers start returning to London in bigger numbers and dining out again.

“There will be a lot of empty restaurants in London all competing for the same people,” he said. “It is going to be a long, slow grind to get back to normal.” Selin Kiazim believes the world of hospitality could be changed forever as more people work and eat at home. The chef and her business partner, Laura Christie, opened Oklava Bakery + Wine in the Fitzrovia district of London eight weeks before the lockdown. They decided to shut it and focus on their flagship Oklava restaurant in Shoreditch.

Footfall has plummeted because “people are not traveling into central London,” she said. Sales at the restaurant have been boosted by the UK government’s “Eat Out to Help Out” subsidised meal program.

They have a lot riding on the recovery. Kiazim and Christie gave personal guarantees on the lease, meaning they will be liable to pay the rent even if the restaurant fails.

“If we aren’t able to work out a deal with our landlord that would fall on our heads,” she said. “And there will be a good amount of people in the same position, whether with leases or bank loans or suppliers.”

At clothing boutique Revival Retro in central London, founder Rowena Howie’s business is also suffering from a lack of people passing through the metropolis. She is now reopening her store, but only from Thursday to Saturday with the other days available for private appointments.

“Central London has just been a ghost town,” said Howie. “A few more people are starting to come back, but it is nowhere near previous levels.”

She has used government aid to help the business survive and is also scaling back, such as abandoning plans to start selling her range of clothing through other small fashion retailers. The other issue she faces is whether her UK manufacturing supply chain will be able to fulfill her order for the upcoming season given all the disruption.

Brooke Evans opened her own hairdressing salon in Telford, central England, in December. Within a couple of months the building was badly damaged when the area was ravaged by floods, but she managed to reopen. Then Covid-19 struck.

Since the salon restarted, it has been fully booked, but Telford is now at risk of a local lockdown after a sharp rise in new coronavirus infections. “A second lockdown is really worrying because since we reopened it has been really positive,” said Evans, 26.

Evans has two members of staff—a part-time barber and a full-time graduate stylist—whose salaries have been supported by the UK government’s furlough program. As that begins to wind down in September, Evans has decided she has to let her graduate stylist go at the end of the month.

The next concern is if she has to rearrange her schedule should the salon have to temporarily close again. However, she said she would just come in on Sundays and work longer days. “We purchased our building last year and did a big renovation,” said Evans. “Not surviving is not an option for me. I have to just get on with it.” Israel Ruiz worked at a London coffee chain to supplement his income as an actor for the past seven years and went on furlough in March. He’s since lost his job. He already canceled his memberships for the gym and swimming pool and is looking at other cuts. He was able to eat out thanks to the government program, though that’s set to end.

“I would love to spend as much as I used to before the pandemic, but now it is all about saving every single penny,” said Ruiz, 46, a Spaniard who lives with a friend who also got fired this week from the coffee shop. “Being an actor for 20 years I am used to some instability. But those with families and mortgages, I can’t even think what they are going through.”

Years, even decades, of transformation in a few months in the way people work. Employers realise that employees are more productive at home, while employees realise that appearing at a set time in a noisy germ-incubating cubicle farm, and suffering through a commute are not necessary for getting things done. The long term consequences could be disruptive (or an opportunity for countries like SA), since there is little difference between a remote worker 20km away, and one 10 000km away.

If I was running a food business that relied on office worker footfall, I’d probably be focusing on home delivery and takeaway in suburbs where workers live, or switching to family dining in a post-covid world. Other retailers will have to do similar, or move online.

You ain’t seen nothing yet. Wait till Brexit actually happens.

We still have to see our impact if borders stay closed. Especially WCape is going to have a nightmare summer without the swallows.

Wine consumption will flip to home consumption. That 0% driving rule will not help restaurants either

The UK is currently a disaster. Really sad.