Threatens to reverse a surge in underwriting fees for US investment banks like Goldman Sachs Group Inc., Bank of America Corp. and Morgan Stanley.
By Drew Singer, Bloomberg 28 Jul 2021  07:45 Companies based in China have been the most prolific foreign issuers of equity in New York during the pandemic. But the budding $50 billion flow of US initial public offerings and secondary stock sales is at risk after new regulatory scrutiny surrounding cybersecurity firms.

“China’s increased oversight of overseas listings by Chinese companies, announced by the State Council on July 6, could halt unicorn listings in 2H in Hong Kong and the US,” Bloomberg Intelligence analyst Sharnie Wong wrote in a note. “Their combined share of Chinese IPOs may drop to less than 40% of deal value in 2H from 55% in 1H, assuming deal value halves sequentially.”

Investment banks have raised $49.2 billion in US stock offerings over the past year for companies based in China and their largest holders, a 452% increase from the previous 12 months. That includes more than $23 billion in IPOs and another $26 billion through secondary offerings.

The heavier deal flow has provided an uptick in fees to the banks. For example, Didi Global Inc.’s $4.4 billion IPO alone generated $89 million in fees for a syndicate that included Goldman, Morgan Stanley and JPMorgan Chase & Co. among other US underwriters.

Some banks are more exposed than others. Over the past year, Goldman has led all banks with a 17% share of this market, according to data compiled by Bloomberg, with BofA and Morgan Stanley also in the top three. Of course, this is a drop in the bucket: Goldman made about $311 million in fees from these deals, compared to $55.6 billion in net revenue for the 12 months to June 30.

Goldman Sachs declined to comment. Representatives for Bank of America and Morgan Stanley didn’t immediately return a request for comment. 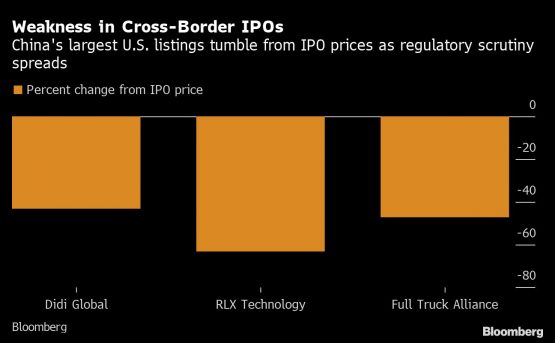 While the past year’s momentum might be in jeopardy, a strong pipeline of of Chinese companies should continue to advance US listing plans. That’s according to Pruksa Iamthongthong, the senior investment director of Asian equities for Aberdeen Standard Investments.

“For a mainland company, the key considerations would be whether the U.S. remains an attractive IPO destination, given its market depth and breadth, and whether a listing closer to home in Hong Kong might be a better alternative,” she said.

The Hong Kong market could prove to be less of a geopolitical risk than New York for companies looking to go public outside of mainland China, Iamthongthong added.

Since Didi debuted on June 30, no Chinese company has successfully priced a US IPO with proceeds of more than $22 million. Eight of the last ten cross-border listings from China are trading below their IPO price, a sign of how hard IPOs have gotten hit by the growth in regulatory pressure.

The latest deal that appears to be stung by the crackdown and ensuing selloff is Hello Inc. The Shanghai software maker withdrew its US listing on Tuesday, the day it was expected to debut. But some of these deals could still get done. And if they shift to Hong Kong, the Western banks will still benefit — although with lower fees.

After companies go public, particularly from the technology sector that’s been the focus of China’s crackdown, they are often seen as candidates for secondary offerings. This has traditionally promised more fees for US underwriters.

The largest China-US secondary offering of the past year, a $4.2 billion offering in Pinduoduo Inc., brought in $47 million in fees that were paid almost entirely to just Goldman and BofA, according to data compiled by Bloomberg.

Equity capital markets is just the start. The regulatory crackdown has also reduced the use of debt to fund overseas M&A to a seven-year low as the White House pushes Wall Street to more broadly reconsider its presence in China and Hong Kong.