The surging cost of commodities to industries and households is a threat to China’s economic growth.
By Bloomberg News 12 May 2021  08:05 The surging cost of commodities to industries and households is a threat to China’s economic growth and the purchasing power of its citizenry.

As prices soar for everything from the copper and steel used in construction, to the coal that heats homes and powers factories, to the corn that feeds animals, what can Beijing do to control the record-breaking rally?

The answer is complicated by several factors, including policies on pollution and imports that have only served to exacerbate supply constraints. Beijing has imposed output curbs on metals like steel and aluminum to reduce emissions as part of President Xi Jinping’s commitment to deliver a carbon neutral economy by 2060. And it has cut purchases of coal and other commodities like copper from major supplier Australia as relations between the two nations have soured.

Moreover, the world’s biggest consumer of commodities is being forced to compete for materials just as global economies bounce back from the pandemic, driven by massive government stimulus, particularly in the US. The goal is to cool speculative flows that can draw in waves of investment and generate dizzying price spikes. The trouble is that this approach doesn’t necessarily help to manage a physical market with its own momentum. Steel prices are rallying worldwide without having a really significant futures market, for example. Still, iron ore futures in Dalian dropped slightly on Tuesday, while rebar and hot-rolled coil in Shanghai marched to new highs ahead of the new restrictions. Thermal coal also forged a fresh record.

China is able to lean on its vast state sector to ease shortages, an effort that has recently met with only mixed results at best. Last month, the top economic planning agency told coal miners to produce at their maximum winter output levels, which has barely put a dent in the market’s subsequent rise to all-time highs. For gas, unusually cold winter weather led to an official dressing down for importers following their inability to meet demand, which seems to have motivated some to bring forward their purchases for this year. The efforts to boost energy supplies have been upset by diplomatic tensions with Canberra. China has banned Australian coal imports, one of a number of restrictions on a swathe of goods from barley to wine. And at least two of China’s smaller gas importers have been told to avoid purchasing additional gas from Australia for delivery over the next year.

China has considered selling about 500 000 tons of aluminum from its state reserves to cool the market. Prices plunged initially on the plan before rising again to their highest level in a decade. China’s output of the lightweight metal was 37 million tons last year, more than half the world’s total. The nation holds stockpiles of materials like copper to foodstuffs like soybeans, as well as massive crude oil reserves, but the amounts are undisclosed. Any indication that the reserves bureau is a buyer or seller has the potential to dramatically move markets. The longer-term plan might include adding more base metals to strategic reserves to ensure domestic supply and cushion potential shortfalls, although any state-purchasing program now would risk adding fuel to the current rally.

China is building up its agricultural buffer as well. The government has bought huge amounts of US corn for state reserves and may release them to quell any price spikes ahead of the domestic harvest in the fourth quarter. Authorities have also imposed curbs on state wheat sales amid concern that increased purchases by feed mills to replace expensive corn could push up prices of the new wheat crop, which will be reaped in June. 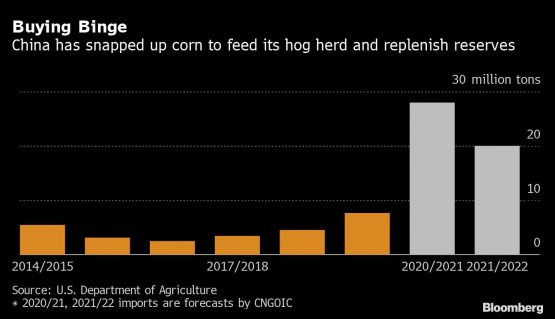 Beijing is also replenishing its soy reserves, adding locally grown soybeans for the first time since 2017 to curb any possible food inflation. The domestic crop isn’t genetically modified and is used for foods such as tofu rather than animal feed. China has also frequently released pork reserves to cool rising prices of the nation’s most widely consumed meat.

To rescue an economy that had cratered because of the pandemic, China reached for its usual play book: massive state-funded construction to stimulate demand and an expansion in credit that fed through into the real estate market. That helped put a rocket under the price of steel and other building materials like copper and aluminum. China has trimmed this year’s quota for the debt sales that typically fund infrastructure, and local governments have been slow off the mark in terms of new issuance. Metals traders will be looking for further evidence that fiscal policy is tightening as the government shifts its focus to preventing asset bubbles.

The broadest concern is that record commodities prices will fuel inflation globally and central banks will act too slowly to stem the tide. Last month saw the fastest growth in Chinese factory-gate prices since October 2017, a surge that’s likely to have furrowed brows at the People’s Bank Of China. All of China’s financial markets are on tenterhooks for any indication that the PBOC will accelerate monetary tightening as the nation completes its recovery from the pandemic. For metals, tougher lending requirements would affect demand across sectors, from real estate to autos and consumer goods. Still, Bloomberg Economics doesn’t think the central bank will be motivated to act quite yet, as consumer prices remain relatively subdued.

Before they get their knickers in a knot, they should take a look at the price of iron ore in terms of the only stable currency, namely gold. The US money supply jumped by 40% over the last 12 months. That is 40% more dollars chasing the same stuff. The commodity price in dollars does not say much. The price in terms of gold matters because the supply of gold is limited.

I do not understand the sell off in resource today if the metal pricess are all mostly double or triple the price compared to two years ago.

Plus even if the metal prices drop 30%, the cash is in the bank.

The US enabled China to feed the greediest. Now China must be denigrated for not letting them take control in return.
How about including the rest of the planet in these supply side and very deliberate deliberations. The rest still has a role to play in actual reality, if not in the deliberate fixation. Not on the money-power-hegemony hymn sheet? Understood. Sheesh! so cronic.

(South)Africa hates all the ”Colonial” powers that be, but methinks they are a bit confused, right now!

The Chinese advocated that its current minerals-intensive industrialisation phase will be concluded soon.

The ”bee in my Colonial bonnet” stems from the double African standards with regards to all Colonial rulers – past and present! China seems to be OK, but why? Africa’s resources have been a tempting target for adventurers, kings, traders, governments and companies for centuries.

Chinese control over global mine production is approximately 3% of the total value.
Who controls a mining company in Africa? Is it its owners, its management, its lenders? These questions have attracted the interest of economists and other scientists for almost a hundred.

Control can be exercised in many ways of which ownership is the most basic and direct one. Other ways of exercising control over a company include, for example, through administrative and technical management, interlocking directorates, long-term contracts, market knowledge, proprietary technology, infrastructure, financing and vertical integration.

The importance of these different ways of controlling a company varies considerably between branches of industry and from time to time within the same branch.

I am starting to believe that all the hype of China wanting to take over the world economy is a form of cronyism.

The more China expands the closer it is to breaking up, the same happened to the Romans, Germans and the Soviet union.

Perhaps it is the greed plan setup by the west for China.