What is the ‘social cost of carbon’? 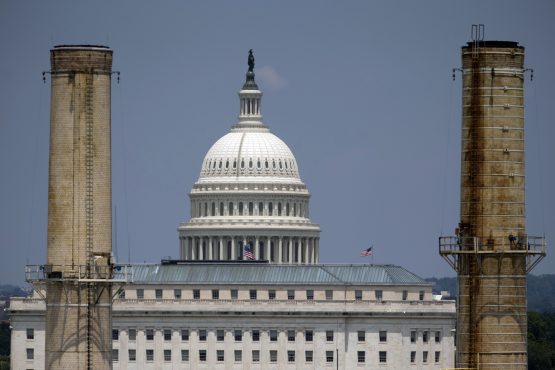 When a power plant runs on coal or natural gas, the greenhouse gases it releases cause harm – but the power company isn’t paying for the damage.

Instead, the costs show up in the billions of tax dollars spent each year to deal with the effects of climate change, such as fighting wildfires and protecting communities from floods, and in rising insurance costs.

This damage is what economists call a “negative externality.” It is a cost to society, including to future generations, that is not covered by the price people pay for fossil fuels and other activities that emit greenhouse gases, like agriculture.

To try to account for some of the damage, federal policymakers use what’s known as a “social cost of carbon.”

A tug-of-war over the social cost

The social cost of carbon, a dollar figure per ton of carbon dioxide released, is factored into the costs and benefits of proposed regulations and purchasing decisions, such as whether the Postal Service should buy electric- or gasoline-powered trucks, or where to set emissions standards for coal-fired power plants.

That extra social cost can tip the scales for whether a regulation’s costs appear to outweigh its benefits.

The Trump administration slashed the social cost to between $1 and $7 per metric ton of carbon dioxide – low enough that the administration could justify rolling back EPA regulations on power plant emissions and vehicle fuel efficiency.

The Biden administration temporarily raised it to $51, close to its pre-Trump level, and has been preparing to finalize a new social cost that might encourage regulators to push for emissions cuts in everything from agriculture to transportation to manufacturing.

What social cost means for you

One of Joe Biden’s first actions as president was to reverse the Trump administration’s bargain-basement accounting of the “social cost.” The Biden administration returned it to the Obama-era level, adjusted for inflation, by setting an interim social cost at $51 per metric ton of carbon dioxide that would rise over time.

If that were a carbon tax paid by consumers, it would raise gasoline by about 50 cents per gallon.

But the social cost of carbon has no direct effect on the price of gasoline, electricity, or emissions-intensive goods like steel. Instead, it influences purchasing and investments by the government, and indirectly, by private companies and consumers.

A higher social cost of carbon signals to companies that the government sees big benefits to cutting greenhouse gas emissions. Figuring in damage from emissions also helps it justify investments in green technology.

For instance, the U.S. Postal Service has asked Congress to approve $11.3 billion for a new fleet of gasoline-powered mail delivery trucks. Those vehicles would burn through 110 million gallons of gasoline a year. At $51 per ton of emitted carbon, that purchase implies a social cost of $1.1 billion over 20 years. Incorporating such costs might push the government to consider including electric vehicles in the future postal service fleet.

Currently, economists calculate the social cost by using integrated assessment models that bring together long-term projections for population, economic growth and greenhouse gas emissions. These models use emissions scenarios to estimate future climate change, and then calculate the effects on the country’s – and the world’s – GDP, and they can vary widely depending on the assumptions used.

For example, damage estimates for 2100 produced by the three models currently used in the government’s cost-setting process range from $80 to $290 per ton. The Biden administration set the interim social cost to rise to $85 by 2050 to account for greater impact of climate change over time.

Using models to produce such estimates have become a routine part of policymaking, but they are also massively uncertain.

Why Trump’s social cost was so much lower

The Trump administration’s estimate was lower for two reasons: It accounted for climate damage only within U.S. borders; and the administration placed a lower value on future costs by setting a discount rate of 7%, more than double the 3% used by Obama and Biden. Economists use different rates to “discount” future benefits versus the cost we pay today to get there. A high discount rate on climate means we put a lower value on damages that occur in the future.

Unsurprisingly, discount rates are contentious. New York state uses a 2% discount rate to produce its current social cost of carbon of $125 per ton. Some analysts argue for a 0% discount rate because anything higher places a lower value on costs borne by future generations.

Several Republican state attorneys general sued to try to block Biden’s interim increase, and a federal judge in Louisiana agreed with their argument that global damages could not be considered in social costs tailored for U.S. regulations. The judge issued an injunction blocking Biden’s interim increase, but an appeals court , allowing the higher social cost of carbon to again be used while the ruling was appealed. The U.S. Supreme Court in May 2022 declined to lift the stay. A similar lawsuit in Missouri was dismissed.

Some scholars debate whether a social cost of carbon should be used at all.

The United Kingdom uses a “cost effectiveness analysis” instead to determine the value of carbon removal. That method uses a target – net-zero emissions – and calculates the cheapest route to get there. Some prominent scholars are recommending the U.S. adopt the U.K. approach, while others object.

There are other ways to account for the costs of climate change.

A carbon tax is more straightforward and effective, but tougher to enact because it requires Congress to act. Such a tax would dissuade people from burning fossil fuels by taxing them for the damage those emissions cause – the negative externality.

Another form of carbon pricing uses a marketplace for companies to trade a declining number of emissions permits. Such cap-and-trade programs are in place today in the European Union, a few U.S. states, including California and Washington, and elsewhere.

Taxes and emissions caps would reduce carbon emissions, but they are unpopular with voters and Congress because they raise prices. A social cost of carbon is easier both to enact and to modify through regulatory review, without legislation. It allows the government the flexibility to address climate through routine policymaking – but can also be changed by subsequent administrations.