Millions of tons of grain are stuck in Ukraine after Russia’s invasion blocked its major ports.
By James Poole, Bloomberg 25 Jul 2022  08:30 Wheat prices jumped after Russia attacked the sea port of Odesa with cruise missiles at the weekend, just hours after signing a deal to unblock grain exports from Ukraine, a move that was hailed as a vital step toward alleviating the global food crisis.

Futures in Chicago surged as much as 4.6%, before paring gains to trade 3% higher at $7.82 a bushel by 11:20 a.m. in Singapore. Prices slumped almost 6% on Friday to close at the lowest level since early February after the agreement was reached to allow shipments from three Black Sea ports including Odesa.

Millions of tons of grain are stuck in Ukraine after Russia’s invasion blocked its major ports. While a small volume has been rerouted by road and rail, major customers in the Middle East and North Africa have been forced to look elsewhere for supplies, pushing up prices and worsening food insecurity. 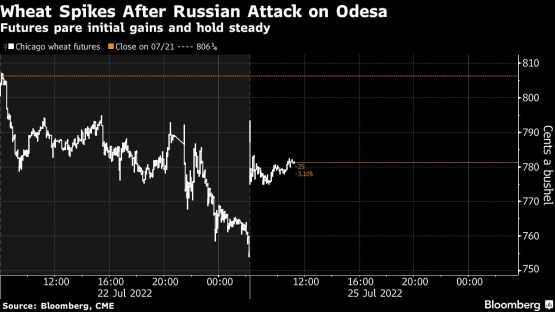 The Russian missile attack is “poor form considering the importance of this agreement, and reiterates the fears that an agreement with Russia isn’t worth the paper that it is written on,” according to Andrew Whitelaw, a grains analyst at Melbourne-based Thomas Elder Markets.

There were nine ships at Odesa sea port, including four loaded with corn worth $45.6 million, a person familiar with the matter told Bloomberg News. The grain ships were under the flags of Malta, Liberia, Sierra Leone and Panama, said the person, who asked not to be identified discussing private information.

The parties to the agreement committed not to undertake attacks against merchant vessels or port infrastructure engaged in the initiative, according to a copy of the document signed by Ukraine posted on Facebook by Andriy Sybiha, deputy chief of staff to Ukrainian President Volodymyr Zelenskiy.

Natalia Humeniuk, a spokeswoman for the Ukrainian military’s southern command, said on TV the missiles didn’t hit grain storage at the port.

Moscow broke its silence on Sunday, when Maria Zakharova, spokeswoman for the Russian Foreign Ministry, said on Telegram that Kalibr cruise missiles had destroyed a Ukrainian “military infrastructure facility” in Odesa.

Corn futures rose as much as 2.8% on Monday before paring gains to 1.2%, while soybeans were little changed.