The surge in the world’s fourth-most populous country is being accompanied by what are now tragically familiar stories.
By Bloomberg 25 Jul 2021  00:01 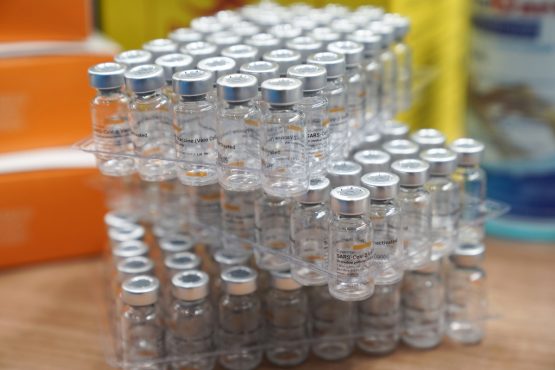 The pandemic has a new epicentre, with Indonesia taking the lead in the dismal Covid-19 stakes after a recent streak of 50,000 infections a day.

The surge in the world’s fourth-most populous country is being accompanied by what are now tragically familiar stories. Hospitals are short of life-saving oxygen and drugs, and people are dying alone, their loved ones absent or behind protective screens. Indonesia is seeing more than 1 000 virus fatalities every day, with a fresh record of 1 566 deaths registered on Friday.

Across the world in the UK, however, 50 000 cases has an entirely different impact. The nation eased a raft of pandemic restrictions on July 19, dubbed “Freedom Day” by the local press. Revelers jammed nightclubs for the first time in months, commuters can ride the train mask-free and diners are eating out without seating and capacity limits. Despite the jump in infections, around 50 people are dying each day.

The key difference? Vaccination. More than half the population in the UK — 55% — is fully inoculated against Covid, including most of its elderly and those at high risk, providing protection from serious disease and hospitalisation. In Indonesia, just 6% of people are fully immunized. Shots are scarce and the population is scared and vulnerable, unable to fend off a pathogen that has stalked the world since late 2019.

As richer nations turn back the clock, holding film festivals, fashion weeks and football championships once again, the worst health crisis in a generation continues to sweep the developing world, shuttering economies and dashing livelihoods. It’s the manifestation of what the World Health Organisation warned about months ago: a “catastrophic moral failure” from the rich-poor divide in vaccine access. The lack of protection in emerging economies like Indonesia and, earlier, India and parts of Latin America, is not only deadly for individuals and devastating for local communities, it’s imperiling the world.

“It’s a toxic cocktail for disaster, and it’s going to be very hard to avoid,” said Joanne Liu, professor of global health at McGill University in Montreal and the former international president of Doctors Without Borders. “It’s like climate change. We see it coming, we don’t know how we’re going to stop it — it needs a huge collective effort.”

The delta variant now coursing through the globe shows what can happen when Covid is allowed to flourish. Its turbocharged transmissibility is responsible for rising infection rates even in nations that are awash in vaccines, like the US and UK.

The strain was first identified in India, a giant in vaccine production. But constraints in supplies of key ingredients, logistical challenges and governmental complacency meant it’s been slow to get shots in arms. By the time the severity of India’s recent wave became clear, it was too late. Delta was upon them and in over a hundred other countries.

The danger from Indonesia and other developing nations spawning new outbreaks is even greater. The small number of people who have been vaccinated there mainly received doses from Chinese manufacturers or AstraZeneca Plc, shots that are less effective at preventing Covid than the messenger RNAs that dominate in the US. That makes widespread coverage critical. Without it, the virus has time to mutate even further, raising the prospect of another strain developing that could be even more dangerous than delta. Motorists line up for the Covid-19 vaccine at a mass vaccination site inside the Darlington Raceway in South Carolina, on March 5.

Developed countries eyeing full vaccination of their populations, and even boosters, have more than ethical concerns to worry about, said Marc Baguelin, a lecturer in infectious disease epidemiology at Imperial College London and an expert in disease modeling.

“It also means that we are fueling the chance of having new variants appear, which would threaten rich countries again,” he said. “It shows us how fragile our situation is.” In some parts of the developing world, the pandemic has never been so bad. And for those on the ground, impotence rules.

Bayu Soedjarwo started panicking when he saw, via Zoom, his mother gasping for air in a hospital bed. She clearly needed a ventilator, but there were none available at the hospital in Jakarta, Indonesia’s capital, where she’d been admitted. For the next 12 hours, the business executive made frantic phone calls and blasted messages across chat groups, Facebook and Instagram, asking for help. Soedjarwo and his brother called dozens of hospitals and visited six, unable to find any close by that could offer more support.

The family thought they’d done everything right. Sri Hartini Soedjarwo, the 83-year-old matriarch, had received two doses of the vaccine made by China’s Sinovac Biotech Ltd., the backbone of Indonesia’s rollout, which until recently was focused on healthcare workers and the elderly. After she tested positive for Covid, the trip to the hospital was seen as a precautionary move.

“Initially we weren’t so worried, because she had completed her vaccination with Sinovac,” Soedjarwo said. “But her condition worsened after a third day.”

Soedjarwo didn’t give up. He sourced a drug not on Indonesia’s official list of Covid-19 medications that doctors said may nonetheless help as a last resort. But there wasn’t anyone to administer it in the overwhelmed hospital, and his mother died just before dawn.

“It was too late for her,” he said. “In normal times, we would’ve all been there holding her hand as she went. I was devastated.”

While breakthrough infections — cases in fully inoculated people — are occurring around the world, they’re more common in places deploying less potent vaccines. Sinovac’s efficacy at preventing Covid is between 50% and 80% across a range of clinical trials, while mRNA shots have rates of more than 90%.

The true number of infections in Indonesia is still unclear due to low testing levels, said Dicky Budiman, an epidemiologist from Griffith University in Queensland, Australia. Cases are likely four times higher than the official daily numbers, a problem as undetected disease allows the virus to continue spreading. Indonesia reported 49 071 new confirmed cases on Friday. Covid-19 patients are treated in a emergency tent set up outside a hospital to handle an overflow of coronavirus patients in Yogyakarta, Indonesia on July 16.

Government mistakes and disorganization have also compounded the vulnerability of developing countries. The lack of vaccines and the delta variant alone aren’t responsible for surging infections.

In Indonesia, political leaders reacted slowly to rising case levels and resisted a full lockdown to spare the economy. Fatigue with the pandemic and the virus threat also made people more complacent.

Other mostly developed countries grappling with similarly low vaccination rates, including Australia and New Zealand, have managed to avoid surging outbreaks thanks to effective containment measures, like border curbs and quarantines.

“How is it that a person was punished for not wearing a mask inside his own car while driving alone, while at the same time you still allow family members living in different households to visit each other?” he said. “There isn’t a clear guidance on this.”

But it’s been challenging for many developing countries to get access to vaccinations, especially the most powerful two dose mRNA shots. By funding development and fast-tracking approvals, rich nations got to the front of the queue and snapped up the initial production runs. Even as manufacturing ramped up, skyrocketing demand from countries experiencing outbreaks, including India, has limited the available supply.

Indonesia said at the end of last year that it planned to purchase 50 million doses of Pfizer’s shot, though the contract wasn’t signed until this month.

To try and halt the spike in cases, which topped 56 000 on July 15, Indonesia imposed its tightest ever curbs this month. The goal is to cut mobility by at least 30% to slow the spread of the delta variant, which now accounts for about 90% of active cases, said Luhut Binsar Panjaitan, who is in charge of coordinating pandemic response for the economic centers of Java and Bali.

Yet while social distancing and other mitigation measures can slow the spread of the virus, getting past the pandemic will ultimately depend on building immunity, ideally via vaccination.

Baguelin at Imperial College says maybe in five years there will be widespread global immunity.

“Then it will be a different picture,” he said. “For the next year at least, there will be some constant threat from variants and a resurgence.”

That goal could be pushed back further if rich nations with significant purchasing power decide to give boosters amid concerns about receding immunity and emerging variants, rather than to rectify the existing imbalance. A healthcare worker administers a dose of the AstraZeneca Covid-19 vaccine in Jakarta, on May 25.

The virus flareups now being seen from Asia to Africa are an inevitable consequence of the vaccination shortfall amid the rise of the delta variant, said S.V. Mahadevan, director of South Asia Outreach at the Center for Asian Health Research and Education at Stanford University Medical Center.

“The longer people stay unvaccinated, and the longer the virus has a chance to replicate and mutate in those populations, then we all as a world are at risk,” he said. “That’s the truth — because we don’t know what is next.”