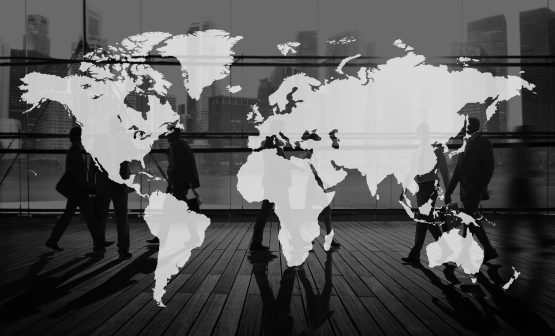 Three Group of Seven interest-rate decisions along with data accounting for 40% of global gross domestic product will provide a temperature check for the crisis-disfigured world economy this week during its most traumatic year for generations.

While the U.S. and euro regions may have achieved unprecedented growth rebounds in the third quarter, that will only serve to underscore the volatility and disruption inflicted by the coronavirus – as opposed to any meaningful repair to the damage caused. 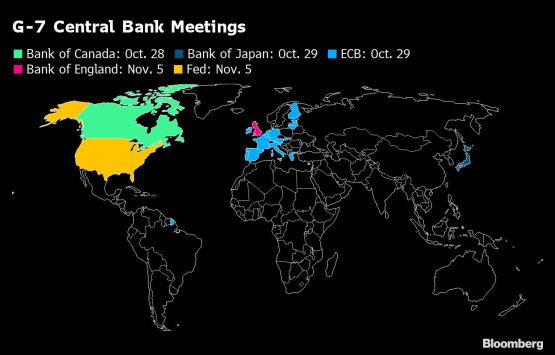 Concurrently, the central banks of Canada, Japan and the euro area are all likely to signal renewed anxiety at the persistence of the disease and its lingering impact at a time of resurgent infections in Europe.

The cumulative snapshot of growth and policy on three continents will form a definitive backdrop on the state of the world economy before the U.S. election the following week.

In the aftermath of that vote on Nov. 3, decisions by the Federal Reserve and the Bank of England will then complete the latest sweep of G-7 monetary authorities determining borrowing costs and stimulus across the bloc.

What Bloomberg’s economists say…
“The week ahead is set to bring good news about the past, bad news about the future. In the U.S., third quarter GDP will show a record expansion, but with stimulus talks stalled and the virus case count rising, the outlook is darkening. In Europe, we expect ECB President Christine Lagarde to acknowledge intensifying risks to the recovery, and signal further support ahead.” -Tom Orlik, chief economist

Bank of Canada
The central bank in Ottawa has made a long-term commitment to keep interest rates at historic lows and will use the rate decision Wednesday to reinforce that guidance.

That means holding the benchmark interest rate at 0.25%, reiterating that it will likely stay there for years, and pledging to continue buying government bonds to support that policy.

Yet, with growing concern the Bank of Canada could end up cornering the market for Canadian debt, officials are under pressure to provide some details on how it could temper its reliance on asset purchases without tightening policy.

Bank of Japan
Officials in Tokyo are widely expected to hold fire on Thursday. Governor Haruhiko Kuroda will likely reiterate the need to monitor the effectiveness of the bank’s virus-response measures and his resolve to take swift action if needed. The Bank of Japan will also release updated growth and inflation forecasts that will continue to show prices falling in the current fiscal year.

The BOJ’s focus on providing funding for struggling firms and calming markets through asset buying has put its inflation campaign on the back seat for now. Policy makers are likely to argue that with only minor tweaks to the projections, the base scenario for the economy to gradually pick up remains unchanged. Still, the figures will again raise the question of what else the central bank can do to reach its distant 2% inflation target over the long run.

European Central Bank
The meeting of policy makers in Frankfurt on Thursday will be dominated by discussions on the impact that the sudden resurgence of the pandemic could have on the recovery — and whether more stimulus is already needed.

What President Christine Lagarde described as a strong rebound over the summer months now risks turning into a double-dip recession after countries from Ireland to France and Germany imposed new restrictions to stop the spike in virus infections.

Most economists expect the ECB to keep its 1.35 trillion euro ($1.6 trillion) emergency bond-buying program unchanged for now, with roughly half of the money from the package still waiting to be spent. Officials also have reasons to wait until December to unveil additional stimulus, when new forecasts will allow them to to better calibrate the response. The expectations are that the program will get additional 500 billion euros and be extended until the end of 2021.

The rest
Brazil’s central bank on Wednesday is expected to keep its key rate at a record low 2%, and most observers see it staying there deep into 2021. Colombia’s central bank is poised to snap a seven-month easing cycle and hold at 1.75%. Among other monetary decisions due are those of Kazakhstan, Georgia and the Dominican Republic. Rebounding growth
The U.S. economy probably charged ahead in the third quarter at the fastest pace in official data back to the 1940s as pandemic restrictions were lifted. Economists project the report on Thursday to show GDP increased at a 32% annualised rate, with a record gain in consumer spending. But the devastation wrought by the coronavirus will linger: total inflation-adjusted economic output is seen remaining below the $19.3 trillion at the end of 2019. 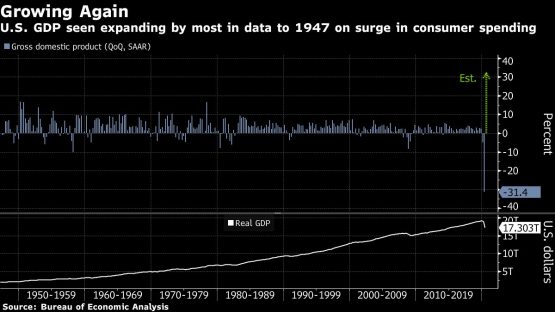 The euro-area economy probably expanded more modestly during the quarter — but still by a record. The 9% increase seen by economists will also be insufficient to erase the contraction of the first half of the year. The data on Friday are likely to be overshadowed by negative economic confidence readings, falling consumer prices and forecasts of stagnation in the current three-month period because of a resurgence in coronavirus cases. 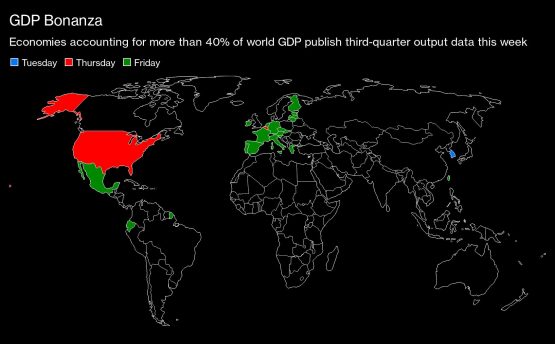 Individual GDP readings also are due for nine the region’s economies, including of its biggest – Germany, France, Italy, Spain.

Elsewhere in the world, South Korea and Mexico will reveal growth data for the third quarter too.