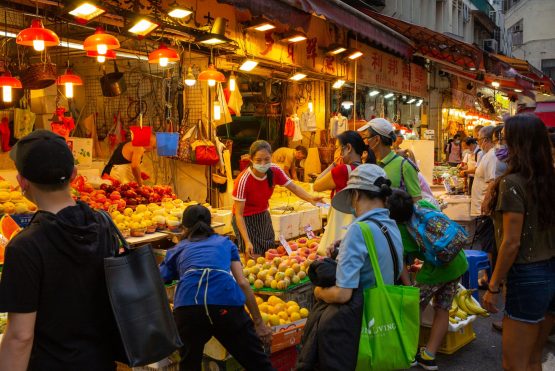 The world economy is on course for its fastest growth in more than a half century this year, yet differences and deficiencies could hold it back from attaining its pre-pandemic heights any time soon.

The US is leading the charge into this week’s semi-annual virtual meeting of the International Monetary Fund, pumping out trillions of dollars of budgetary stimulus and resuming its role as guardian of the global economy following President Joe Biden’s defeat of “America First” President Donald Trump. Friday brought news of the biggest month for hiring since August.

China is doing its part too, building on its success in countering the coronavirus last year even as it starts to pull back on some of its economic aid.

Yet unlike in the aftermath of the 2008 financial crisis, the recovery looks lopsided, in part because the rollout of vaccines and fiscal support differ across borders. Among the laggards are most emerging markets and the euro area, where France and Italy have extended restrictions on activity to contain the virus.

“While the outlook has improved overall, prospects are diverging dangerously,” IMF Managing Director Kristalina Georgieva said last week. “Vaccines are not yet available to everyone and everywhere. Too many people continue to face job losses and rising poverty. Too many countries are falling behind.” 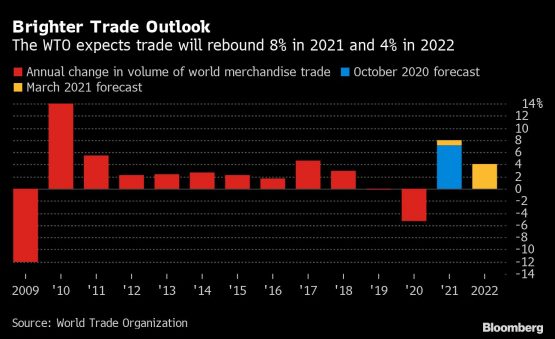 The result: It could take years for swathes of the world to join the U.S. and China in fully recovering from the pandemic. By 2024 world output will still be 3% lower than was projected before the pandemic, with countries reliant on tourism and services suffering the most, according to the IMF.

The disparity is captured by Bloomberg Economics’ new set of nowcasts which shows global growth of around 1.3% quarter on quarter in the first three months of 2021. But while the US is bouncing, France, Germany, Italy, the UK and Japan are contracting. In the emerging markets, Brazil, Russia and India are all being clearly outpaced by China.

For the year as whole, Bloomberg Economics forecasts growth of 6.9%, the quickest in records dating back to the 1960s. Behind the buoyant outlook: a shrinking virus threat, expanding US stimulus, and trillions of dollars in pent-up savings.

Much will depend on how fast countries can inoculate their populations with the risk that the longer it takes the greater the chance the virus remains an international threat especially if new variants develop.

Bloomberg’s Vaccine Tracker shows while the US has administered doses equivalent to almost a quarter of its people, the European Union has yet to hit 10%, while rates in Mexico, Russia and Brazil are below 6%. In Japan the figure is less than 1%.

“The lesson here is there is no trade-off between growth and containment,” said Mansoor Mohi-uddin, chief economist at the Bank of Singapore Ltd. Former Federal Reserve official Nathan Sheets said he expects the US to use this week’s virtual meetings of the IMF and World Bank to argue that now is not the time for countries to pull back on assisting their economies.

It’s an argument that will be mostly directed at Europe, particularly Germany, with its long history of fiscal stringency. The EU’s 750 billion-euro ($885 billion) joint recovery fund won’t start until the second half of the year.

The US will have two things going for it in making its case, Sheets said: A strengthening domestic economy and an internationally respected leader of its delegation in Treasury Secretary Janet Yellen, no stranger to IMF meetings from her time as Fed Chair.

But the world’s largest economy could find itself on the defensive when it comes to vaccine distribution after accumulating massive supplies for itself. “We will hear a hue and cry emerge during these meetings for more equal access to vaccinations,” said Sheets, who is now the head of global economic research at PGIM Fixed Income.

And while America’s booming economy will undoubtedly act as a driver for the rest of the world by sucking in imports, there could also be some grumbling about the higher market borrowing costs that the rapid growth brings, especially from economies which aren’t as healthy.

“The Biden stimulus is a two edged sword,” said former IMF chief economist Maury Obstfeld, who is a now senior fellow at the Peterson Institute for International Economics in Washington. Rising US long-term interest rates “tighten global financial conditions. That has implications for debt sustainability for countries that went deeper into debt to fight the pandemic.”

JPMorgan Chase & Co. chief economist Bruce Kasman said he hasn’t seen such a wide gap in 20 to 25 years in the expected out-performance of the US and other developed countries when compared with the emerging markets. That’s in part due to differences in distribution of the vaccine. But it’s also down to the economic policy choices various countries are making.

Having mostly slashed interest rates and started asset-purchase programs last year, central banks are splitting with some in emerging markets beginning to hike interest rates either because of accelerating inflation or to prevent capital from flowing out. Turkey, Russia and Brazil all raised borrowing costs last month, while the Fed and European Central Bank say they won’t be doing so for a long time yet. 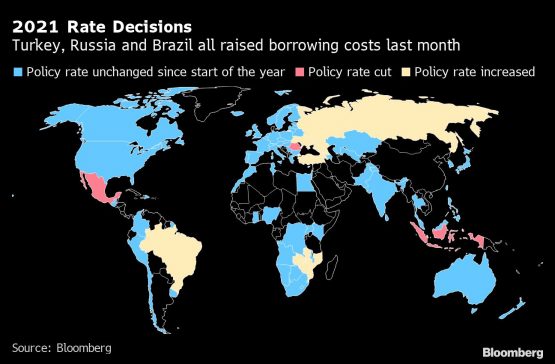 “With major developed market central banks experimenting on how hot they can run economies before inflation becomes a problem, emerging market central banks will need to be extra careful to not fall behind the curve, and will likely need to lead, rather than follow, their developed market counterparts in the next rate hiking cycle,” said Subbaraman.

In an April 1 video for clients, Kasman summed up the global economic outlook this way: “Boomy type conditions with quite wide divergences.”

Between the US$ and the AUD (A$), which of the two currencies would be regarded as the safest from geopolitical events (for example, the US losing it’s Naval/military dominance in the Asia-Pacific region, as result of numerically increasing strength of China’s naval forces)

The USD could have a lot to lose (after losing & withdrawing from Naval protection in Asia), as the high debt to GDP ratio of the US (108% last time i checked), is kept in place being a major global ‘reserve currency’. When the trust in a declining reserve currency wanes, after US military losses, how will it impact one’s foreign investments (mostly held in USD).

Then the Aussie Dollar. Currently benefitting from a resources boom. Australia (and NZ)’s shipping routes will be at the mercy of the Chinese naval fleet…once big-brother US’s influence wane in this Asia-Pacific region.
Would the A$’s value cope with an Australia completely isolated, very far from friendly USA?

Perhaps the Euro region a safer monetary bet? (despite a seemingly fragile union, and now without UK). Or pool your global/offshore investments in Yuan perhaps.

The reason why USA won WW2 is due the production capacity churning out war material, at a higher rate than Deutchland, the Fuhrer, or the Rising Sun empire.

The US is no longer the global manufacturing leader (it WAS in the 1940’s – 70’s). Now the US is more of a ‘consumption/services’ economy (US citizens sitting back & enjoy their lifestyles)….and the Chinese are still going through a manufacturing economy. It means drawn out conventional WAR is to be avoided with countries with strong manufacturing capabilities, eg China.

A few thousand years back, if you predict the fall of the Roman empire….the wealthy would not invest too much in Roman currency of the day.