Ukraine summoned the Turkish ambassador, citing an ‘unacceptable situation’ after authorities in Turkey released a Russian vessel that Kyiv said was shipping grain seized from an occupied port.
By Bloomberg News 7 Jul 2022  16:37 The risk of potential disruption from Russia prompted a continued rally in European natural gas. Germany, Europe’s largest economy, braced as the Nord Stream 1 pipeline — the main conduit to the continent — is set to close next week for annual maintenance, with speculation emerging that it won’t return to full service.

Foreign ministers from the Group of 20 nations began arriving for a two-day meeting in Bali where Russia’s war is expected to dominate. Ukraine summoned the Turkish ambassador, citing an “unacceptable situation” after authorities in Turkey released a Russian vessel that Kyiv said was shipping grain seized from an occupied port. A Russian missile struck the Donetsk city of Kramatorsk on Thursday with casualties reported, with city’s mayor said. Russia attacked the Odesa region with missiles overnight, destroying two agricultural facilities and hitting Snake Island, the strategic outpost off the Black Sea coast that Moscow’s forces abandoned a week ago, local authorities said. Ukrainian forces raised their nation’s flag on the island early Thursday. Also hit was the Moldovan-flagged tanker “Millennial Spirit” which has been adrift for four months after shelling early in the war. In the east, Russian troops attempted to establish full control over Luhansk, Ukraine’s General Staff said.

Zmiinyi island (Snake Island) is an area of freedom, as the whole #Ukraine is.

Step by step, the brave #Ukrainian soldiers liberate our territories till all the peaceful cities and villages see ???????? in their sky.

Ukraine gained a lot from their relationship with Johnson, first and foremost of which was military support, Zelensky told CNN’s Wolf Blitzer in an interview on Thursday.

The Ukraine leader told the pair that he counts on Congress’s support for the continued delivery of modern air defense systems. His comments came a day after he said that “finally” Western artillery has “started working very powerfully” for Ukraine.

Zelenskiy said he wants “to allow women with children (to) return home by Sept. 1” when the new school year will start in Ukraine.

The loan is to help Ukraine’s “acute funding gap exacerbated by war,” according to a statement on the website of the EU parliament.

“Ukraine’s external financing needs ballooned due to the Russian invasion: besides the tremendous damage to roads, bridges, factories, houses, hospitals and other physical infrastructure, the country has also lost its access to the international financial markets.” The approved loan is the first part of 9 billion euros in planned macro financial assistance for Kyiv

Poland is considering building a large grain terminal as part of efforts to help move Ukrainian grain to the Baltic port of Gdansk for export, its agriculture ministry said. Poland sees a chance to use 15 trains with special adapters to avoid the need to change to a different track gauge between countries. Other proposals include streamlining veterinary procedures.

Ukrainian International Airlines started charter flights this months for Polish tourist operator Itaka, the company said by email. A Ukrainian Boeing 737-900 will be based at Katowice Airport in southern Poland and serviced by four Ukrainian crews.

Ukrainian International will service flights from Katowice to destinations around the Mediterranean, the Red Sea and the Canary Islands.

Ukraine summoned the Turkish ambassador, citing an “unacceptable situation” after authorities in Turkey released a Russian-flagged vessel that Kyiv said was shipping grain seized from the Ukrainian port of Berdyansk.

“The Ukrainian side has received this information with deep disappointment,” the Foreign Ministry said in a statement on Thursday, calling for an investigation and a “comprehensive answer” to the events.

The Ukrainian chief prosecutor’s office last week asked Ankara to detain the Zhibek Zholy and confiscate its cargo of about 7,000 tons of grain.

German Vice Chancellor Robert Habeck made a public plea to Canada to release a turbine that’s caught up in sanctions against Russia and critical for gas flows. He said the equipment for the Nord Stream 1 pipeline needs to be returned before maintenance work begins on Monday — eliminating an excuse for Putin to keep the conduit closed.

“I’ll be the first one who will fight for a further strong EU sanction package, but strong sanctions means it must hurt and harm Russia and Putin more than it does our economy,” Habeck told Bloomberg. “Therefore, I ask for understanding that we have to take this turbine excuse away from Putin.”

Romania reopened a Soviet-era rail link connecting its Danube River port of Galati to Ukraine a month earlier than expected to help boost vital grain exports from its neighbour. Ukraine grain exports, blocked from leaving key Black Sea ports, have been confined to road, river and rail routes to European countries, with shipments well below the normal pace.

“Its accuracy is exactly as needed. Our defenders inflict very noticeable strikes on depots and other spots that are important for the logistics of the occupiers. And this significantly reduces the offensive potential of the Russian army,” Volodymyr Zelenskiy said Wednesday in his nightly video address to the nation.

Zelenskey said large parts of Kharkiv’s National Pedagogical University were destroyed Wednesday by a Russian missile strike. “When it comes to the definition of barbarism, this strike fits the bill the most,” he said.

Natural gas in Europe headed for the longest stretch of daily gains in more than nine months as persistent fears of deeper supply cuts by Moscow spread through the market.

Benchmark futures, which have doubled their value over the past month, rose as much as 4.7% for a seventh day of increases. The crisis has also sent power prices to record highs as Russia’s tightening hold on energy supplies brings the risk that Europe may struggle to keep the heat and lights on this winter.

Putin’s invasion of Ukraine has forced several countries to backpedal on the European Union’s “Fit for 55” plan for decarbonization, to compensate for cuts in Russian fuel supplies. European countries have burned more coal, planned new liquefied natural gas terminals, and extended the region’s network of gas pipelines since February.

The climate plan announced last July by the European Commission proposed tightening its existing cap-and-trade system for carbon emission permits, ramping up renewable power, and phasing out cars with internal combustion engines to slash emissions by 55% by 2030 from 1990 levels. The war in Ukraine has highlighted the degree to which those ambitions relied on gas piped from Russia. 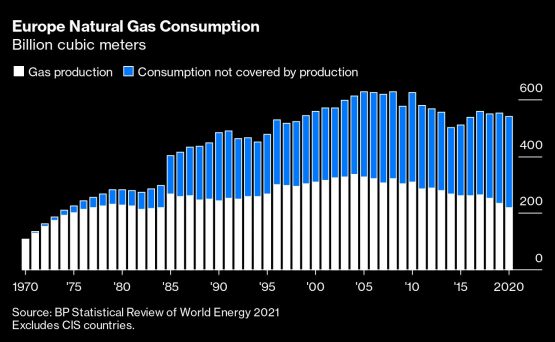 The remarks from the German chancellor come as his country faces the prospects of further cuts in gas flows, with the Nord Stream pipeline, the main gas conduit to Europe, set to close for maintenance next week. Concerns are mounting that the pipeline won’t return to full service after the work.

“Germany has relied for too long and too one-sidedly on energy deliveries from Russia,” Scholz said at an event of the BEE renewable energy business association in Berlin. “Today we have to admit: Russia uses energy as a weapon. No one actually believes that Russia is reducing its gas supplies for technical reasons alone,” Scholz added.

The US and its partners have been exploring ways to limit Russian oil revenues while minimizing the impact on their own economies. The range spans from what is believed to be Russia’s marginal cost of production and the price of its oil before the Feb. 24 invasion.

A more specific threshold would depend on market conditions when a cap is agreed and those could change significantly. The aim is to cut Moscow’s revenue for its war in Ukraine but the risk is that poorly executed measures would lead to a spike in oil prices.