Russia is developing a way to pay its Eurobond debt that would sidestep the western financial infrastructure.
By Bloomberg News 30 May 2022  07:33

Ukrainian President Volodymyr Zelenskiy visited front-line troops in the Kharkiv region in his first trip away from Kyiv since Russia’s invasion. He also fired the head of the security service in the region for what he saw as a dereliction of duty.

Russia is developing a way to pay its Eurobond debt that would sidestep the western financial infrastructure, now mostly off-limits because of the Ukraine war, Finance Minister Anton Siluanov was cited as saying in an interview with Vedomosti.

European Union nations failed to agree on a deal Sunday on a revised package of sanctions over Moscow’s invasion ahead of a leaders’ summit in Brussels but talks will continue. Serbia got an assurance from Russia on uninterrupted gas supplies.

Russia to Settle Eurobond Debt in Mirror of EU Payments for Gas (1:12 a.m.)

Foreign investors can open accounts in Russian banks in rubles and hard currency to receive payment, the finance minister told the business newspaper published in Moscow. In short, it’s a reverse-image of the way European nations now pay for Russian gas while avoiding obstacles imposed by sanctions.

“This is how it works for gas payments: we get foreign currency, then it is converted to rubles” on behalf of the gas buyer, Siluanov said. “The Eurobond settlement mechanism will operate in the same way, but in the opposite direction.”

Zelenskiy said he fired the head of Ukraine’s security service in the Kharkiv region, where he handed out medals earlier Sunday to troops fighting Russian forces.

“I dismissed the head of the Security Service of the Kharkiv region because, since the beginning of the war, he has not been trying to protect the city and was thinking only of himself,” Zelenskiy said on Telegram. He didn’t elaborate or provide the official’s name.

European Union nations failed to agree on a deal Sunday on a revised package of sanctions over Moscow’s invasion of Ukraine ahead of a leaders’ summit in Brussels but talks will continue during the week.

Hungary is so far refusing to back a compromise despite proposals aimed at ensuring its Russian oil supplies, according to people familiar with the talks. EU ambassadors are scheduled to meet again Monday morning, but the lack of a deal means that sanctions could be a prime topic at the bloc’s two-day meeting starting Monday. An EU official said a deal is still possible in the coming days.

The EU’s foreign policy chief spoke with Ukrainian Foreign Minister Dmytro Kuleba on Sunday ahead of a two-day European Union summit to start on Monday in Brussels.

Called @DmytroKuleba ahead of #EUCO. EU continues facilitating delivery of military assistance. Agreed on urgency to advance on sanctions

The EU’s next sanctions package, more weapons deliveries to Kyiv, and breaking a Russian blockade on Ukraine’s grain exports are expected to be on the agenda.

Volodymyr Zelenskiy traveled to the Kharkiv region to visit front-line positions of Ukraine’s military. He handed medals to service members and was briefed on the operational situation.

“I want to thank each of you for your service. You risk your life for all of us and our state. Thank you for defending Ukraine’s independence. Take care of yourself!” Zelenskiy said.

It was the first publicly known foray to troop positions outside the immediate Kyiv area for Ukraine’s president since before Russia’s invasion on Feb. 24. Clad in a bulletproof vest, he observed bombed-out Russian military vehicles and saw heavily damaged apartment blocks.

In attempting to hold Sievierodonetsk, Kyiv’s forces face the most serious challenge since the isolation of the Azovstal plant in Mariupol, according to the Institute for the Study of War, which called Moscow’s efforts to seize control of the Luhansk city “a desperate and bloody offensive.”

Ukraine “may well suffer a significant tactical defeat in the coming days if Sievierodonetsk falls, although such an outcome is by no means certain,” the US-based military analysts said in a daily update.

Russia is paying a price for its tactical success out of proportion to any possible strategic advantage, they said, saying the town would give Moscow no particular military or economic benefit. “This is especially true because Russian forces are destroying the city as they assault it and will control its rubble if they capture it,” ISW said.

The son of a UK member of parliament will be investigated by Russia for his role in combat operations there, the Russian news agency TASS reported. Ben Grant’s mother is Helen Grant, a former minister for sport and tourism.

The former British Royal Marine will be probed for alleged mercenary activity, TASS reported, citing the Russian Investigative Committee. The Guardian reported Grant helped in the rescue of fellow volunteers after a Russian ambush north of Kharkiv this month.

European leaders are desperately trying to figure out how to get grain out of Ukraine, whose exports are normally bigger than the entire European Union’s.

Russia, accused by the United Nations of waging war on global food security, last week said it would open maritime corridors to unblock ports such as Odesa on the Black Sea if sanctions against the country were lifted.

Ukraine, though, said it was skeptical because of security concerns should it remove the defensive mines it has placed in places like Odesa. Demining its ports would leave Ukraine vulnerable to amphibious assaults. 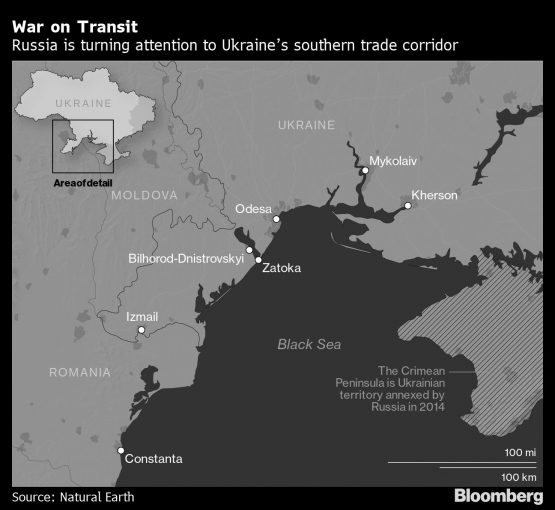 Zelenskiy repeated his assertion that Russia “is trying to squeeze at least some result for themselves” as the 100th day of its invasion on June 3 approaches. Ukraine’s president plans to address the European Council meeting set to start on Monday.

Zelenskiy said Russian forces had launched an “openly barbaric blow” with missiles and mortars on the Sumy region in northern Ukraine, far from the main Donbas front. He also said “good news” was likely from Ukraine’s allies on new military aid.

The bid by Moscow to allow humanitarian corridors for Ukrainian grain shipments in exchange for a lifting of Western economic actions “highlights the stresses sanctions are placing on the regime,” the UK defense ministry said on Twitter.

(5/6) Russia has demonstrated is it prepared to leverage global food security for its own political aim and then present itself as the reasonable actor and blame the West for any failure.

Lithuanians donated more than 5 million euros ($5.4 million) over three and a half days to buy a Bayraktar unmanned aerial combat drone for Ukraine.

The private crowdfunding initiative, which received a green light from both the Lithuanian and Turkish defense ministries, aimed to raise the amount within three weeks to buy the Turkish-made drone and ammunition. Lithuanian defense ministry officials plan to head to Turkey next week to complete the deal.

When Lithuanians say “We #StandWithUkraine“, they mean it. In 3 days, #Lithuania crowdfunded 5 million euros to buy a Bayraktar drone for Ukraine.

The European Union proposed banning seaborne oil from Russia while delaying restrictions on imports from a key pipeline, seeking to satisfy Hungarian objections and unlock its next set of sanctions on Russia.

The European Commission sent a revised proposal to the EU’s national governments on Saturday that would spare shipments of oil through the Druzhba pipeline, Hungary’s main source of crude imports, according to people familiar with the matter.

Even as Europe is looking to end its purchases of Russian oil, Asia is stepping up.