Bitcoin tumbled, heading for its worst week since January 2015, after people familiar with the matter said China aims to stop exchange trading of cryptocurrencies by the end of September.

Regional Chinese regulators were notified of the plan by a central bank-led group overseeing internet finance risks, said the people, who asked not to be named because the information is private. Bitcoin dropped 9.3% to $3 077.55 at 9:22am in London, extending this week’s decline to 28%.

The notice suggests Chinese policymakers will move quickly with their most far-reaching measure to rein in the growth of cryptocurrencies. China’s crackdown, which includes a ban on initial coin offerings announced last week, has fueled an abrupt reversal in bitcoin after the digital currency soared more than 700% in the 12 months through August. 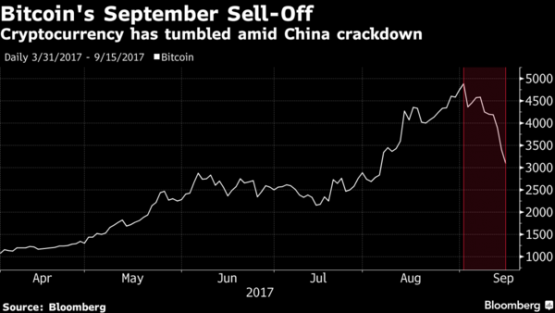 The digital currency tumbled on Thursday after BTC China, one of the country’s largest cryptocurrency venues, said it would stop handling trades by month-end. Rivals OKCoin and Huobi said they haven’t received any regulatory orders to halt. The People’s Bank of China didn’t immediately reply to a faxed request for comment.

The cryptocurrency ban will only apply to trading on exchanges, people familiar with the matter told Bloomberg on Monday. Authorities don’t have plans to stop over-the-counter transactions, the people said.

While Beijing’s motivation for the exchange ban is unclear, it comes amid a broad clampdown on financial risk in the run-up to a Communist Party leadership reshuffle next month. Bitcoin’s surge over the past few years has fueled concerns of a bubble and prompted warnings of a potential crash from skeptics including JPMorgan Chase & Co’s Jamie Dimon and billionaire investor Howard Marks.

China accounts for about 23% of bitcoin trades and is also home to many of the world’s biggest bitcoin miners, who use vast amounts of computing power to confirm transactions in the digital currency.

Some market observers have speculated that Chinese regulators will allow cryptocurrency exchanges to re-open once the government has measures in place to provide greater oversight.

Matt Roszak, the chairman of Washington-based Chamber of Digital Commerce and an investor in BTC China, said he anticipates that the exchange will resume operations by year-end.

“That is the expectation based on months of discussions — the timing of which may be impacted a bit with the ICO phenomenon,” Roszak said in an email. “China is preparing to provide licensure for less than a handful of exchanges as it grapples with the meteoric increase in cryptocurrency trading, and speculation on ICOs — licensure and engagement with government will help propel this industry forward.”

Read: Gold, bitcoin and the dollar

Predictions for an eventual resumption haven’t done much to comfort bitcoin traders. The cryptocurrency swung to a loss after Bloomberg reported the government notice and is now trading at the weakest level in six weeks.