President Xi Jinping said China must pursue "common prosperity," in which wealth is shared by all people, as a key feature of a modern economy, while also curbing financial risks. Image: Qilai Shen, Bloomberg

Investors rushed to offload Chinese tech stocks as a flare-up in Sino-U.S. tensions sparked fears that more scrutiny from Washington could be in store for the sector. 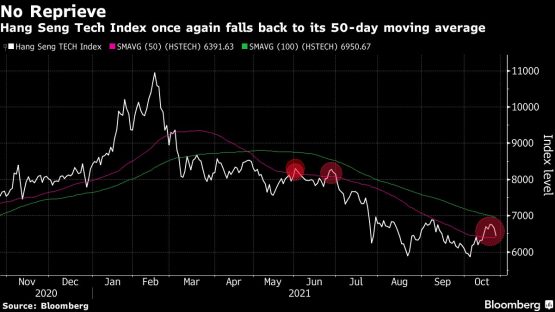 The U.S. Federal Communications Commission on Tuesday voted to force China Telecom, one of three leading communications providers in China, to close its U.S. business. On the same day, Secretary of State Antony Blinken said that the exclusion of Taiwan, which China considers part of its territory, from the UN “undermines the important work” of the international body.

“The revoking of China Telecom’s operating license seems to dampen previous hopes that the U.S.-China relations may be turning for the better,” said Jun Rong Yeap, a market strategist at IG Asia Pte. “The move has raised some doubts as to whether further escalation may bring back more U.S. scrutiny on Chinese technology players.”

Wednesday’s selloff shows sentiment is still fragile toward China’s embattled tech sector even as the Hang Seng Tech Index climbed in each of the previous three weeks. The gauge has lost about 5% so far this week. It is down more than 40% from a peak in February amid Beijing’s clampdown on private enterprises in a bid to reduce wealth gap and tame monopolistic behavior.

Investor confidence in China’s tech stocks hasn’t been fully restored “so they rush to dump those stocks at any negative news and signs of flows reversal,” said Castor Pang, head of research at Core Pacific-Yamaichi International Hong Kong Ltd.

China Telecom’s shares fell 0.7% in Hong Kong, but closed 0.7% higher in Shanghai. Shares of Chinese firms listed in the U.S. dropped overnight, with the Nasdaq Golden Dragon China Index tumbling more than 4% in its biggest loss in over a month.

China is sending smoke signals, first property and now tech,
but the greedy are blind, what can go wrong.

Hold on folks, when that wall (Wall Str.) of bricks comes down I do not want to be near.