Chinese financial markets are flashing warning signs that another round of Covid shutdowns could create more turmoil for the economy.

The Hang Seng China Enterprises Index of stocks has lost almost 9% since June 28 as a new Covid subvariant threatens to paralyze factories, dampen consumer spending and hurt construction activity. China’s yuan, meanwhile, is renewing losses against the dollar, with the onshore rate the weakest in a month. Credit stress is also intensifying as China Evergrande Group teeters near its first onshore default, after another developer’s $1 billion delinquency revived broader contagion fears. And iron ore prices have fallen to a seven-month low.

A bullish case on China based on value alone keeps failing, as does the notion that the country’s assets can be a trusty refuge for investors during periods of global market turmoil. The renewed risk-off sentiment shows how Covid Zero and crackdowns on the tech and property sectors has continued to plague investors halfway through 2022.

While official data Friday is set to show China’s economy expanded just 1.2% in the second quarter, some alternative indicators suggest activity actually shrank. At the same time, the central bank is scaling back liquidity injections, which could create tighter financial conditions for the rest of the year.

“Investors’ primary concerns are the renewed worries about potential disruptions to economic activities,” said Peter Garnry, head of equity strategy at Saxo Bank. “Mass testing and VAT rebates have been putting a lot of pressure on local governments’ budgets and limiting their capacities to stimulate the economy.”

China’s government is still betting on a stronger second half of the year for the economy to meet its growth target of around 5.5%. Beijing has been doling out more fiscal stimulus, including boosting infrastructure spending and cutting taxes for businesses, to shore up the economy. But reaching the growth target will prove increasingly challenging as China tightens restrictions again to stamp out every Covid-19 outbreak.

This week, a single case was enough to shut an entire city in one of China’s steel hubs for three days. Macau, the world’s largest gambling hub, is also shutting the majority of its businesses for a week in a return to its toughest pandemic restrictions. 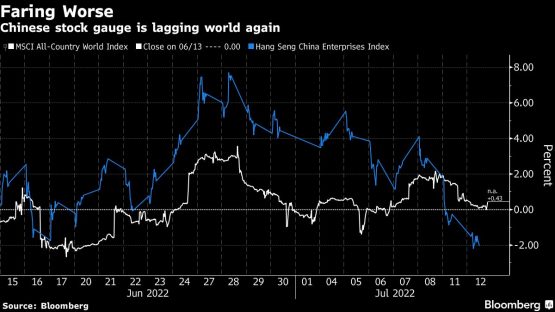 The shutdowns were accompanied by a market rout that deepened in the past two days as the Hang Seng China gauge fell 4.8%, wiping out all of its June gains. Thin trading activity may have exacerbated the moves, with volume on the index about 19% below the daily average of the past year.

Dollar bonds of Chinese developers also slumped, with stress spreading to investment-grade firms on Tuesday. Notes from China Vanke Co., the country’s second-largest builder by contracted sales, fell as much as five cents on the dollar, on track for the biggest decline since March 2020, according to prices compiled by Bloomberg. A Bloomberg index tracking Chinese junk dollar bonds is now near the lowest level in about a decade.