Currencies of Eastern European countries which are heavily reliant on Russian oil have taken a hit due to intense fighting in Ukraine.
By Shreyashi Sanyal and Anisha Sircar, Reuters 7 Mar 2022  11:21 Russia’s rouble and the Hungarian forint plunged to record lows on Monday, while the Polish zloty tumbled to multi-year declines as crude prices surged on risks of a Western ban of Russian oil, sparking global inflation fears.

The rouble slid more than 8% to 130.9350 against the dollar on the interbank rate amid a ramping up of sanctions by Western nations as Russia’s war on Ukraine intensifies.

The United States and the European Union are now mulling the possibility of banning Russian oil imports, sending prices of Brent crude futures LCOc1 to near $130 a barrel, a level not seen since 2008.

Currencies of Eastern European countries which are heavily reliant on Russian oil have taken a hit due to intense fighting in Ukraine. Hungary’s forint slid to a record low of 390.36 against the euro earlier in the day, while the Polish zloty slipped to its lowest level since March 2004.

A surge in not only oil prices but other commodities has added to global inflationary pressures, spooking financial markets further.

“Inflation will accelerate in Europe, reducing disposable income of households, and this will have negative implications for growth in Europe. This is reflected in those CEE currencies under strong selling pressure,” said Piotr Matys, senior FX analyst at In Touch Capital Markets.

Even as the euro fell to a fresh 22-month low on the dollar, currencies of other central and eastern European nations took a beating. The Czech Koruna and the Romanian Leu were weaker against the euro.

“It’s fair to assume that markets will remain in risk-off mode and the sell-off will be still led by CEE currencies,” Matys said.

Turkey’s lira slipped 0.7% against the dollar. The oil importing country’s currency also remains exposed to fluctuations in crude prices just months after being hit by a currency crisis.

Even as central banks in emerging markets have been quick to raise interest rates far before the beginning of tightening cycles in the developed world, analysts now fear that an impending rate hike by the US Federal Reserve will further strengthen the dollar and potentially hurt EM currencies.

Markets have so far priced in a slower pace of rate rises from the Fed this year, with a hike next week seen as a done deal.

Gold prices sky-rocketed past the $2000 level for the first time in 1-1/2 years amid greater appetite for safe-haven bets, helping support the commodity-linked South African rand.

The MSCI’s gauge for emerging market stocks slid 2.4%, while the eastern Europe index capped Friday with its worst weekly performance on record. 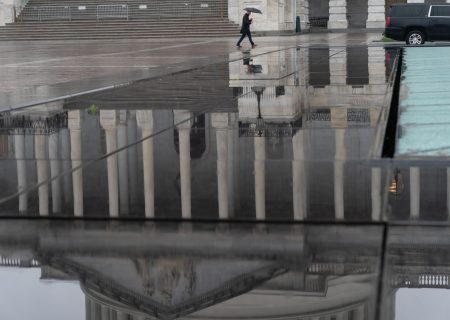