While there has already been something of a bloodbath across emerging-market currencies, there is scope for a lot more losses to come. Image: Waldo Swiegers / Bloomberg

Emerging-market currencies face further sell-downs of up to 30% if the spreading coronavirus outbreak causes US stocks to slide as much as they did in the global financial crisis, an analysis by Bloomberg shows.

The dollar may strengthen a further 30% against the Russian ruble and 23% versus the Chilean peso, according to the study that examines moves in developing-nation currencies to significant sell-downs in S&P 500 Index, and scales those to a 50% loss. In contrast, the US currency is likely to gain only 1% against the Chinese yuan. 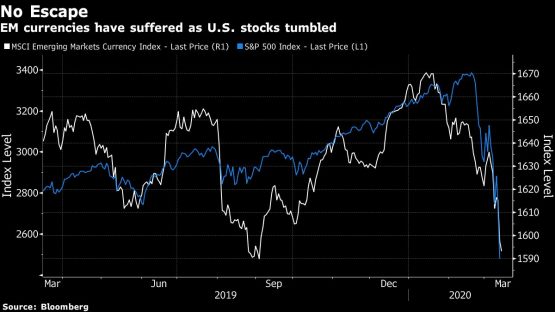 The analysis shows currencies from countries with current-account deficits and relatively illiquid financial markets are the most vulnerable to dollar strength. These include a number of nations in Latin America, along with South Africa, Indonesia, and India.

By contrast, currencies from countries with large surpluses will outperform, namely Thailand and Taiwan. One outlier is the ruble. While Russia has a current-account surplus, its currency is set to face heavy losses due to the fact a slump in the global economy typically leads to a slide in oil prices.

Turkey’s lira was found to have the biggest potential decline against the dollar among the 17 pairs included in the study, however the currency trades less freely than it used too after the authorities restricted access to swap transactions so losses may be more muted.

The relentless spread of the coronavirus and a plunge in oil prices has already seen the S&P 500 Index tumble about 25% from its closing high on February 19 to its low set last week. The dollar has jumped 20% versus the Chilean peso and 18% against the ruble during the same period.

While there has already been something of a bloodbath across emerging-market currencies, there is scope for a lot more losses to come.

A weaker Rand is at least a saviour for the Rand value of most pension funds , which have overseas (USD) exposure .

R20 for a pound.we can go nowhere where the rand is worth something. We’re screwed

Chickens coming home to roost. Destruction of confidence and industrial capacity for exports.