The prospect of a Joe Biden presidency gave cheer to emerging-market equity bulls as 2020 drew to a close. His inauguration on January 20 may come as the rally stumbles.

After a see-saw year marked by the worst selloff since the 2008 financial crisis and then the second-best annual advance of the past decade, the MSCI benchmark gauge for emerging-market stocks is trading at a record-high valuation. But the resurgence in coronavirus cases and an uneven economic recovery in the developing world are fuelling concern that prices are unsustainable.

Technical patterns that correctly predicted past selloffs suggest the gains may continue for some time, with the MSCI Emerging Markets Index’s charts still short of levels that coincided with performance peaks. But the gap between the gauge’s current levels and those trigger points is narrow, worth only a few days of gains.

That means that by the time Biden takes the oath, equities could be well into overbought, overheated territory. Coincidentally, the third week of January is also the time emerging-market investors typically pause to take stock of the new year’s outlook.

Momentum magic
The relative strength index, which measures how fast stock prices rise, is already above the 70 mark on the daily chart, signalling too much exuberance. But it is a level reached all too frequently in a bull market. The monthly RSI chart, which sits at 68, is a more reliable sign of a trend reversal. History from 2008 and 2018 shows that an equity slump doesn’t begin until the gauge significantly overshoots the 70 mark on a monthly basis. 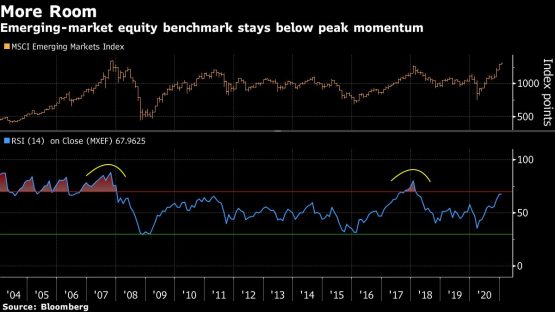 Golden trap
Golden crosses usually herald equity gains when a shorter moving average passes above a longer one on the daily chart. But when weekly levels are considered, the same pattern can turn into a bearish sign. In the past 10 years, every time the 100-week mean crossed above the 200-week line on the MSCI index, stocks started declines. We are close, but not there yet, which means the rally could go on for some time until the crossover happens. 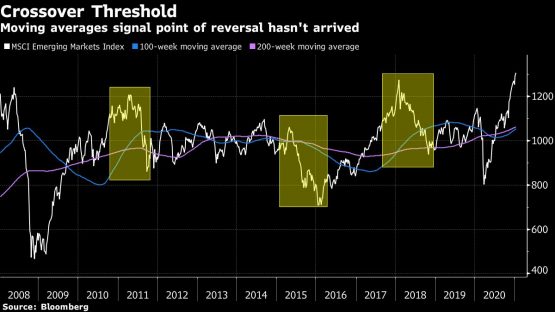 Walking the band
Bollinger Bands, a study that combines volatility and momentum, is typically used as an oscillator by traders just like the RSI. They sell when the gauge reaches the upper band and buy when it hits the bottom. But that trick works only in the short term. During sustained bull markets, the index can remain close to the upper band for long periods, a phenomenon known as walking the band. That’s exactly what’s happening now on the weekly chart.

The walk often ends when the index crosses above the upper band. Emerging markets have seen this many times before, most recently at the start of the U.S.-China trade war. Traders tracking this signal may continue to hold stocks until they see a breach of the band. Value buy
It’s not just momentum that’s underpinning this rally — fundamentals are improving too. Analysts have raised average earnings estimates for the members of the index to the highest level since March. The projections jumped in the fourth quarter by the most since 2009. While standalone valuations may look prohibitive, a comparison with U.S. stocks makes emerging markets look cheaper. The MSCI measure trades at a 33% discount to the S&P 500 Index, wider than the average 27.5% markdown in the past 10 years.

Traders have little incentive to make an exit as long as profit forecasts are rising and the valuation discount is attractive.

And wait for investors to realize that Corrupt Old Grandpa Badfinger is senile, weak and Owned By China.

The Usual Suspects such as Iran, N Korea, Russia etc are salivating at the prospect of a weak USA, with territorial gains in the offing (not to mention a Nuclear Iran). And an emboldened China will start saber rattling with Japan and Taiwan.

As the Chinese say, be careful what you wish for…