From the Floor: Greece ‘defaults’ — what next? One finger. That’s effectively all that separates Greece from the abyss after last night’s failure to meet an IMF payment left it clinging on for dear life ahead of next Sunday’s referendum vote, effectively a Yes/No choice on its membership of the European Union.

“There is a cross default implication on other loans but it seems very unlikely that we will see anything enforced on this side of the referendum,” says Michael Boye from the Fixed Income desk.

“The European Central Bank meets today to discuss the ELA emergency liquidity but this will be maintained at the current €89 billion, otherwise they are effectively pulling the rug from underneath the Greek banks,” he says. “Further talks are also due with the finance ministers today but after yesterday’s ‘last-minute’ deal headlines, don’t expect anything.”

“This referendum is in play now and has to play out.”

Markets by and large are coping with developments relatively unperturbed. German bunds are down just below 152 while peripheral bonds are faring better.

Banks too have moved quickly to cut their risk from Greece fallout with “most European banks exposure at less than 5%,” says Adam Seagrave from the Saxo London desk.

The pair is still suffering from “very thin liquidity” says Kim Nydahl Grønlund from the FX desk, who still anticipates “headline bumps” out of Greece.

If there has been a reaction, it is by and large in the FX Options space, where one-month EURUSD vols were at 24%. “It indicates that people want to pay up for euro Puts,” says Jeppe Norup from the FX Options desk in Copenhagen.

With Greece then effectively in stasis for the next day or two — give or take the very obvious risk of the odd headline risk or too — some of the focus is starting to shift once again to the possibility of a US Federal Reserve rate hike, with tomorrow’s nonfarm payrolls print likely to be a key pivot in any decision.

“If we get a strong NFP tomorrow (Friday), then we could see the September hike speculation come even more into play,” says Boye. “US Treasuries may have slipped a little in sympathy with the Greek situation but they still remain very high in anticipation of a September scenario.”

With a raft of other data due today including the ADP jobs report and the US ISM manufacturing report, a three-pronged wave of positivity could be enough to force the Fed to put the September option firmly on the table (not that it’s ever been off…), and begin the move back to normalisation, much anticipated, but certainly not realised. And it’s been quite a week too in the usually staid agricultural sector with corn in particular on “an incredibly bullish run” after a very positive US Department of Agriculture report, says Ole Hansen from the Copenhagen desk.

“There’s been a phenomenal move in grains in the last couple of days — we’re seeing a key fundamental shift here,” says Saxo Bank’s head of commodities strategy. “Hedge Funds have been very bearish on grains and are still short by 145,000 lots.”

“Once we get those out of the way, we might see some stability return to the market,” Hansen adds, reflecting on corn’s highest spike since 2010.

Palladium too was the subject of “amazing volatility” spiking $25/oz at one point Tuesday on the back of 2×200 lots buying before settling again.

“You have to dig deep here, hang in there and look at the market fundamentals,” warns Hansen. 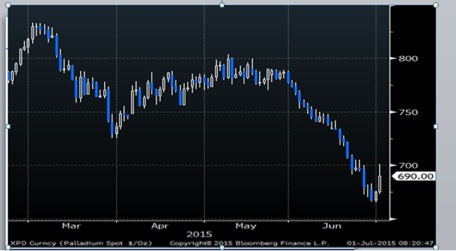 We haven’t forgotten you oil and with the peak of the demand season July 4 virtually upon us, Hansen says we must shift our attention in the US inventories report out later today to gasoline inventories.

“Refining demand starts to drop after July 4,” he says. Add that to a potent mix of Iraqi oil production rising, a nuclear deal on Iran still in the works, more US production looking likely diluted only by strong Chinese demand, and it looks likely that oil fundamentals will remain much as they have done for the last 12 months.

Martin O’Rourke is a trader on TradingFloor.com